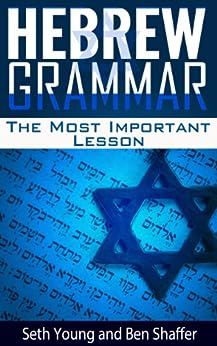 4.1 out of 5 stars
4.1 out of 5
72 global ratings
How are ratings calculated?
To calculate the overall star rating and percentage breakdown by star, we don’t use a simple average. Instead, our system considers things like how recent a review is and if the reviewer bought the item on Amazon. It also analyzes reviews to verify trustworthiness.
Top reviews

NicoleM
5.0 out of 5 stars Gender and Number Suffixes Rules Book
Reviewed in the United States on March 12, 2016
Verified Purchase
This book was short and sweet, and played an important role in re-enforcing and clarifying an important aspect of Hebrew grammar. ( Gender and number suffixes in Hebrew ).
I think those who were disappointed with the book, probably missed the fact that this book deals only with this one aspect of Hebrew grammar, the MOST important aspect (in the author's opinion).

The authors state in their introduction, "...we have come across one area of grammar which students almost always find confusing ...Gender and Number Suffixes in Hebrew" This is the entire focus of this short book.

The authors go on to state clearly, in their aims for the book, that what they "..hope to achieve....is to to teach what (they) consider to be THE most important grammar lesson of all (Gender and number suffixes). It deals with just that aspect of Hebrew grammar, because it is normally such a stumbling block to students, and because once you have mastered these particular concepts, you will have a greater grasp of how to use much of the language.

I like the fact that It is so focused. It is a great idea to isolate this vital aspect of grammar in one booklet. If it had been just a chapter in a bigger book, I probably would have rushed through it and struggled forever.I see it as an important part of a growing reference library as a relative beginner, easy to read and understand. I will refer to it often in these early stages of study.
Read more
8 people found this helpful
Helpful
Report abuse

Leigh
2.0 out of 5 stars I think I just bought a pamphlet?
Reviewed in the United States on December 18, 2017
Verified Purchase
I expected it to be a short read, but this document took me five minutes to read. The content itself was quite good, but it was more of an article and a plug for the author's other products than anything worth any money. If this were printed on paper, the content would easily fit on a pamphlet. I don't think you can justify charging for that, even if it's not much. I've read plenty of Amazon book previews much longer than the entirety of this document. A weird experience.
Read more
3 people found this helpful
Helpful
Report abuse

Baruch Rappaport
5.0 out of 5 stars An Important Book for Beginners
Reviewed in the United States on June 2, 2014
Verified Purchase
I am someone who once didn't know Hebrew, and I had to break my teeth to grasp and master the language. I have always been in favor of learning basic verb forms, and I chalk up whatever success I enjoyed over the years to putting an emphasis on memorizing basic grammar forms, including verb conjugations. And yet amazingly enough, I was never able to convince my friends of this attitude.

The content of this book is clear, easy to read, easy to understand (it seems to me, even for a beginner). And IMHO this is the way to learn the language from the beginning.

ShellyB.
4.0 out of 5 stars A Great adjuncto for the serious student.
Reviewed in the United States on November 25, 2015
Verified Purchase
Very useful in home study for me. Hebrew Grammar is my nemesis, but, I am able to master it, slowly but surely. I appreciate the concise and clear ability to follow this books' methodology. I have a deep affinity for Ben Shaefer's methodology, and wish he was my personal tutor. THIS is the next best thing. By jove, I think i've almost got it.
Read more
2 people found this helpful
Helpful
Report abuse

Susan Wollman
5.0 out of 5 stars Helped me teach
Reviewed in the United States on November 13, 2019
Verified Purchase
I teach beginning Hebrew, so I’m always on the lookout for ways to clarify concepts. This certainly helps! Thank you!
Read more
Helpful
Report abuse

dorothy kenning
5.0 out of 5 stars Five Stars
Reviewed in the United States on March 20, 2017
Verified Purchase
I am slow to learn this. Myself I am going to find a cd on pronounciation.
D. Kenning
Read more
Helpful
Report abuse

Bill Dyer
5.0 out of 5 stars Educational
Reviewed in the United States on September 26, 2018
Verified Purchase
This is a great book for someone who wants to learn more about the Hebrew language.
Read more
Helpful
Report abuse
See all reviews

bookworm
1.0 out of 5 stars Can I have my money back please?
Reviewed in the United Kingdom on June 7, 2014
Verified Purchase
Description suggested that the book would help with some of the trickier aspects of Hebrew grammar; anyone who had even briefly read the first two chapters of any Hebrew grammar book could have written this. Just as well it was cheap....though charging anything at all seems a bit. cheeky.
Read more
Report abuse

Iris Staley
5.0 out of 5 stars A Lesson to Remember
Reviewed in the United Kingdom on August 21, 2016
Verified Purchase
Excellent start lesson for those who want to learn Hebrew.
Read more
Report abuse