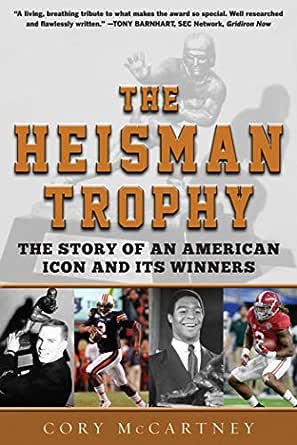 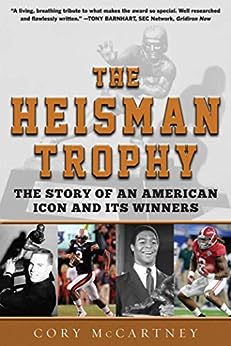 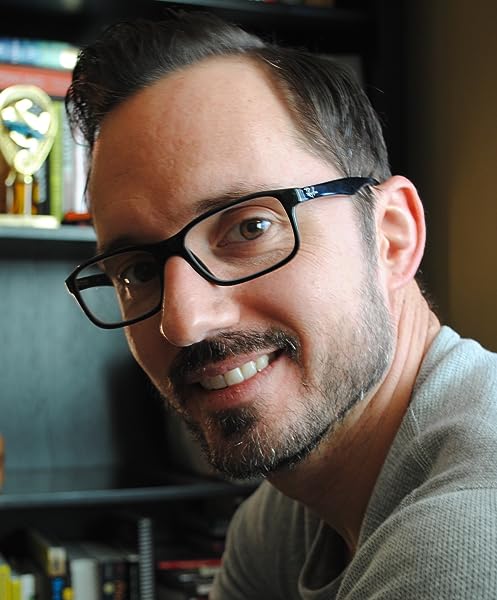 The Heisman Trophy: The Story of an American Icon and Its Winners Kindle Edition

“Cory McCartney's The Heisman Trophy isn't a dry listing of facts but a living, breathing tribute to what makes the award so special. Well researched and flawlessly written. You will learn a lot. I know I did.”
-Tony Barnhart, SEC Network, Gridiron Now

“The story of the Heisman Trophy mirrors the story of college football, from humble beginnings to its high-dollar present. That history has been written by both the famous and the flawed. Cory McCartney carefully and entertainingly covers it all.”
-Ryan McGee, senior writer, ESPN The Magazine

“Understanding the origins of our institutions, and the reluctant characters that comprise them, is central to our ability to be inspired and achieve more. It brings greatness within reach of all who seek it in our daily lives. Cory McCartney has done a masterful job of unpacking the history of the Heisman Trophy while leaving its patina which adds to the value of college football's currency: TRADITION!”
-Spencer Tillman, sr. analyst, FOX Sports 1; CEO, Axiom Sports Productions

“A must-read for college football nuts, The Heisman Trophy: The Story of an American Icon and Its Winners illustrates the rich tradition behind the most coveted award in sports. McCartney's storytelling sheds light on the trends and narratives that have shaped the Heisman's long history and offers a peek inside its exclusive fraternity of winners.”
-Zac Ellis, writer and digital media editor at Vanderbilt Athletics

“From Berwanger to Bo, from O.J. to Tebow, Cory McCartney gives college football fans the ultimate reference to the game's ultimate prize. Meticulous research, priceless memories, anecdotes you won’t find anywhere else—this book is a can’t-miss. If you don’t have an actual Heisman Trophy sitting on your shelf, you’d better have this book there.”
-Jay Busbee, lead writer, Yahoo Sports; author, Earnhardt Nation

“The Heisman Trophy: The Story of an American Icon and Its Winners is a must-read for any college football fan. Cory's ability to go beyond the headlines and dive deep into the stories of some of the game's biggest stars is perfect for the casual fan and CFB buffs.”
-Barrett Sallee, Bleacher Report

“You can't fully understand college football without also having a proper understanding of the Heisman Trophy. McCartney's new book digs deep into the history of the award and leaves readers with a greater appreciation of the movers and shakers who have contributed to its unparalleled tradition.”
-Chris Huston, editor-in-chief at Heisman.com; Heisman historian --This text refers to the hardcover edition.

Cory McCartney is a writer for FOXSportsSouth.com, a Heisman Trophy voter and a member of the Football Writers Association of America. Previously with Sports Illustrated, his work has also appeared on CNN.com, and he served as an analyst for the Big Ten Network. He is the author of Tales from the Atlanta Braves Dugout. McCartney lives in the Atlanta metropolitan area with his wife and two children.
--This text refers to the hardcover edition.

3.8 out of 5 stars
3.8 out of 5
5 customer ratings
How does Amazon calculate star ratings?
Amazon calculates a product’s star ratings based on a machine learned model instead of a raw data average. The model takes into account factors including the age of a rating, whether the ratings are from verified purchasers, and factors that establish reviewer trustworthiness.

This book gave you the trophy's history and it gave you an unbiased look (the author is a Heisman Trophy voter, which makes him intimately involved with this trophy) at what is right and what is wrong with the trophy's awarding process.

My favorite chapters or narratives of this book were Chapter 3 (A Vote Driven By Four Biases), Chapter 6 (Heisman Hindsight: How Would Bowls Change Voting), Chapter 9 (The Photographer Who Links Past and Future), and Chapter 7 (O.J., Bush, and Tarnished Bronze). You can't come away from those chapters and not want to do some research or do some deep thinking on those chapters' subjects.

Cons of this book: I don't agree with all of McCartney's postulates about the Heisman Trophy, but that's minor. I enjoyed reading this book and I'm glad I brought it.

In conclusion, buy this book if you want more education on the Heisman Trophy.

Wanpaku
TOP 50 REVIEWER
4.0 out of 5 stars A walk through the history of the Heisman award
Reviewed in the United States on June 4, 2020
Verified Purchase
It was interesting to read some of the stories of the past winners of the Heisman Trophy. The historical stuff was a good part of it, but the individual stories were well presented.
Read more
Helpful
Comment Report abuse