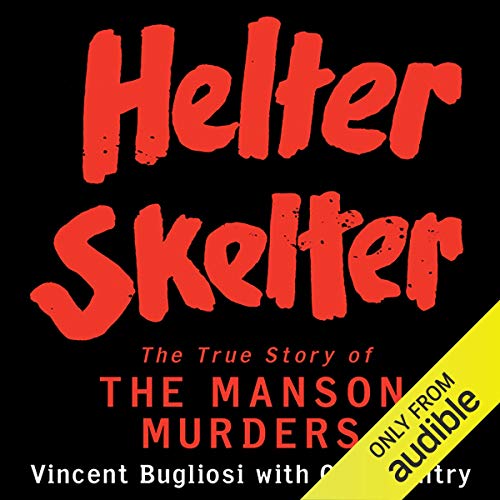 Helter Skelter: The True Story of the Manson Murders

Prosecuting attorney in the Manson trial Vincent Bugliosi held a unique insider's position in one of the most baffling and horrifying cases of the 20th century: the cold-blooded Tate-LaBianca murders carried out by Charles Manson and four of his followers. What motivated Manson in his seemingly mindless selection of victims, and what was his hold over the young women who obeyed his orders? Now available for the first time in unabridged audio, the gripping story of this famous and haunting crime is brought to life by acclaimed narrator Scott Brick.

Enjoy a free audiobook + more
Learn more about Membership
List Price: $39.95
You Save: $4.96 (12%)
By completing your purchase, you agree to Audible’s Conditions Of Use
Sold and delivered by Audible, an Amazon company
Share

4.7 out of 5 stars
4.7 out of 5
3,902 global ratings
How are ratings calculated?
To calculate the overall star rating and percentage breakdown by star, we don’t use a simple average. Instead, our system considers things like how recent a review is and if the reviewer bought the item on Amazon. It also analyzes reviews to verify trustworthiness.

Watza Matta U?
5.0 out of 5 stars Absolutely Amazing read...
Reviewed in the United States on January 28, 2019
Verified Purchase
How Vince Bugliosi ever kept track of all the characters in this hideous crime family is almost beyond belief. Lots of characters and all of them with at least two aliases. As a retired police officer, I'm amazed at the indifference of the LAPD Detectives regarding investigating obvious leads. It almost appears they were rebelling against the efficiency of ADA Bugliosi. Have worked closely with many DA's and ADAs and the determination and attention to detail of this man is beyond description. There are very few human beings that could have stitched this presentation together and then delivered it to a jury with amazing efficiency. Belated congrats, Vince. Wish I could have shaken your hand. NYSP Sgt/Station Commander (Ret)
Read more
87 people found this helpful
Helpful
Report abuse

Awesomest
2.0 out of 5 stars RATING FOR THE KINDLE VERSION - DO NOT BUY FOR KINDLE!
Reviewed in the United States on July 11, 2016
Verified Purchase
This book is really good, but I should have listened to the previous comment about the KINDLE VERSION being difficult to read. The footnotes are not accessible and where pictures should be it just says "can't put photo" or something. I bought this one week ago exactly and it will not let me return it. I wish I could return it and get the hard copy, it is really a good book but I do not enjoy reading it on the kindle because I feel like I am missing a lot and that is no fun.
Read more
118 people found this helpful
Helpful
Report abuse

robert stantonTop Contributor: Coloring
3.0 out of 5 stars No photos!
Reviewed in the United States on August 17, 2018
Verified Purchase
I am trying to replace all of my hardcover and paperback books in e-format. I bought this book in paperback back in the early 70's when it was first released.

I did not know that most, if not all, of the photos in the original paperback book are not included in this version, apparently due to permission issues, per the statement at the beginning of the book.

This information was NOT included in the book details on the Kindle app shopping page - and it should have been included.

The footnotes are included at the end of the book. Including them at the end of each chapter would have been a better choice, but at least they are there.
Read more
31 people found this helpful
Helpful
Report abuse

Tom W. Chilek
5.0 out of 5 stars "I am the devil and I have come to do the devil's business."
Reviewed in the United States on April 16, 2017
Verified Purchase
Such chilling words which began, and subsequently made known, the brutal and unspeakable crimes of the Manson Murders. Vincent Bugliosi's account of the murders and "The Family" was well written and very detailed. His book presented a wealth of interesting information that you never hear about in any television documentary. By reading Mr. Bugliosi's captivating book, the reader, not only gets a better understanding of murders and the crazy, insane motive behind them, but a better understanding of all the people, good and bad, that were involved. It's fascinating to read about all the hard work Mr. Bugliosi put into the Tate - LaBianca investigation which allowed him to successfully obtain death penalty convictions of Charles Manson, Susan Atkins, Patricia Krenwinkel, Leslie Van Houton, and a few years later, Charles "Tex" Watson. The Manson Murders were terrible, tragic event and it utimately became Mr. Bugliosi's story, which was again, wonderfully told by him. I can see why it is considered the best crime book ever written. I highly recommend this book. :)
Read more
39 people found this helpful
Helpful
Report abuse

The Irregular Reader
5.0 out of 5 stars A Classic of True Crime
Reviewed in the United States on November 20, 2016
Verified Purchase
Amazingly enough (especially considering my interest in the macabre), I had never before picked up this classic true crime account of the Manson Murders. I’m pleased to say that I have rectified that deficiency, and that I was not disappointed in the least.

Bugliosi (who was also the lead prosecutor of Manson and his co-defendants) begins the 600+ page book with the Tate murders themselves. We follow the housekeeper as she enters the property to begin her day, the trauma of the bodies being discovered, and the movements of the police who first entered the scene. We are next led along to the LaBianca murder scene (the murder of an elderly couple also committed by Manson’s “Family”). From these two bloodbaths, Bugliosi takes the reader along through the (occasionally horribly bungled) police investigation, letting us walk along with investigators as they try to make sense of such seemingly senseless killings.

As I said earlier, Bugliosi was the lead prosecutor of the case (and occasional investigator). This is certainly in evidence as Bugliosi approaches “Helter Skelter” like a trial in and of itself. Physical evidence, witness statements, and paper trails are carefully presented and thoroughly dissected for the reader. The sheer weight of evidence eventually brought together against Manson and his family is presented here in largely chronological order, and shows just how completely Bugliosi throws himself into his work. There is a good reason why Helter Skelter is considered one of the best true crime books written (easily up there with Truman Capote’s In Cold Blood).

So, grab this book and read it. For such a hefty tome, it goes by very quickly. Bugliosi’s style is intense, but highly readable. Any one who is interested in true crime will obviously love this book, but even if that isn’t your usual genre, this is a compelling read about a charismatic madman and the incredible influence he had, not only on his followers, but on the country as a whole.
Read more
28 people found this helpful
Helpful
Report abuse
See all reviews

Stephen G.
5.0 out of 5 stars Riveting, stunning
Reviewed in the United Kingdom on March 19, 2020
Verified Purchase
Each page is riveting, with a fresh revelation. Bugliosi, the prosecutor in the Manson cases, is a highly intelligent terrier in searching out ... everything. Fascinating. The brilliance results from the decision to explain the case chronologically, from the point of view of the law, and so each part becomes clearer and more devastating as time moves forward.

The ideal would be to read this book, then watch the 1973 film on YouTube "Charles Manson: the Documentary", and then, only then, watch the Tarantino film "Once Upon a Time in Hollywood" - the irony of the ending will then have great impact. That film's depiction of Manson's "Family" at the Spahn Ranch in California is masterly.
Read more
8 people found this helpful
Report abuse

Papa Dave
5.0 out of 5 stars The definitive book on Manson murders
Reviewed in the United Kingdom on October 14, 2020
Verified Purchase
This is the definitive book on the Manson murders. The whole story of these maniacs told in detail. Thankfully Manson and Atkins are dead now. It's just a pity that Watson is still alive in prison. He should have been put to death in 1970. This psychopathic killer was allowed to father children behind bars. I'll never understand a so called justice system that allowed that? Poor Sharon wasn't given the same privilege by Watson as he sliced her body up while she pleaded for her life, and the life of her unborn child. She was a beautiful woman inside and out. Had she lived I believe she'd be a big star today. Unfortunately we'll never know.
Read more
4 people found this helpful
Report abuse

A.P.M.
5.0 out of 5 stars Excellent book by the man who nailed Manson
Reviewed in the United Kingdom on June 7, 2017
Verified Purchase
An excellently detailed book, covering the whole investigation and trial of Manson and his 'family'. The battles Bugliosi had with inept Police work, even more inept forensic people, and headline seeking defence lawyers (ironically, one of whom it is suspected, was murdered by the 'family'), makes this book a must read for anyone remotely interested in the Manson case, or courtroom dramas in general. It's not an easy read in some parts, due to the gruesome detail of the murders, but it is a riveting read, which I found hard to put down. Highly recommended.
Read more
10 people found this helpful
Report abuse

Roman Clodia
3.0 out of 5 stars More legal detail than I expected, later theories offer alternative versions of the story
Reviewed in the United Kingdom on October 23, 2018
Verified Purchase
A horrific and compelling story by the Assistant DA and prosecutor of the case: it is immensely detailed and spends more time on criticising LAPD, and legal minutiae than I expected. Written in the 1970s, there have been later interpretations of the case. Coming to this from Emma Clines' The Girls, there's not as much on daily life in a cult as I thought there would be. Very strong on legal aspects and the trial including transcripts in places.
Read more
4 people found this helpful
Report abuse

Ezytouch
3.0 out of 5 stars The book that killed the Sixties...
Reviewed in the United Kingdom on August 10, 2018
Verified Purchase
An amazing book... except for the wacky gibberish about The White Album and the Race War... the facts of the murders were manipulated by white Conservatives as a lever with which to destroy the Hippy movement... of course the Manson Family were guilty of the crimes, but the Helter Skelter 'theory' is a pile of baloney.
Read more
6 people found this helpful
Report abuse
See all reviews
Back to top
Get to Know Us
Make Money with Us
Amazon Payment Products
Let Us Help You
EnglishChoose a language for shopping. United StatesChoose a country/region for shopping.
© 1996-2022, Amazon.com, Inc. or its affiliates