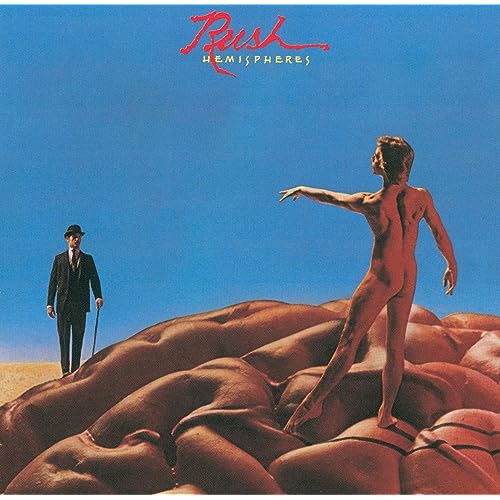 Rush
October 29, 1978
5.0 out of 5 stars 77 ratings
Buy the CD album for $10.98 and get the MP3 version for FREE.&nbspCD album ships from and sold by Amazon.com. Terms and Conditions. Does not apply to gift orders. Complete your purchase of the CD album to save the MP3 version to your Music Library.

5.0 out of 5 stars
5 out of 5
77 global ratings
How are ratings calculated?
To calculate the overall star rating and percentage breakdown by star, we don’t use a simple average. Instead, our system considers things like how recent a review is and if the reviewer bought the item on Amazon. It also analyzes reviews to verify trustworthiness.
Top reviews

classicalsteve
5.0 out of 5 stars When Rush was still Rush: A Triumph of One of the Best Cerebral Rock Albums of All Time
Reviewed in the United States on June 15, 2018
Verified Purchase
Rush at the pinnacle of their early and best sound. There is probably no other album which better exemplifies the "Rush" vision than "Hemispheres". The story of "Hemispheres" comprises the first half of the album, a sequel to the last part of their album "A Farewell to Kings". In "A Farewell to Kings", the last segment Cygnus X-1 Book I chronicles the flight of a space traveler into the heart of the black hole Cygnus X-1. Book II: Hemispheres chronicles a planet whose people are eventually engaged in civil war because they can't decide which god to worship. Worshipping Apollo, god of intellect inspired them to build cities, and yet they ended up feeling empty. Dionysus, the god of wine and love brought them pleasure until the winter arrived and they starved. The space traveler going through the black hole Cygnus becomes the god to reconcile the two.

The next two songs, Circumstances and The Trees, are just very Rush, exploring social issues as they have done in much of their material. The final piece is a rock instrumental.

Hemispheres is just about as quintessentially Rush as can be. Although the ideas explored in Cygnus X-1 Book II: Hemispheres may have been explored before in other artistic expressions, Rush makes up for it with amazing music. Part of Rush's sound is not just the Getty Lee's vocals and Alex Lifeson's guitar but also Lee's bass which is almost as prominent an instrument as the guitar. Neal Peart's drumming is not merely accompaniment but integral to the rest of the ensemble. Rush may be the only band to come close to using forms traditionally used in classical music. In terms of harmonic and melodic sophistication, the only other band to come close to classical music is Queen.
Read more
5 people found this helpful
Helpful
Report abuse

DS
5.0 out of 5 stars Probably the most enjoyable Rush album
Reviewed in the United States on February 14, 2014
Verified Purchase
Disclaimer: I don't have anything after Signals.
Other Disclaimer: when there are only 4 songs, it's easier to not have a lesser quality song.
Before giving this album a full listen, 2112 was my favorite Rush album, but I didn't like Lessons and Tears much. All the songs are tight, well done and there isn't really a bad moment on the album. I won't go into all the other stuff people are writing about transitional albums and all that. This one stands on it's own. You don't need to listed to Cygnus X-1 part 1 to understand or enjoy Cygnus X-1 part 2. Circumstances is a song that gets stuck in your head in a good way. The Trees has been a long time favorite or mine. And La Villa it just a great, fun instrumental (check out the live version from Rio though, it's phenomenal with the energy of the crowd).
Anyway, if you're buying a Rush album for the first time, this would be a good starting point (although Moving Pictures is usually where people gravitate first, which also is a good starting point).
Read more
5 people found this helpful
Helpful
Report abuse

Wisconsin Customer
5.0 out of 5 stars Masterpiece, Book II
Reviewed in the United States on May 2, 2008
Verified Purchase
As a follow up to Farewell to Kings, Hemispheres is everything it could possibly be. The two albums are linked not only by release dates and progressive creativity, but also by a light thematic link in the "Cygnus" saga. Musically, the boys are again at the top of their game with this release.

HEMISPHERES: "Cygnus X-1, Book II". A fantastic album-side epic track. It is a coherent whole, both musically and lyrically, and yet is diverse enough to remain interesting throughout. The connection to "Cygnus" from Farewell is not particulary strong (both Books might have stood alone almost as effectively), but the connection is there and I suppose it does add a little to the saga. The song also has some of the most extensive and intense singing of any Rush epic -- lots of lyrics to be sung, and not much instrumental break for Geddy (perhaps one of the reasons it's not done live anymore -- would be quite a marathon to do night after night). In any event, an amazing prog-rock epic trak, and incredibly creative.

CIRCUMSTANCES: A tight little rocker, with some incredible riffs, especially just before each chorus. A bit of a mood change at the beginning of the instrumental section, which builds back up to the power of the song's opening.

TREES: A perennial favorite live, with a classical guitar opening, a nature setting instrumental section in the middle, and some driving rock sections in between. The meaning behind the lyrics has been debated, but the ironic twist at the end is clever regardless.

LA VILLA: Hands down, the best instrumental of all time. It is a multi-movement song that builds, retreats, and builds again through about 9 movements, some of which repeat later to create a chorus feel. Another song that has not grown old, and still makes a grand appearance on most tours.

This album also sees Geddy's last really high-pitched, wailing vocals (except for a brief moment in "Freewill" on the next album), and seems to mark the end of an era for Rush, as they really turn from their epic numbers over the next two albums, before abandoning them altogether. Fortunately, they end that chapter with this incredible album.

If there is one drawback to this album, the cover art is a little goofy. But hey, it's prog rock, and they were having fun.

Brunerius I
4.0 out of 5 stars A great band at the peak of their powers.
Reviewed in the United States on June 10, 2017
Verified Purchase
My all-time favorite Rush album, in which they reached the pinnacle of their instrumental virtuosity, experimentalism, classical-inspired forms and self-proclaimed "self-indulgence."
Read more
Helpful
Report abuse

Jonathan Spahn
5.0 out of 5 stars A must have
Reviewed in the United States on April 29, 2018
Verified Purchase
One of Rush's many great albums. Everything comes together on this masterpiece; musicality, style, technical precision, and poetic verse, all show how synced this band was early on and why they are one of the greatest bands ever in rock.
Read more
Helpful
Report abuse

Amazon Customer
5.0 out of 5 stars Still an incredibly impressive recording
Reviewed in the United States on November 5, 2018
Verified Purchase
First owned this 40+ years ago when it was initially released. It is still as impressive and timeless today as it was then. Still blown away.
Read more
Helpful
Report abuse

Brian
5.0 out of 5 stars great music
Reviewed in the United States on July 28, 2017
Verified Purchase
Again , Rush does it again , had Rush alums when I was a teen and the music never gets old . Hey millennials its ok to listen to your parents music.
Read more
Helpful
Report abuse

Mike villarreal
5.0 out of 5 stars Forgot how good this cd was and is!
Reviewed in the United States on May 10, 2020
Verified Purchase
Classic
Read more
Helpful
Report abuse
See all reviews