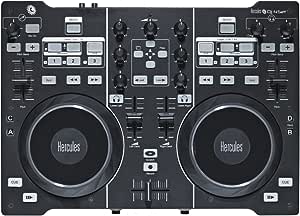 by Hercules DJ
4.0 out of 5 stars 25 ratings
| 9 answered questions
Currently unavailable.
We don't know when or if this item will be back in stock.
Show more

The Hercules DJ 4Set combines the functions and feel of a pro controller with the simplicity users need to host memorable parties all night long. This all-in-one mixing station for the serious DJ features a 2-4 deck controller to mix digital audio tracks, 2 stereo outputs to play the mix for the audience and preview next track, and 2 stereo inputs to include turntables, MP3 or CD players in your mix. It's large enough for comfortable mixing, compact enough for mobile use, and there's no need for a separate audio interface. The DJ 4Set is a must-have solution for mixing fans who dream of setting the dance floor on fire with their mixes, without having to spend days in advance getting to know their new gear. 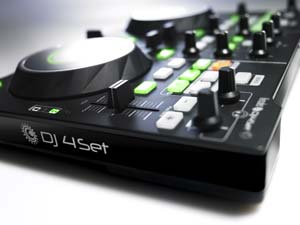 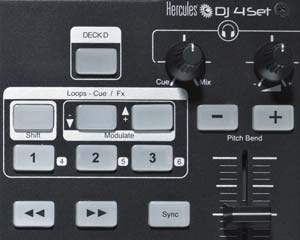 The two large 4.7" jog wheels feature weight sensors to detect the hand's weight on the jog wheel top, for fine adjustments during the mix. They're great for scratching and seeking within audio tracks. 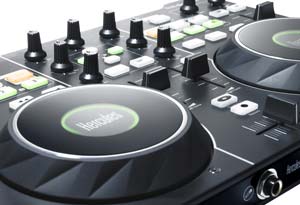 While the track plays, you control the DJ software with two actions on the jog wheel: rotation, to control movement within the track, or press down to control scratching. Thus, during audio track playback, you can pitch bend, scratch, and start or stop playback, just like using a real vinyl scratching turntable.

4-channel output gives you the flexibility of stereo line output for the mix, plus stereo headphone output for previewing tracks. A microphone input with talk-over function means there's no need to carry an audio interface.

2 deck controls plus 2 deck switches convert deck A into C, and deck B into D, letting you control 4 virtual decks. Deck switches convert all deck controls into another set of MIDI commands, plus mixer volume and EQ controls. Deck viewers light up the letter of the controlled deck, while the backlighting color of jog wheels changes to indicate which virtual deck is being controlled.

The DJ software included with the Hercules DJ 4Set suggests cue points in the audio file analysis, getting you mixing and producing quickly. Synchronize tracks using pitch encoders and/or sync buttons, and create automatic loops on 1, 2, 4 or 8 beats. Add effects to customize your music, then record your mixes as audio files.

4.0 out of 5 stars
4 out of 5
25 customer ratings
How does Amazon calculate star ratings?
Amazon calculates a product’s star ratings based on a machine learned model instead of a raw data average. The model takes into account factors including the age of a rating, whether the ratings are from verified purchasers, and factors that establish reviewer trustworthiness.
Top Reviews

Dustin
4.0 out of 5 stars I'm quite pleased with the purchase.
Reviewed in the United States on March 31, 2015
Verified Purchase
I love this unit. I bought this with the sole purpose of getting introduced to the DJing world and to explore new things. As such, the unit I bought was used in "like new" condition. There was/is a problem with the software drivers and Windows 7 (in my case) that do not allow me to use the microphone and headphone jacks on the unit itself. It's an easy enough workaround, but it's still pretty frustrating. Aside from that, it's a great piece to get started on to learn the basics. If you're more experienced in terms of DJing, you'll find that this unit is lacking a lot of features that you'd probably come to expect. I personally would like to see more options for controlling effects, a bigger play button, and a dial-knob for track selection instead of a button. Either way... minor things, great unit!
Read more
Helpful
Comment Report abuse

TRBG
5.0 out of 5 stars The Best entry-level/intermediate Controller
Reviewed in the United States on December 31, 2011
Verified Purchase
This controller is a winner. It has almost everything a newcomer to the DJing world needs. Intermediate DJs will find it great too.
I'll list the pros and cons of the controller,

1) 4 decks instead of 2 in all competitors.
2) Internal sound card to use your headphones to cue and your microphone to speak to your crowd.
3) a 3.5 m output sound plug to use for basic home speaker systems. (Didn't find this in Numark).
4) a really simple layout and large touch sensitive wheels.

1) there are no nubs to control the effects, instead there are buttons. (I prefere the nubs).
2) You gotta upgrade the software as it's really basic with not much effects.

Abbie
5.0 out of 5 stars hercules dj 4
Reviewed in the United States on November 13, 2012
Verified Purchase
i had the numark mix track and have used the pro,the hercules item way more fits my needs, a great product. mixing is much easier.
thanks for great products hercules.
Read more
One person found this helpful
Helpful
Comment Report abuse

Johnathan
5.0 out of 5 stars Nice beginner tool
Reviewed in the United States on February 24, 2013
Verified Purchase
I bought this to start dabbling in live mixing, and it was a nice addition to my equipment. I'm not really into mixing, but this is fun to play at parties. Don't do a legit venue with just this tho... you'll look like a kid. If you're trying to get into mixing, this is a nice tool to start with.
And remember that this has its own soundcard. So you will need an adapter to hook up with regular headphones unless you have RCA cords and an external soundcard
Read more
2 people found this helpful
Helpful
Comment Report abuse

this is the best game ever err
5.0 out of 5 stars Five Stars
Reviewed in the United States on January 12, 2015
Verified Purchase
Great
Read more
Helpful
Comment Report abuse

LucaBra
4.0 out of 5 stars Already worked 2 Graduation parties!
Reviewed in the United States on October 2, 2013
Verified Purchase
The board is fun and easy to operate, It does take some practice to become really good, I have new respect for DJ's!
Quality was good for the price and has some cool effects.
Read more
3 people found this helpful
Helpful
Comment Report abuse
See all reviews from the United States