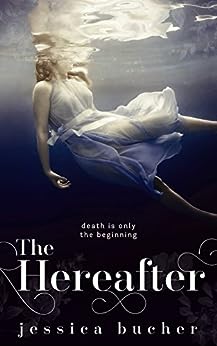 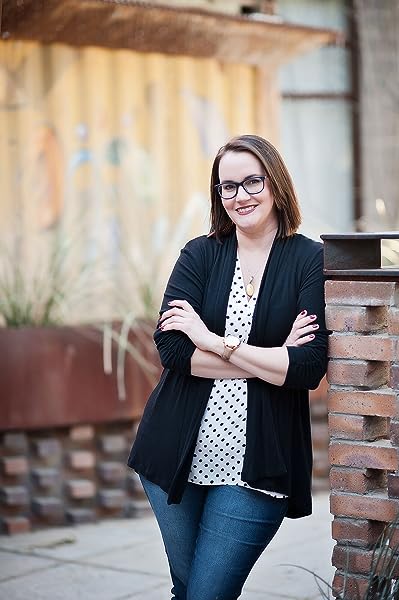 The Hereafter: a dark YA romance Kindle Edition

Jessica Bucher is long-time lover of stories about young love and characters who are larger-than-life. It's why she was swept off her feet by a soldier who stole her away to travel the world. Thirteen years later, they have two (almost three) children and more stamps in their passports than they can count. Seeing the world has inspired many stories and novels, though The Hereafter is Bucher's debut. She is a Creative Writing graduate, blogger, yoga teacher, music lover and member of the Ansbach Writers Group. --This text refers to the paperback edition.

Andrea C.
5.0 out of 5 stars 5 "where he ended, she began" stars!
Reviewed in the United States on December 13, 2016
Verified Purchase
"Perhaps this was how all love stories are. True love lies in some deeper past, some twist of fate, the dying need to be with the other, but also to fix them. To make everything right."

With a lyrical, delicate and totally impeccable style "The Hereafter" is one of the most genuine, clean and original books I have had the pleasure of reading. Jessica Bucher is a writer who has magic between her fingers, and at the time of writing she doesn't hesitate to convey that magic to her readers. I am in fact astonished that this is her first book, immediately after reading it, I thought "I NEED to read it again!"

"The barrier between them was now broken, and she no longer felt the desire to rush. They let their foreheads meet, each of them inhaling the closeness—an intimacy closer than kissing. She wound her arms around his neck as he squeezed her waist closer. The embrace whispered, finally. At the exact moment that the horizon swallowed the bright orb, their wet, salty lips found each other."

Nin and Dylan are in a place where they don't know if they are alive or dead.. but by fate or coincidence? They are together in this place. Lost between fuzzy memories and feelings of guilt both must discover in which points their lives as such intertwine, why they are in that place and learn that second chances are undoubtedly something that we all deserve.

These characters from the beginning convey the weight on their shoulders, the emotional load of their hearts and the consequences that different events of their life triggered and put them there.They have almost this vibe of old souls/vintage in them, they are too young to be in that place but at the same time their souls are old to understand what their young hearts still don't understand, does that make sense?!

I could clearly understand Nin's reasons for taking each step, pain and mourning do strange things in all people. Sometimes the desire to feel anything whatever, it drags us to the wrong places and it takes us away from the people we loved. In a certain instance, I believe that we are all at one time Nin, we are lonely and lost, trying to be something that someone wants us to be. Nin as it is a representation of a lost and confused person, it also represents what it is to have a noble, gentle and young heart.
And Dylan, Oh my heart! I can only say that he didn't deserve even an ounce of what he lived. This boy in spite of all the black things in his life deserved a second chance and a new beginning. It broke my heart to read every crack in his story, and I admire him because despite all the gray areas of his life he longed to be better, not only for Nin but for himself. That is really what love does for people, not only allows us to forgive but just as Nin, allows us to sacrifice even our happiness for those who truly love.
Love in this book shows the strength it has in all its splendor. Nin and Dylan are touching characters with a touch of reality, both mature the idea of ​​themselves, and understand that sometimes our souls are united beyond even space, time or death.

"When she wrapped herself around him, his will to stop was gone. When he pulled away, she pushed closer. When he slowed, she quickened. Where he ended, she began."

Jessica is like I said, a writer who has magic on her fingers. The writing is beyond amazing, lyrical and clean, but above all has a classic and elegant touch in it. The description of a touch or a kiss steals your breath and I am addicted to her words. To each of them!!!
I didn't want this book to end, but that was the perfect and proper ending for Dylan and Nin. "The Hereafter" is an exquisite read, filled with a young love, new begginings and beautiful words that Jessica Bucher brought to life.

"They were meant to find each other. Their lives collided so intensely that they were thrust into the same afterlife together."
Read more
3 people found this helpful
Helpful
Report abuse

T. Bianco
5.0 out of 5 stars Beautiful debut novel! Looking forward to more!
Reviewed in the United States on March 27, 2016
Verified Purchase
A beautiful and well written debut novel that came recommended by another author. I loved how this story was being told in both main character's POV, as well as in the present, and in the past. I'm not a paranormal reader but this aspect didn't throw me off at any time. Suffice you go in with an open mind. The story is written in a perfect and engaging pace that left me wondering what I would find on the next page or in the next chapter, and all the while asking myself how this would end... Without spoiling anything, I was surprised to see how the story came to and end. A beautiful and unexpected twist in the lives of Nin and Dylan.

I'd recommend this story to anyone and I'm looking forward to read more by this author!

Ashley Bailey
5.0 out of 5 stars It is beautifully written. The story really pulls you in and ...
Reviewed in the United States on July 20, 2016
Verified Purchase
I just finished reading this book for the second time. When friends ask me for book suggestions, lately I've been giving them the name of this book. It is beautifully written. The story really pulls you in and I found myself caring about Nin and Dylan very quickly. I love that we get to experience their present as well as see all the details that led them to where they are. The pages are filled with vivid writing. I love when a book lets me see the story in my head. It is a romance but not one you would expect. The surprises make me love it even more. If you're looking for a book that will tug at your heart, keep you in suspense, and insist you block everything out and read it....then this is the one for you.
Read more
One person found this helpful
Helpful
Report abuse

Amanda Richardson
5.0 out of 5 stars Such a heartwarming story...
Reviewed in the United States on March 21, 2016
Verified Purchase
I had the privilege of reading an earlier draft of this novel and I can safely say that Jessica is going places! This story has so many layers, and the ending unravels in such a beautiful way. I don't want to give anything away, but premise is totally unique and the writing is superb. I'm so excited to read more from this talented author!
Read more
One person found this helpful
Helpful
Report abuse

After you've finished reading and put this one away, you will find yourself thinking about the possibility of "what if". What if that could really happen?

cpdiane
5.0 out of 5 stars Nailed it!
Reviewed in the United States on June 19, 2016
Verified Purchase
Once you start, you can't put down. Very clever who could come up with this? Jess of course! Loved it Jessica Bucher, just loved it! Great story!
Read more
Helpful
Report abuse

Beltray
5.0 out of 5 stars Five Stars
Reviewed in the United States on January 1, 2018
Verified Purchase
Creative and true feelings throughout the book. Definitely worth reading at least twice!
Read more
Helpful
Report abuse
See all reviews
Back to top
Get to Know Us
Make Money with Us
Amazon Payment Products
Let Us Help You
EnglishChoose a language for shopping. United StatesChoose a country/region for shopping.
© 1996-2021, Amazon.com, Inc. or its affiliates