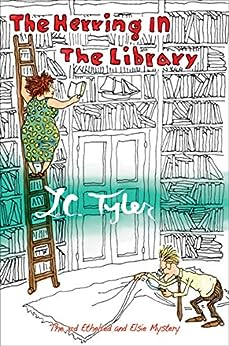 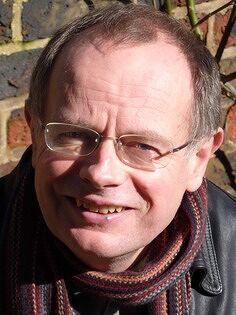 The Herring in the Library: Ethelred & Elsie #3 (The Ethelred and Elsie Mysteries) Kindle Edition

by L.C. Tyler (Author) Format: Kindle Edition
Book 3 of 9: The Ethelred and Elsie Mysteries
See all formats and editions
Sorry, there was a problem loading this page. Try again.
From the author of Ten Little Herrings, murder is on the menu when a two-bit British crime writer and his sub-par agent dine at a country estate.

Ethelred and Elsie are an unlikely duo: he’s a deeply mediocre mystery writer, and she’s his deeply nosy, chocolate-chomping agent. And yet they are stuck with one another, if only because their combined sleuthing abilities are much more impressive than anything either one of them can come up with alone. Tonight’s agenda: dinner with Ethelred’s pal “Shagger” Muntham and his titled wife. Elsie may not be overly fond of the Shag, but she wasn’t exactly hoping someone would murder him in the library of his own stately home. However, now that someone has done the dastardly deed, would it kill Ethelred to take a little interest, show a little Sherlockian spirit for once?

Praise for The Herring in the Library

L C Tyler is a crime writer and a past chair of the Crime Writers Association.

He grew up in Essex and studied at Southend High School, Jesus College Oxford and City University. During a career with the Civil Service and the British Council he lived in Hong Kong, Malaysia, Sudan, Thailand and Denmark. More recently he has been based in Islington and West Sussex. He is an honorary fellow of the Royal College of Paediatrics and Child Health, of which he was previously Chief Executive.

His first novel, the Herring Seller's Apprentice, was published in 2007. Subsequent novels in the "Herring Mysteries" series are Ten Little Herrings (2009),The Herring in the Library (2010), Herring on the Nile (2011), Crooked Herring (2014), Cat Among the Herrings (2016), Herring in the Smoke (2017), the Maltese Herring (2019) and Farewell My Herring (to be published 2021). Most of these have also been published or are scheduled for publication in the US. The first four have appeared in translation in France. Herring in the Library won the Goldsboro Last Laugh Award for the best comic crime novel of 2010 and Crooked Herring won the same award for 2014. The Herring Seller's Apprentice and Ten Little Herrings were both nominated for Edgar Allan Poe Awards in the US.

Outside these series, he has published one humorous (non-crime) novel A Very Persistent Illusion (2009) and contributed a chapter to two of the Detection Club's books: The Sinking Admiral (2016) and Howdunit (2020).

3.9 out of 5 stars
3.9 out of 5
65 global ratings
How are ratings calculated?
To calculate the overall star rating and percentage breakdown by star, we don’t use a simple average. Instead, our system considers things like how recent a review is and if the reviewer bought the item on Amazon. It also analyzes reviews to verify trustworthiness.
Top reviews

J
3.0 out of 5 stars Enjoyable, but not as good as the previous 2
Reviewed in the United States on January 26, 2014
Verified Purchase
I enjoy Ethelred & Elsie. The first two books in the series are very clever and well done. This third entry is the weakest of the three, but that doesn't mean there isn't anything to like about it.

The story takes its queue from locked room mysteries of yore - with Ethelred and Elsie opening the book playing a game of Cluedo. The book then alternates the unfolding of the story of how Shagger could have been murdered in a locked library across Ethelred's point of view, Elsie's point of view (always fun to read a telling of the same scenes from the very different perspective of Ethelred and Elsie), and passages of Ethelred's latest Master Thomas novel. The structure works and supports you getting to know the characters.

I felt the plot for this one was a little too transparent to be truly engaging. The previous novels, although also taking their queue from plots from days of yore, were still crafted to allow for a real whodunit. This one felt very superficial compared the the previous two books - there was really no guesswork at all on the reader's part to figure out what was going on very early on. However, it was a very quick read and still enjoyable to read the banter between Ethelred and Elsie as a break between more meaty book fare.
Read more
3 people found this helpful
Helpful
Report abuse

patricia gray
5.0 out of 5 stars So happy I ordered!
Reviewed in the United States on October 26, 2019
Verified Purchase
Loved it !! I had read books 1,2,and4 but was missing this one. great service and quick delivery!!
Read more
Helpful
Report abuse

Amazon Customer
5.0 out of 5 stars wonderful locked-room mystery
Reviewed in the United States on June 30, 2011
In Findon, West Sussex, England third level list mystery writer (under two aliases) and romance author under another name) Ethelred Tressider runs into university pal Sir Rob "Shagger" Muntham. After a brief chat, Shagger invites Ethelred and his agent Elsie Thirkettle to a dinner party at Muntham Court. They agree to attend the gala.

As soon as they arrive, Elise makes it clear to her client that they are to sit near the exit so they can gracefully leave. From the moment they step inside Shagger's young wife tense Annabelle outrageously flirts with Ethelred in front of everyone. However before they can flee into the night, someone strangles Shagger inside the locked library. Annabelle demands Ethelred investigate. Being chivalrous, he agrees but Elsie refuses to leave alone with the not so grieving widow and the snooty crowd he investigates.

The latest ET to the second power amateur sleuth (see The Herring Seller's Apprentice and Ten Little Herrings) is a wonderful locked-room mystery that has a throwback feel to the Agatha Christie country house whodunits (see Endless Night, And Then There Was None and Peril at End House) though in a contemporary time. The fun is the interplay between the perfect English gentleman and his in your face agent who insists if he worked diligently and applied his talent he could attain a level two. Readers will enjoy the antics of this pair has they investigate the murder of Sir Shagger.

Old lady
5.0 out of 5 stars This was a fabulous, amusing, subtle and tricky novel.
Reviewed in the United States on January 12, 2021
Verified Purchase
The author is quite clever, more than I, and I couldn’t stop reading the book. This is not your typical murder mystery, and all the better for it. It is a delight to read.
Read more
Helpful
Report abuse
See all reviews

Kindle Customer
3.0 out of 5 stars Starting to really dislike the characters
Reviewed in the United Kingdom on March 8, 2021
Verified Purchase
While the writing style and the two differing perspectives really make the story run, and the bumbling of the pair is charming as a series it's starting to fall apart. In the previous two books the main characters were funny. Now he has just turned into too much of a spineless moron and while she has always been dim and sarcastic it just isn't funny any more. And the end? One of the worst endings I've read in a while. If I hadn't of already bought the next book I would be getting now, all I can hope it's that it is better than this one.
Read more
Report abuse

Damaskcat
4.0 out of 5 stars Herring in the Library
Reviewed in the United Kingdom on August 25, 2015
Verified Purchase
Ethelred and Elsie are invited to dinner by an old university acquaintance of Ethelred's - Sir Robert Mundham. Their dinner companions seem an ill-assorted and ill at ease group of people and the pair are starting to wonder what is going to happen as it seems like an ideal set up for a murder and the house reminds them of the game of Cluedo they had been playing earlier in the day.

Half way through the meal the host makes a speech and disappears. He is found dead in his library shortly afterwards. Suicide or murder? That is the important question. Nearly everyone present had means motive and opportunity. Ethelred and Elsie - crime writer and agent - are immediately intrigued.

The story is told alternately by Ethelred and Elsie interspersed with chapters from Ethelred's historical novel which he is currently writing which somehow seems to be taking on aspects of the real life events he is involved in.

I found this an entertaining read with some nice twists and turns in the plot. I like the relationship between Elsie and Ethelred and the banter that goes on between them. The book is well written and if you like classic murder mysteries with a twist then you could try this series - they can be read in any order.
Read more
2 people found this helpful
Report abuse

A Girl in Touraine
5.0 out of 5 stars Charming humourous classic crime fiction
Reviewed in the United Kingdom on March 4, 2019
Verified Purchase
I love this series of tongue-in-cheek spoof novels - the real charm & humour is generated by the relationship between the main character & his slightly delusional but down-to-earth literary agent Elsie (pun on the author’s initials L C), each telling the story from their differing perspectives. Lovely classic gentle English humour, set in the picturesque Sussex countryside.
Read more
Report abuse

Mr. A.J. PENDLEBURY
4.0 out of 5 stars Maybe 3.75...!
Reviewed in the United Kingdom on June 6, 2021
Verified Purchase
Some good ,contrasting dialogue; I like the different chapter author idea although wasn't entirely convinced by the large chunks of the historical crime novel . There were some sparky vignettes amongst the supporting characters ,although the locked room part didn't really work very well for me. Much to enjoy ,but I do wonder if this sort of back and forth writing may begin to pall.
Read more
Report abuse

Garibaldi
5.0 out of 5 stars An excellent and very amusing read.
Reviewed in the United Kingdom on February 19, 2021
Verified Purchase
I am collecting books by this author. Mainly because he went to the same school as me in Southend, Essex. But also, because the series of stories based on the exploits of crime writer Ethelred and his manager Elsie are an excellent and very amusing read.
Read more
Report abuse
See all reviews