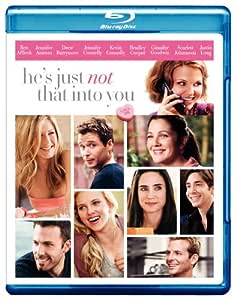 He's Just Not That Into You [Blu-ray]

Remember that really cute guy who said he'd call....and didn't? Maybe He's Just Not That Into You. An all-star cast - Ben Affleck, Jennifer Aniston, Drew Barrymore, Jennifer Connelly, Kevin Connolly, Bradley Cooper, Ginnifer Goodwin, Scarlett Johansson and Justin Long - looks for love and finds laughs in this savvy, sexy, right-now romcom. Based on the runaway (like some guys you know) bestseller by Sex and the City series writers Greg Behrendt and Liz Tuccillo, He's Just Not That Into You sparkles with zingy aha moments any survivor of the dating wars will recognize. See it with someone you'd like to love.

Based on the bestseller by two Sex and the City scribes, He's Just Not That Into You confirms that the HBO series was more than just a television show--it was a cultural institution that spawned tours, catchphrases, fashion trends, and more. Ironically, the resulting film is both smarter and funnier than the big-screen version of Carrie and the gang. Of the nine central characters, the sweet, if clueless Gigi (Big Love's Ginnifer Goodwin) makes the most vivid impression. The Maryland career girl tends to fall for friendly guys, like Conor (Entourage's Kevin Connolly), who are "just not that into" her. At a local watering hole, she meets bar manager Alex (Justin Long, Goodwin's Ed co-star), who sets her straight about the difference between what men say and what they mean, adding that there are exceptions to every rule. Her seemingly settled co-workers, Beth (Jennifer Aniston) and Janine (Jennifer Connelly), have relationship issues of their own: Beth's boyfriend of seven years, Neil (Ben Affleck), doesn't believe in marriage, and Janine's husband, Ben (Bradley Cooper), has a wandering eye... for singer/yoga instructor Anna (Scarlett Johansson). Alt-weekly ad saleswoman Mary (executive producer Drew Barrymore) provides the link between this loose-knit community. An avid Internet dater and full-time technophile, she bemoans the fact that "people don't meet each other organically anymore." At 132 minutes, Ken Kwapis's movie could use a few trims, but he brings these complicated romantic entanglements to a convincing conclusion and the confessions from random passers-by add to the laughs. --Kathleen C. Fennessy

4.6 out of 5 stars
4.6 out of 5
2,363 global ratings
How are ratings calculated?
To calculate the overall star rating and percentage breakdown by star, we don’t use a simple average. Instead, our system considers things like how recent a review is and if the reviewer bought the item on Amazon. It also analyzes reviews to verify trustworthiness.

Melanie Rios
5.0 out of 5 stars omgggg
Reviewed in the United States on February 10, 2017
Verified Purchase
This was my favorite movie ever! Perfect movie for that annoying best friend of yours that thinks some guy is sending her mixed signals and likes her when he clearly doesn't! Seriously I'm not even kidding, make her watch this movie and without a doubt she will finally get it through her head, "he's just not that into you!!!"
Read more
16 people found this helpful
Helpful
Comment Report abuse

Venni73
5.0 out of 5 stars Stop obssessing....
Reviewed in the United States on December 21, 2016
Verified Purchase
I watch it every time I start obsessing about some guy who I feel may be doing me wrong or when I delude myself in that he may be ignoring me. So watched it 5 times this year alone. Sometimes, I am not into someone as well. But I never think of others, do i?
Read more
16 people found this helpful
Helpful
Comment Report abuse

Jonathan Hansen
5.0 out of 5 stars Humorous Pathos
Reviewed in the United States on February 18, 2015
Verified Purchase
I've had a crush on Jennifer Connelly since I saw her in the Labyrinth. The mature version is still appealing. The pleasant surprise is how realistic the experiences of these fictional characters are analogous with every-day life. Then there were the pop-up interviews and side line (friendship) psycho-analysis, where the daily associates basically eviscerate any pretensions that our heroines might be clinging to. (Like playing phone tag, and voice-mail tag, and e-mail tag, and texting, and my-spacing and only to get rejected by all these different technologies!)

It's absolutely glorious to watch a non-religious comedic romance drama that etches out the premise (and sticks to it), that workable conjugal relationship always depends on putting the beloved other ahead of our own selfish impulses. Not to mention highlighting the chaotic norm that what we most yearn for and need, usually isn't on the greener, grassier, other side of the fence, but inexplicably, directly in front of us.

Jonty
5.0 out of 5 stars Great Movie... Realistically Funny and Romantic... Great Acting...
Reviewed in the United States on December 29, 2016
Verified Purchase
Hi, I really liked this movie. Not at all what I expected. I didn't watch the movie years ago when it came out because I did not like the author of the book ''He's Just Not That Into You". The author came off as so cocky and arrogant on all of his tv interviews... But the movie is great, give it a try. I found it to be funny and realistically romantic. Great for both men and women, I watched it three times and I am considering buying it.
Read more
8 people found this helpful
Helpful
Comment Report abuse

Pumpkin48
5.0 out of 5 stars Dating from the male’s point of view
Reviewed in the United States on June 19, 2018
Verified Purchase
Funny and relatable to the dating scene. How females misinterpreted guys cues and more. Enjoyable and has a happy ending. I really like it and highly recommend. Probably more a chick fiix.
Read more
4 people found this helpful
Helpful
Comment Report abuse

Victoria
5.0 out of 5 stars I Love It!!
Reviewed in the United States on November 26, 2015
Verified Purchase
Probably one of the best chick flicks I've seen. By that I mean that it's up there with Legally Blond! Yeah, that's how horribly good it is. I mean, yeah it's a bad movie, but it's tasteful. I usually think that movies that show different stories of people at the same time are a mess, this one does pretty well with integrating all the characters together one way or another. I highly recommend!!
Read more
3 people found this helpful
Helpful
Comment Report abuse

NSU demon
5.0 out of 5 stars Cute movie
Reviewed in the United States on July 3, 2019
Verified Purchase
It's a good movie for a date when you're really interested in the person. If you're "Not that into them", perhaps it's not the best unless you want to send them that message. If your date is neurotic, overthinks, and jumps to conclusions, also probably not a good movie for them. Great cast. Loved it.
Read more
Helpful
Comment Report abuse

Stacie Carlson
4.0 out of 5 stars Great relationship movie
Reviewed in the United States on December 22, 2012
Verified Purchase
This movie is great for anyone who is considering dating and/or a relationship, is dating or in a relationship, or is wondering if they have a good relationship or should they get out of it. The movie demonstrates (very well) many different types of relationships, both good and bad, and gives us some insight into what we might be doing wrong, or where we need to draw boundaries. Also, pay attention to the in between scenes in the movie, where they cut away to people who are not in the movie -- those scenes are hilarious, but oh so true! I suggest following up with the book. It has a lot of little quips in it that really open your eyes to what's really going on. Save yourself the heartbreak and/or embarassment, and move on until you find the one who treats you well! In the meantime, keep both feet on the ground, and remember that you do matter and your feelings matter!
Read more
5 people found this helpful
Helpful
Comment Report abuse
See all reviews

Mr. J. A. Bentley
4.0 out of 5 stars Ginnifer Goodwin's Rom Com.
Reviewed in the United Kingdom on November 4, 2019
Verified Purchase
It's just as well the cast list was so impressive otherwise I could not have held out to the end, the antics of Ginnifer Goodwin holds this film together but the parts played by Ben Affleck and Jennifer Aniston fade into the background compared with Ginnifers performance.
Read more
Report abuse

Stacey Bennett
5.0 out of 5 stars "My god it all makes sense now!" the movie full of revelations
Reviewed in the United Kingdom on April 12, 2013
Verified Purchase
Ladies this is more than a delicious rom-com... it's a survival guide! From smoldering affairs that soon go sour to the long-term partner who just won't commit whatever you're going through or have gone through there will be something in this movie that you recognise, that is familiar to your own experiences and relationships. For me it was Jennifer Aniston's turmoil for you it could be Drew Barrymore's but for us all this is relatable and lovely! Get the Ben and Jerry's out and call your bestest girlfriend you're gonna want them!
Read more
One person found this helpful
Report abuse

marek
4.0 out of 5 stars i was quite into this movie
Reviewed in the United Kingdom on August 24, 2018
Verified Purchase
quite enjoyed this movie , good cast and very amusing-centering around the confusion and mixed signals surrounding relationships-well worth a viewing
Read more
Report abuse

Charlotte's The Name- Honesty's the game
5.0 out of 5 stars A woman's must have
Reviewed in the United Kingdom on December 4, 2015
Verified Purchase
Who doesn't love a good chic flick? Come on fellas, you too, don't be shy! This is a really great film and an even better present. Listen up lads, buy this for your lady friend and tell her "you are the exception". Then you'll be out of the doghouse for sure.
Read more
One person found this helpful
Report abuse

Amazonian
4.0 out of 5 stars Big thumbs up!
Reviewed in the United Kingdom on April 23, 2016
Verified Purchase
Perfect for any girl out there who wants a bit of perspective on her love life. I know, it's only a movie, I'm not stupid, but it's just a good representation of the struggles of relationships (when to compromise, when not to, and a big reminder that things aren't always easy). PLUS, it's got some great acting, some good comedy and some well rounded characters.
Read more
Report abuse
See all reviews