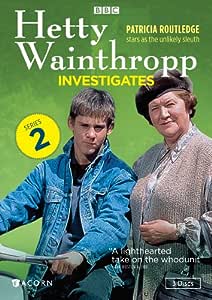 “A lighthearted take on the whodunit” —The Boston Globe

Acclaimed actress Patricia Routledge (Keeping Up Appearances) brings her genius for wry comedy and warmhearted drama to the starring role as a housewife turned detective in this popular series.

The Wainthropp Detective Agency builds on earlier successes as Hetty, her husband, Robert (Derek Benfield, Rumpole of the Bailey), and teenaged sidekick, Geoffrey (Dominic Monaghan, Lost, The Lord of the Rings trilogy), grow in expertise and confidence. In these six further adventures, they come face-to-face with murderers, saboteurs, and charlatans of all types, while never shrinking from danger or losing their moxie.

Includes two episodes not seen on the PBS Mystery! broadcast

Jack E. Levic
3.0 out of 5 stars SLOW PACED BUT ENJOYABLE FUN
Reviewed in the United States on August 3, 2011
Verified Purchase
I'm a fan of Patricia Routledge from her days as Hyacinth Bucket on KEEPING UP APPEARANCES. I knew she had a knack for comedy so I wanted to see her in a drama. I was eager to see HETTY WAINTHROPP INVESTIGATES. The Complete Second Series was inexpensive so I started with that series. No doubt Series One would explain why the teenage Geoffrey Shawcross is living with Hetty and her husband Robert and how Hetty got so well-known as a private investigator.

The first two episodes of Series 2 were POISON PEN and LOST CHORDS were painstakingly slow moving and dull. In POISON PEN, people in a small village are getting very nasty anonymous letters and in LOST CHORDS, finalists in a singing competition are mysteriously losing their voices. Not very exciting stuff. Production values at times seemed low. It felt like a very low budget TV production.

The good news is things picked up with the third episode NOT ALL THERE. A man and woman with learning disabilities have run off together for holiday and they end up in a lonely cottage with a big secret. The episode was tastefully down and treated the two people with dignity and respect. Now my interest was caught. Here was a story that was fresh and different

ASTRAL PLANE allows Hetty to investigate a psychic? Is she for real or just eating up the savings of lonely pensioners. In A ROSE BY ANY OTHER NAME, is the mysterious photographer of mature women out for their fortunes? Finally in episode 6, Hetty investigates the death of a woman who had been living in a home for abused women.

For the most part the stories are very basic and the writing is inspired. Hetty is no Miss Marple but is fun to watch Hetty investigating investigating what may or may not be a crime. It's hard not to think of Hetty as a toned-down Hyacinth Bucket in her best dresses, capes and hat.

The real charm here is the relationship between Hetty and Geoffrey played by a teenage Dominic Monaghan (LORD OF THE RINGS and LOST). The talent in this young actor is very clear and he follows his role with fun and enthusiasm. Geoffrey has great facial features and he learns to be a detective--an idispensable aid to Hetty.
Hetty's husband Robert helps as rather inept investigator. His role seems unnecessary. It's the Hetty and Geoffrey team that has all the charm.

This is a very mild, light-hearted detective series. No violent crimes. Nothing Graphic. Just a few mysteries that need to be solved. Hetty's rates are down right bargain basement. She's doing this work for fun and to help people. Not a bad cause.

I enjoyed a few of these episodes of Series Two but won't rush out to see the other years' episode. It wasn't exciting entertainment but the series is pleasant. It's always nice to get to see the beautiful English countryside and villages.

K. Athon
4.0 out of 5 stars Cozy mysteries typical of BBC.
Reviewed in the United States on March 12, 2018
Verified Purchase
The star, Patricia Routledge, in her youth, was the Carol Burnett of England; she even had a show on Broadway, but she never gained a foothold in America. To the extent that the U.S. knows her, it is through her sitcom "Keeping Up Appearances," as rebroadcast on PBS stations. This series shows her dramatic side. I give this four stars instead of five, because the plots are a little too cozy (read, "unexciting") for me.
Read more
One person found this helpful
Helpful
Report abuse

Dianne Foster
4.0 out of 5 stars Gotta love Hetty.....
Reviewed in the United States on October 13, 2005
Verified Purchase
HETTY WAINTHROP - Series 2 features the talents of Patricia Routledge playing a woman billed as `The BBC's most unlikely sleuth." Yet, watching these episodes again, I realized Hetty fills a void or market niche for sleuths, making her not all that unlikely. The kinds of cases she investigates (mostly domestic) would have been dismissed by Holmes, and considered an unworthy challenge by Poirot, but with Miss Marple out of the picture, someone has to do them. On almost every occasion, the DCI, when asked, tells Hetty, the police can not help the victim or potential victim until a crime has been committed. Thus, many of the cases involve unpleasant experiences that are not necessarily criminal...YET.

Who would you turn to if someone was sullying your name with poison pen letters? Miss Marple handled a case involving poison pen letters, and other detectives like Barnaby have handled similar problems, but usually, the letter is a blackmail letter and the person involved becomes a murder victim. The letter(s) is usually typed on a typewriter with a funny key.(Computer software can be traced too, as we discovered in last year's presidential election campaign). Hetty doesn't handle murder cases. Or does she? How did the young woman staying at a shelter end up dead when her husband found her? And, who revealed her whereabouts? How can Hetty. having been named woman of the year, show up at the dinner honoring her, and explain the bruises dished out by her perhaps not so affectionate husband Robert?

Whether the client is the intended victim of a `Rose by another name', the father of a runaway teenager, or the daughter of a woman entranced by a medium, Hetty and her sidekick Jeffrey, to say nothing of husband Robert, and brother-in-law Frank, will solve the case.

These mysteries are not complex, they are cosy. I love Hetty and I wish PBS would air all the episodes the BBC made.
Read more
15 people found this helpful
Helpful
Report abuse

BarClay
4.0 out of 5 stars Delightful
Reviewed in the United States on March 11, 2016
Verified Purchase
My wife likes Hetty, and so do I. The writers of the show do a good job of providing her with just the kind of cases a Private Detective like Hetty might actually get. Occasionally, a show will end -- unexpectedly. I rather like criminals to be prosecuted, and every now and then in this collection, they are let off easily. That being said, several of these shows are excellent and gripping, as when Hetty investigates a medium or attempts to discover who has revealed the location of a battered women's shelter to one of the husbands. There are few car chases and even fewer fist fights, but these shows are a delight.
Read more
2 people found this helpful
Helpful
Report abuse

G. Jantzen
5.0 out of 5 stars Great product at a great price.
Reviewed in the United States on December 10, 2019
Verified Purchase
I'd forgotten what a great show this is! Not for everyone, I guess, as there's not a lot of "action". And, being from the UK, has more appeal to me. It's a story of an ordinary older woman who decides go into the 'detective' business and does very well. Discs were in perfect condition. Thanks!
Read more
Helpful
Report abuse

Jeanne
3.0 out of 5 stars Cheated out of 2 episodes.
Reviewed in the United States on August 21, 2020
Verified Purchase
Complete 2nd Series: Volume 2 Disc 2 Episode Astral Plane will not play. It keeps bouncing to episode in front of it.

Volume 3 Disc 3 Episode Woman Of The Year will not play. It keeps bouncing to episode in front of it.
Read more
Helpful
Report abuse

CherylTegan
5.0 out of 5 stars Nice mystery
Reviewed in the United States on May 31, 2017
Verified Purchase
This was such a great season. Patricia Routledge is confident and holds her own, quite take-charge, which subtly reminds me of Hyacinth. Except instead of humor we have mystery. Some very touching moments in some of the episodes where Patricia's acting really digs deeper. Love it!
Read more
Helpful
Report abuse
See all reviews

Janice M.
5.0 out of 5 stars Hetty Wainthropp Investigates: The Complete Second Series
Reviewed in the United Kingdom on February 23, 2010
Verified Purchase
I greatly enjoy watching Patricia Routledge in "Keeping Up Appearances" on our Public Broadcasting System. I received the first series of Hetty Wainthropp as a gift and enjoyed seeing Patricia Routledge as a very different character. I tried to purchase all the remaining series from Amazon UK, but could only get the second series for Region one. I like to watch many of the BBC programs, but "Appearances" has always been one of my favorites. I highly reccommend Hetty Wainthropp to anyone who enjoys mysteries.
Read more
One person found this helpful
Report abuse