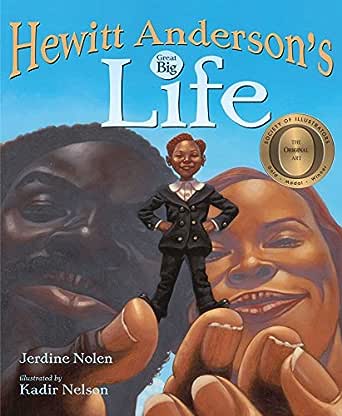 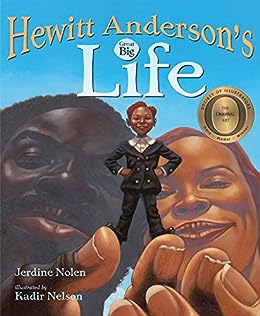 Jerdine Nolen is the beloved author of many award-winning books, including Big Jabe; Thunder Rose, a Coretta Scott King Illlustrator Honor Book; and Hewitt Anderson’s Great Big Life, a Bank Street Best Book of the Year, all illustrated by Kadir Nelson. She is also the author of Eliza’s Freedom Road, illustrated by Shadra Strickland, which was an ALA/YALSA Best Fiction Nominee for Young Adults; Raising Dragons, illustrated by Elise Primavera, which received the Christopher Award; and Harvey Potter’s Balloon Farm, illustrated by Mark Buehner, which was made into a movie by the same name. Her other books include Calico Girl, a Kirkus Reviews Best Book of the Year, and Irene’s Wish, illustrated by A.G. Ford, which Kirkus Reviews called “delightful and memorable” in a starred review. Ms. Nolen is an educator and lives in Ellicott City, Maryland.

Kadir Nelson is an award-winning American artist whose works have been exhibited in major national and international publications, institutions, art galleries, and museums. Nelson is the illustrator of many beloved, award-winning, and bestselling picture books including, We Are the Ship: The Story of Negro League Baseball, winner of the Coretta Scott King and Robert F. Sibert Award; Thunder Rose, written by Jerdine Nolen, which received a Coretta Scott King Illustrator Honor Award; Ellington Was Not a Street, written by Ntozake Shange, which received a Coretta Scott King Illustrator Award; Hewitt Anderson’s Great Big Life, written by Jerdine Nolen, which won the 2005 Society of Illustrators Gold Medal; and Mama Miti: Wangari Maathai and the Trees of Kenya by Donna Jo Napoli called “stunning” by Kirkus Reviews in a starred review. He is also the illustrator of Deloris Jordan and Roslyn M. Jordan’s Salt in His Shoes and Spike Lee and Tonya Lewis Lee’s Please, Baby, Please and Please, Puppy, Please. Kadir Nelson lives in Los Angeles.

Kindergarten-Grade 3–Hewitt Anderson is a normal-sized boy born into a family of giants who firmly believe that bigger is better. At the age of seven, their son is so tiny that his anxious parents consult doctors and specialists from all over the world. When none of them can explain "the circumstances surrounding Hewitt's small and unimposing stature," the loving parents formulate some lessons in survival for the boy. However, it is the little guy himself who ends up helping them survive the lessons. They are constantly amazed at Hewitt's resourcefulness and talents and finally realize that rather than worrying so much about his size, they should recognize that he is perfect just the way he is–something that the youngster already knows. Nelson's funny, larger-than-life oil paintings warmly depict this African-American family and give readers a real sense of gigantic proportions. They are visions of contrasts in size. On one page Hewitt stands on the mantle looking at family photographs. He is half the size of the smallest frame. In other pictures, he is curled up fast asleep in the center of his father's hand, or riding on the brim of his mother's bonnet. Told in colorful language that begs to be read aloud, this humorous, oversize book offers a gentle look at accepting others as they are.–Mary N. Oluonye, Shaker Heights Public Library, OH
Copyright © Reed Business Information, a division of Reed Elsevier Inc. All rights reserved. --This text refers to an alternate kindle_edition edition.

Low on suspense but high on sheer feel-goodness, this Tom Thumb-like original tale will elicit sighs of content from readers and listeners needing a change of pace. Born to adoring, humongous parents, tiny Hewitt sometimes does get lost in his immense bed, or have to dive between the floorboards to avoid a passing broom. Still, not only do the good times far outnumber the chancy ones, but his size comes in downright handy when, for instance, his father carries him up a towering beanstalk, then turns out to be afraid of heights, or his parents lock themselves in the treasure house. Nelson's burly, monumental, brown-skinned giants positively glow with beneficence, and Nolen writes, as always, with a distinctive mix of humor and formality: Listening to his parents sing "made Hewitt's liver quiver and tickled his funny bone right down to his shoes." Here's proof that, when it comes to heart, physical size isn't the whole story. (Picture book. 6-8) (Kirkus Reviews) --This text refers to an alternate kindle_edition edition.
Read more