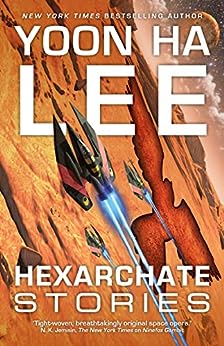 Yoon Ha Lee's novel Ninefox Gambit came out from Solaris in 2016 and quickly garnered massive critical acclaim and was short-listed for the Arthur C. Clarke, Hugo and Nebula Awards. It won the Best First Novel Award in the Locus Awards and the Reddit Fantasy Award. His story collection Conservation of Shadows was released by Prime Books in 2013. He lives in Louisiana with his family and an extremely lazy cat, and has not yet been eaten by gators. --This text refers to the paperback edition.

BooksnDraxx
4.0 out of 5 stars Machineries of Empire fans rejoice!
Reviewed in the United States on June 30, 2019
Verified Purchase
Yoon Ha Lee gives us some additional content to chew on from his critically acclaimed Machineries of Empire series. This collection is meant to be enjoyed after the original trilogy and I would discourage fellow readers from using it as an entry point into Lee's work. There are 21 separate pieces represented here, ranging from a handful of paragraphs describing Shuos cadets squirrel-fishing to an 100+ page post-Revenant Gun conclusion titled 'Glass Cannon.' The latter provides a fantastic, satisfying ending as well as a potential jumping off point for future works. Additionally I quite enjoyed the 'Author's Notes' following each work. Lee's musings, justifications, and writing exercises somehow endeared me to the series and author more than I already was. There is much to love here and I would definitely recommend reading it if you are already invested in the adventures of Shuos Jedao and Ajewen Cheris. 4.1/5
Read more
6 people found this helpful
Helpful
Report abuse

Amazon Customer
3.0 out of 5 stars Some good, some great, some meh
Reviewed in the United States on July 17, 2019
Verified Purchase
My only real complaint about this collection is that many of the short stories aren't even what I'd consider stories. Rather, I'd call them "glimpses", as they're like two or three pages and don't actually have a narrative at all, instead just providing a look at an important moment in a character's life. Some of these are interesting, most are boring. The final story here, however, is worth the price of entry all by itself. Wanna know what happens after the trilogy ends? Look no further.
Read more
Helpful
Report abuse

Margaret A. Davis
5.0 out of 5 stars Cheris plus many other Kel /Hexarchate tales!
Reviewed in the United States on July 13, 2021
Verified Purchase
I was pleased to find that Hexarchate Stories contains a final Machineries Of Empire novella. At the end of Revenant Gun, Cheris had gone back to her mother's people and tried to live a quiet life as a teacher.

Cheris being Cheris, of course, quiet and under the radar can become boring.

Elaina Martineau
4.0 out of 5 stars Mixed but good bag
Reviewed in the United States on October 27, 2020
Verified Purchase
I loved the Machineries of Empire series, and I appreciate the chance to see more of their world. However, many stories in this anthology are extremely short - just a few pages - and it's difficult to get invested in such a short time. Although it's cool to see the characters at different stages in their lives, it's been a while since I read the novels, and I wasn't familiar enough with the characters to really enjoy the glimpses into their backstories. However, the last story is relatively long, and I really enjoyed it.
Read more
Helpful
Report abuse

JohnD
4.0 out of 5 stars The "other" Machineries of Empire stories
Reviewed in the United States on March 29, 2020
Verified Purchase
If you've read Lee's Machineries of Empire trilogy (Ninefox Gambit, Raven Stratagem, and Revenant Gun), then you know what a wonderful writer he is and these stories provide some background to the central character of the trilogy.

If you haven't read Lee's work, this is a great introduction.

My only complaint is that there wasn't more to read.
Read more
Helpful
Report abuse

Bluemoon
4.0 out of 5 stars Bits & Pieces
Reviewed in the United States on August 9, 2019
Verified Purchase
Yoon Ha Lee is currently one of my favorite sci-fi authors, his work as inventive as that of any others working today. I enjoyed this collection, but much of the contents is brief sketches of what Lee may be intending on expanding in future. I didn't appreciate that format as much as the structure of his other works, otherwise I would have given this book five stars.
Read more
Helpful
Report abuse

ACZ
5.0 out of 5 stars Fantastic expansion to the MoE universe
Reviewed in the United States on April 28, 2021
Verified Purchase
Tells a lot of great backstory, and expands on/finishes some things from the original trilogy. I couldn't get enough of the original so I appreciated this, even as a collection of shorter stories.
Read more
Helpful
Report abuse

Kindle Customer
5.0 out of 5 stars Wonderful short story collection!
Reviewed in the United States on July 11, 2019
Verified Purchase
I really enjoyed this collection of stories set in the Machineries of Empire universe (and I loved seeing more of Jedao and Cheris)! The stories included are beautiful and wonderfully wrought, even when they're also devastating.
Read more
Helpful
Report abuse
See all reviews

Alyssia Cooke
3.0 out of 5 stars Lots of flash fiction
Reviewed in the United Kingdom on April 21, 2021
Verified Purchase
And I can consider one series well and truly finished! Hexarchate Stories is a compilation that includes one full length novella, a couple of shorts and a lot of flash fiction. Although many of the stories are prequels, I don't recommend reading this until after you've finished the main series. A lot of these give additional background or are slice of life snippets to existing characters, and if you haven't read the main series you are going to be lost.

I think out of the stories, I far preferred the longer entries and particularly those that focused on existing characters. Whilst some of the flash fiction was engaging enough, it isn't a form of fiction that I really enjoy. I liked how the collection was chronological, so it felt like you were on a fast forward through the timeline. I think The Battle of Candle Arc and Glass Canon are the strongest longer entries in the collection, offering both a prequel and a sequel to the main series in a way as well. I'd have liked there to be more full shorts here rather than the bulk of the collection being flash fiction, and there were a couple of entries that would have done well in a slightly expanded format.

I would also have really liked to see a full novella on the heresy game and the cover up of Ruo's suicide; a lot was made of this event in Jedao's past in the main series and I was quite disappointed that Yoon Ha Lee didn't take the opportunity to fully realise it one way or another. I did like the mix of bitter sweet, fluff and trauma that is depicted through the various pieces in this collection; it shows multiple sides to the series and allowed for some more humourous scenes to be shown.

All in all, a solid collection of works although it's a pity that so much of it is flash fiction. Personally, I'd have preferred the collection to be made up of slightly longer works and punctuated by a handful of flash. That may just be personal preference though.
Read more
Report abuse

Hal5000
5.0 out of 5 stars Satisfying Continuation
Reviewed in the United Kingdom on November 2, 2019
Verified Purchase
At first I was disappointed with this book - the early chapters struck me as slight and whimsical.
However the second half of the work is a much more meaty and involving continuation of the series, full of rapid developments and perilous predicaments.
The quiet humour continues, and there are additional insights into the histories of Jedda o, Cheris and other characters, as well as the features of the universe they inhabit.
The end of the story leaves plenty of scope for further galaxy-shaking emprises.
Please read Ninefox Gambit and other preceding volumes in the series in order to make sense of this book.
Read more
Report abuse

M. Harju
5.0 out of 5 stars No Kel jokes :(
Reviewed in the United Kingdom on September 17, 2020
Verified Purchase
V. Disappointed there was no chapter if Kel jokes

Really an amazing collection of stories; beautiful short snippets and wonderfully evocative words. And, some wonderful smut, too.

SJG
2.0 out of 5 stars Not a full length novel
Reviewed in the United Kingdom on July 12, 2019
Verified Purchase
I thought this was going to be a full novel, not a collection of story fragments.
Read more
Report abuse