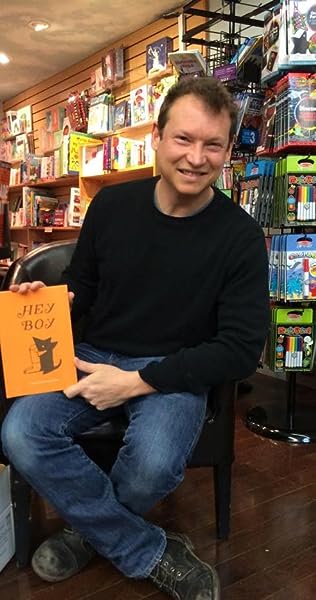 "Share, Big Bear, Share!" by Maureen Wright
Whimsical illustrations highlight the humor in this gentle story about the importance of sharing something special with friends. | Learn more
click to open popover

PreS-Gr 2—A true bond will last even when individuals are separated for long periods of time. Such is the case with the unnamed boy and dog in this touching picture book. When the boy adopts the pup, they dream of all the adventures they will have together. Sadly, an accident prevents this, and the boy has to give up the dog until he has "grown up." He stays in touch with his friend's adoptive owners and visits when he can. Time passes, then more, and just when readers think there is no hope, the boy and the dog's dreams come true. Strouse's plainspoken narrative will choke readers up a bit as the boy matures and the dog grows older. Any reader who has had a pet will reflect on the time that they have lost. That being said, neither character dwells on what could have been, so the ending has an air of contentment. In conjunction with the text, the infographic-like designs are quite poignant; children's hearts will ache to see the little black puppy staring forlornly from behind bars. Most pages feature little other than the characters and a few objects on a white background. However, for emotional beats, color and background expand to fill the page in order to better influence the tone. VERDICT Readers will find a fair amount of emotional depth in this story about the bond between man and dog. Probably best shared one-on-one, with a box of tissues nearby.—Rachel Forbes, Oakville Public Library, Ont.

"The messages of patience, love, and loyalty continue to the end....Like a new old friend, it's sure to be a book worth revisiting." -- New York Times Book Review, June 18, 2017

* "Strouse and Phelan perfectly complement each other in this meditation on the passage of time...The two channel Shel Silverstein's The Giving Tree....Luminous." -- Kirkus Reviews - starred review, March 2017

"A bittersweet story of love and loss, reconciliation and aging." -- Booklist, April 1, 2017

Benjamin Strouse, who grew up in New York City, found his first dog, Ralph, in Anchorage, Alaska. Benjamin has worked as a lawyer, producer, and musical theater composer, and lives in Maplewood, New Jersey, where he takes his current dog, Phil, his wife, and twin boys on as many adventures as possible. For more about Ben visit BenjaminStrouse.com.

Jennifer Phelan is an acclaimed illustrator with published works in American Illustration and 3x3. Her first children’s book, Hey, Boy, published by Simon & Schuster Books for Young Readers, was a New York Times Best Illustrated Children’s Book of 2017. She lives in Toronto. Learn more at J-Phelan.com.

Start reading Hey, Boy on your Kindle in under a minute.

Pat Burke
5.0 out of 5 stars Five Stars
Reviewed in the United States on May 24, 2018
Verified Purchase
Perfect for a boy and his dog.
Read more
Helpful
Comment Report abuse

lilyholic
2.0 out of 5 stars Confusing storyline
Reviewed in the United States on February 21, 2018
Verified Purchase
This book has some confusing issues... like how a boy continued to keep visiting and visiting a dog someone else adopted as he grew up into a much older boy. It isn't something our family would do-- adopt a dog, give it to the shelter, and then have our kid visit the dog someone else adopted. It doesn't make sense to me. I wanted to send it back, but it has nice illustrations and ultimately the message of loving rescue dogs and older animals is appealing.
Read more
2 people found this helpful
Helpful
Comment Report abuse

Tasha Saecker
4.0 out of 5 stars Pet Lovers Rejoice
Reviewed in the United States on July 3, 2017
A boy finds a dog and takes him home. The two of them love playing together, but then the boy gets hurt. The dog is taken to an animal shelter and someone else adopts him. The boy is told that he simply isn’t old enough yet to care for a dog. Happily, the boy still gets to visit the dog and tries to grow up fast enough to take him back. As time passes, the boy grows up and the dog ages. When the dog is finally too much for his adoptive family, the boy is given the chance to take him. This book is an allegory for the love of pets and the unbreakable bonds they forge.

Strouse writes in prose that is simple and straight forward. Yet the story is much more of a fable, one that doesn’t follow logic but emotion instead. The story is about the bond between human and animal, one that defies time and distance to keep connections fresh and strong. Strouse embraces this even as he tells it in his simple prose, hinting at the true depths of emotion that lie beneath.

Phelan’s illustrations make this book sing. From the dogs in the shelter that are striped with bars to the way the black dog is such a strong graphic on the page, her images are iconic and beautiful. They match the simple prose with their own profound simplicity, allowing the white space on the page to speak too.

Strong illustrations make this allegory all the better to share with children and adults who love their pets. Appropriate for ages 4-7.

Walkbee
5.0 out of 5 stars If you love dogs, this is a wonderful story.
Reviewed in the United States on March 25, 2018
Found this used in a 2nd and Charles and read it in the store. Then my pregnant self cried in the store when I finished it because it was that sweet and you know, hormones. It’s a touching story about the bond between a boy and dog over time. Something about it reminded me a lot of The Giving Tree. Needless to say, I bought it and it is now sitting on my baby’s bookshelf. I highly recommend. It’s both happy and sad in the best way.
Read more
Helpful
Comment Report abuse

pphelan
5.0 out of 5 stars Beautiful illustrations.
Reviewed in Canada on May 18, 2017
Verified Purchase
What a beautiful story and has equally matched illustrations. Will make a perfect gift for new families and fans of high quality children's books.
Read more
Report abuse
See all reviews