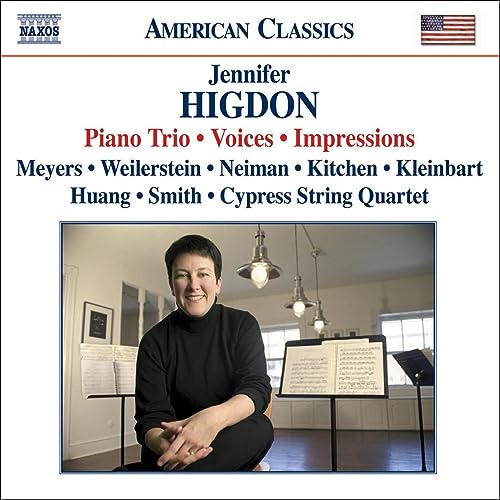 Alisa Weilerstein
December 12, 2006
4.3 out of 5 stars 11 ratings
See all 3 formats and editions Hide other formats and editions
Buy the CD album for $8.99 and get the MP3 version for FREE.&nbspCD album ships from and sold by Amazon.com. Terms and Conditions. Does not apply to gift orders. Complete your purchase of the CD album to save the MP3 version to your Music Library.

Tom Brody
5.0 out of 5 stars For those interested in "new" music that you can actually listen to, THIS IS IT!
Reviewed in the United States on May 3, 2011
Verified Purchase
This disc contain three compositions by Ms.Higdon, PIANO TRIO (2003), VOICES (1993), and IMPRESSIONS (2003). Some of the titles of the movements of these pieces evoke colors, and in this respect, resemble many of the saxophone compositions of Sam Rivers. The following review concerns only VOICES and one of the movements of IMPRESSIONS, namely, NOTED CANVAS.

VOICES contains three movements, entitled BLITZ, SOFT ENHANCING, and GRACE. BLITZ starts out with a tangled motif with glissandos, and sounding like one of Bartok's later string quartets. BLITZ also contains a motorized-puppet theme. Two minutes into the piece, one finds a stuttering theme, where the bow skitters or bounces over the strings. From 4 1/2 minutes to 5 minutes, there appears a swirling motif similar to that used by Bartok. From 5 minutes to the end of BLITZ, the music is quiet, and consists of a pizzicato motif accompanied by high-pitched squeaks.

One might suggest that, if Bela Bartok had lived longer, his compositional style might have evolved somewhat, to sound just like BLITZ. Or, alternatively, one might suggest that Bela Bartok has been reincarnated, and has appeared on earth again in the form of Ms. Jennifer Higdon, resulting in the composition called BLITZ. Or, to set forth yet another theory, Ms.Higdon is an independent genius who was inspired by Bartokian techniques while composing BLITZ.

GRACE contains broad, low-throated strokes on the cello, accompanied by higher-noted violins. There is no particular tune here. It sounds as if the ensemble was experimenting, and picking out various unrelated chords and testing how nicely they might sound in succession. Then, the sound level and vigor of the music picks up at three minutes, and the listener is treated to an upwards-spiraling motif, and at 3 minutes, 30 seconds, comes that Bartokian swirling motif again. At 4 minutes, GRACE quiets down again.

NOTED CANVAS begins like a jolly Bartokian piece, but lacking in any folkish, ethnic overtones. NOTED CANVAS has a particular harsh-sounding descending motif. From 1 minute, 45 seconds to 2 minutes, 10 seconds, the violins play a buzzing sound, reminiscent of the breathy-buzz issuing from a Jew's harp. From 4 minutes, 30 seconds to 5 minutes, 10 seconds, the harsh chord returns, but it is not descending, but instead it romps happily, using an alternative motif.

To conclude, what I like to listen to, over and over and over, is BLITZ, SOFT ENHANCING, and NOTED CANVAS. I do not have the ability to describe these particular pieces in writing. Something about Ms. Higdon's compositions renders them elusive to descriptions using words. I did the best that I could. I also own a recording of Ms.Higdon's Violin Concerto, and I recommend that as well.
Read more
8 people found this helpful
Helpful
Report abuse

Dr. Debra Jan Bibel
TOP 1000 REVIEWER
5.0 out of 5 stars Art and Architectural Music for the Chamber
Reviewed in the United States on October 13, 2010
Verified Purchase
Modern classical composer Michael Torke established himself with his rhythmic colored music [Rust; Green; Ecstatic Orange; Bright Blue Music, etc.], brief works often put to dance. Jennifer Higdon tackled colors in this album, too, with her Pale Yellow and Fiery Red for piano trio. Music and art have a close bond, and the moods and association of hues are expressed in such compositions. Higdon's works are strongly melodic and architectural; as poetic scaffolding, they have rhythm and shape and texture. Likewise, the patterns of her Voices are readily apprehended: the frantic, wild Blitz; the quieter, glimmering, and pulsing Soft Enlacing; the contemplative and accepting Grace. Art and music once again is the theme in the third work, a quartet of four movements. Indeed, her Impressions refers directly to both Monet and his contemporaries as well as to the quartets of Ravel and Debussy. We can almost sense the light and shadow, the quick but confident brush strokes, or the shimmering, gentleness, and flowing of notes. The track To The Point is said to refer to the pointillism of Seurat (actually a post-Impressionist) as well as to the rapid, short metallophone notes of the Indonesian gamelan at the 1889 World Exhibition that so impressed Ravel. The accomplished musicians perform these compositions beautifully. This is an excellent, indeed, exciting album.
Read more
5 people found this helpful
Helpful
Report abuse

Marcia Lotter
4.0 out of 5 stars Four Stars
Reviewed in the United States on January 12, 2016
Verified Purchase
Great service and condition. Also great price. I like the works, but they aren't my favorites of hers.
Read more
Helpful
Report abuse

Mr. Ra Gannon
4.0 out of 5 stars Higdon Chamber Music
Reviewed in the United States on July 12, 2008
Verified Purchase
An interesting and enjoyable program by an exciting new composer. Anyone interested in approachable modern music should try this one.
Read more
3 people found this helpful
Helpful
Report abuse

Michael Tierra
5.0 out of 5 stars This is great music beautifully performed
Reviewed in the United States on January 1, 2007
Jennifer Higdon is emerging as one of America's greatest living composers. Her music has the distinction of being at once complex, sophisticated but readily accessible emotionally. Her compositional techniques are eclectic, tonally familiar and can reach to levels of high lyricism to fiery bartokian savagery. These string quartets are worthy extensions leading from Debussy to Bartok. The music is technically very demanding but this performance is fantastic, bright, fresh and spontaneous even upon frequent listening. With its unselfconscious style, there is something uniquely fresh and American sounding to Higdon's music. This album should be a treat for any lover of 21st century contemporary music.
Read more
24 people found this helpful
Helpful
Report abuse

Bill Townsend
5.0 out of 5 stars Superb example of what makes Higdon an American treasure
Reviewed in the United States on March 18, 2007
I bought this CD primarily to hear the wonderfully talented violinist Anne Akiko Meyers, and her playing certainly is as great as ever. I was pleasantly suprised at how easy the rest of this CD is to listen to. Jennifer Higdon is truly one of our great treasures and her performance here is to be commended. Bravo!
Read more
10 people found this helpful
Helpful
Report abuse

Laurie A. English
5.0 out of 5 stars Excellent CD
Reviewed in the United States on March 30, 2008
My daughter plays violin and we absolutely loved this CD. Ordered it after hearing one of the pieces on XM Classics and had to purchase the CD.
Jennifer Higdon is amazing!
Read more
3 people found this helpful
Helpful
Report abuse
See all reviews