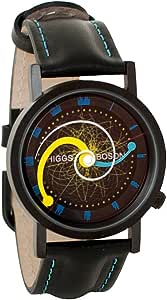 4.0 out of 5 stars 43 ratings
| 3 answered questions
Available from these sellers.

See product specifications
Share
Have one to sell?
Sell on Amazon

The Higgs boson is mostly just theoretical, even after the successful experiments at the Large Hadron Collider. But this watch is 100% real! The Higgs boson may have no spin, electric charge, or color change, but the Higgs boson watch has a nice imitation leather band and a spinning second hand that spirals around. The image shows what is believed to be evidence of the Higgs decaying into other bosons during a collision.

Okay, let's be honest. None of us really understands this. But that doesn't mean you can't enjoy this watch and look much smarter than your friends when you're wearing it. They'll just assume you must understand the finer points of particle physics much better than they do.

4.0 out of 5 stars
4 out of 5
43 customer ratings
How does Amazon calculate star ratings?
Amazon calculates a product’s star ratings based on a machine learned model instead of a raw data average. The model takes into account factors including the age of a rating, whether the ratings are from verified purchasers, and factors that establish reviewer trustworthiness.

Lord of Karma
5.0 out of 5 stars Love it!
Reviewed in the United States on February 19, 2014
Verified Purchase
I had been eyeing this watch for a while but was a little hesitant to buy it because of the poor reviews. My husband picked it up for me as a gift, and I'm so glad he did! It's very unusual, eye-catching, and easy to read, imo (the trick is to look at the dots, not the arms). The watch face is 1-1/4" in diameter (definitely larger than a US quarter) and the band is about 3/4" at its widest, I have small wrists so I wear it on the second or third smallest notch, but it's still very comfortable and looks nice.

I work in a fairly physical job (a busy library where I do lots of heavy lifting), and so far I've had no problems with it holding together or keeping time. The hands (particularly the minute and second hands) are brightly colored and stand out pretty well even in dim light. The background (including the hour marks) are easy to see in bright light, but not so much in dim light. In dim light, all you can really see are the hands, which I think has a neat effect, personally.

The presentation is nice and of good quality. I was looking for something quirky and unusual, yet elegant enough to wear to work. This fit the bill perfectly. I'm very pleased with it and highly recommend it to anyone looking for a really nice, unusual wrist watch :)

Herb S
5.0 out of 5 stars I concede the band is subpar but can easily be upgraded
Reviewed in the United States on October 20, 2015
Verified Purchase
I bought this on 12July2013 and am thrilled with it. The utter distinctiveness of the dial often elicits fascination in those who see it. I remove and pocket it while doing heavy physical work (digging, hammering, etc.) to prevent the hands from dislocating or damaging the clock movement. I concede the band is subpar but can easily be upgraded. I wear it daily and have had to replace the battery (annually). I got it for its unique dial and am well pleased with it. With all the negative comments I was hesitant to order it but it's performance has been great after over 2 years (Japanese movement) and I am very happy I got it.
Read more
2 people found this helpful
Helpful
Comment Report abuse

K. Brown
5.0 out of 5 stars great watch!
Reviewed in the United States on August 31, 2019
Verified Purchase
Love the watch! It was just as advertised and packaging was great.
Read more
Helpful
Comment Report abuse
See all reviews from the United States

Pats86
5.0 out of 5 stars Best looking watch I ever bought
Reviewed in the United Kingdom on January 9, 2020
Verified Purchase
Lovely watch and a great talking point.
Came in a very nice tin too.

Page 1 of 1 Start overPage 1 of 1
This shopping feature will continue to load items when the Enter key is pressed. In order to navigate out of this carousel please use your heading shortcut key to navigate to the next or previous heading.
Back
Next
Pages with related products. See and discover other items: vegan stocking stuffers, futuristic fashion, futuristic watch, futuristic watches, science watch, unusual watches