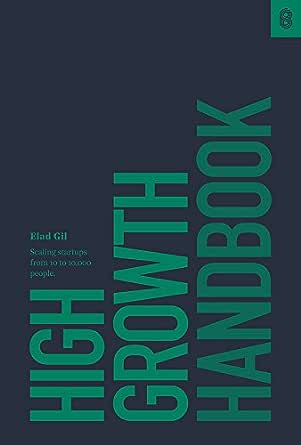 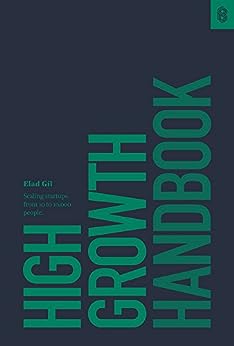 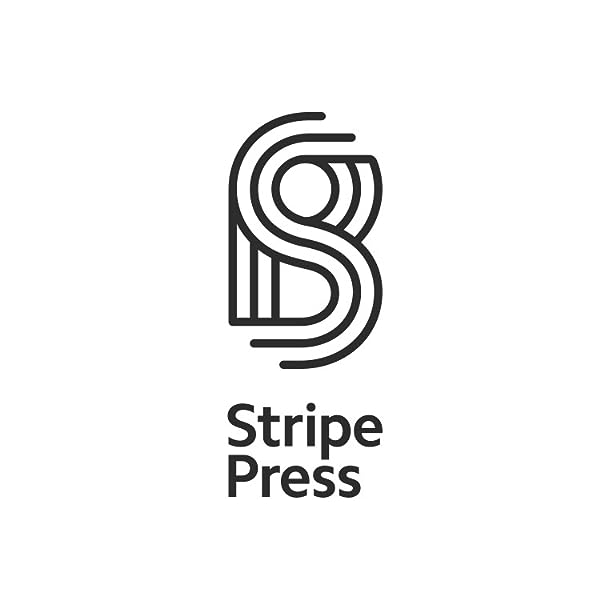 Enjoy a great reading experience when you buy the Kindle edition of this book. Learn more about Great on Kindle, available in select categories.
Read more Read less
Previous page
Next page
click to open popover

"Elad Gil is one of Silicon Valley's seriously knowledgeable and battle-tested players. If you want the chance to turn your startup into the next Google or Twitter, then read this trenchant guide from someone who played key roles in the growth of these companies." --Reid Hoffman, cofounder of LinkedIn, co-author of the #1 NYT bestsellers The Alliance and The Startup of You

"Elad first invested in Airbnb when we were less than 10 people and provided early advice on scaling the company. This book shares these learnings for the next generation of entrepreneurs." --Nathan Blecharczyk, cofounder of Airbnb, Chief Strategy Officer, and Chairman of Airbnb China --This text refers to an out of print or unavailable edition of this title.

Elad Gil is an entrepreneur, operating executive, and investor or advisor to private companies such as Airbnb, Coinbase, Checkr, Gusto, Instacart, OpenDoor, Pinterest, Square, Stripe, Wish, and others. He is cofounder and chairman at Color Genomics.

Previously, he was the VP of Corporate Strategy at Twitter, where he also ran various product (Geo, Search) and other operational teams (M&A and Corporate Development). Elad joined Twitter via the acquisition of MixerLabs, a company where he was co-founder and CEO. MixerLabs ran GeoAPI, one of the early developer-centric platform infrastructure products. Elad spent many years at Google, where he started the mobile team and was involved in all aspects of getting that team up and running. He was involved with three acquisitions (including the Android team) and was the original product manager for Google Mobile Maps and other key mobile products.

Prior to Google, Elad had product management and market-seeding roles at a number of Silicon Valley companies. He also worked at McKinsey & Co. Elad received his Ph.D. from the Massachusetts Institute of Technology and has degrees in Mathematics and Biology from the University of California, San Diego. --This text refers to an out of print or unavailable edition of this title.

4.6 out of 5 stars
4.6 out of 5
211 global ratings
How are ratings calculated?
To calculate the overall star rating and percentage breakdown by star, we don’t use a simple average. Instead, our system considers things like how recent a review is and if the reviewer bought the item on Amazon. It also analyzes reviews to verify trustworthiness.

Matt Sherman
2.0 out of 5 stars Lovely content, physically unreadable
Reviewed in the United States on August 18, 2018
Verified Purchase
I’m a fan of Elad’s writing (many of these article started as blog posts), and the advice in this book is worth a read.

But as a product, I suggest avoiding the hardcover version. The typography is so small that I can’t just lean back and read it. I recognize it’s odd to focus on such a thing for a book review, but this fact made the book unusable for me.

Louis N
3.0 out of 5 stars Too focused on hiring
Reviewed in the United States on July 29, 2018
Verified Purchase
This book feels like a collection of recommendations on how to hire for every single jobs in a high growth company (COO, VP of X/Y/Z). Some good advices for sure but I would have love something more focused on strategies, improvements, processes, mistakes, things to avoid than just hiring hiring hiring. It may be because I haven't run a High Growth companies (yet?), I guess the few people who do (and have a big budget) will probably enjoy this book a lot. For anyone running a small/early startup and looking at emulating some behaviour/decision I don't think you will get the amazing insights I was after...
Read more
36 people found this helpful
Helpful
Report abuse

Jonathan Bannon Maher
5.0 out of 5 stars An invaluable compendium of organizational scaling knowledge
Reviewed in the United States on July 31, 2018
Verified Purchase
Elad has produced perhaps the most comprehensive resource for scaling an organization from one to one thousand people, sharing the experience of his own professional adventures in scaling companies, in conjunction with wisdom shared during interviews of some who have successfully scaled organizations. I bought this looking for assistance in scaling two startups working to lead the global energy industry, and as I currently live outside of Silicon Valley, there are no easily accessible relevant credible experts to consult.

Elad recommends utilizing the book as a reference, and I think it would be most useful to those who read sections personally relevant to their careers, since reading this book in its entirety is a bit like reading about how to win the Super Bowl, where few have the inherent capacity to run the playbook and team to a championship ring.

The following provides a brief synopsis of a portion of my notes, including at least one idea shared by each interviewee, with unattributed notes derived from Elad's insights shared during interview interludes, while trying not to provide more information than I as an author would want given away about my books:

Z
5.0 out of 5 stars Excellent tactical manual for post-product-market fit startups
Reviewed in the United States on September 24, 2018
Verified Purchase
This book is an incredibly insightful manual of practical advice.

Highly recommend this book to all founders who have hit, or who aspire to hit, product-market fit.

(Disclaimer: most of the advice in this book is relevant only to companies who are post-product-market fit, which is probably fewer than 1% of "startups".)
Read more
11 people found this helpful
Helpful
Report abuse

George X Zeng
5.0 out of 5 stars Extraordinary reference for growth companies - and entrepreneurs who want to be prepared for growth
Reviewed in the United States on September 18, 2018
Verified Purchase
Elad has written an extraordinary reference for growth stage companies - and for entrepreneurs who want to be well positioned for being in growth stage at a future time. As a founder and startup junkie, I’ve seen plenty of great material on starting a company (Paul Graham essays, Lean Startup, Four Steps to the Epiphany, Zero to One, etc.). Perhaps because there are much less entrepreneurs that have achieved this level of success - but I’ve not seen nearly as many materials on running/planning for growth stage.

With that lens, I’ve read this book end to end and have learned a few takeaways that have fundamentally changed how I think about startups: (1) most founders I know think very deeply about building product for great markets, but we don’t spend nearly as much energy on thinking about building great channels; (2) it’s important to build dynamic boards that evolve over time depending on their ability to offer value to the company; (3) hire specifically for the next 12-18 months during the hyperstage growth periods of a company; (4) it can be a competitive advantage to RAISE prices rather than to lower prices.

C + N
5.0 out of 5 stars Incredibly practical startup advice
Reviewed in the United States on October 3, 2018
Verified Purchase
Elad has one of the most impressive resumes you'll ever see. There is an endless supply of business books written by "business coaches" that provide nothing more then motivational quotes and generic business advice. Elad's High Growth Handbook provides practical, immediately implementable advice for any startup, regardless of company stage. Product management, roles, organization structure, recruiting & hiring... and so much more. This will be on my desk for years to come.
Read more
2 people found this helpful
Helpful
Report abuse

Stephanie
5.0 out of 5 stars EXCELLENT BUSINESS BOOK - IF you are engrained in the startup culture get this!
Reviewed in the United States on March 5, 2019
Verified Purchase
Fantastic read. After reading the book, one of the first things the author says is that the book is made to be a reference guide and not to be read front to back - I go back to this book at least once a month. I've also shared it with my colleagues and those who are trying to figure out why their startup is stagnant. I highly recommend it. It really points out that you need to have a SOLID and a good foundation before growth can be the next step.
Read more
Helpful
Report abuse

Scott Bundgaard
5.0 out of 5 stars Very helpful if you're working on a startup!
Reviewed in the United States on September 6, 2018
Verified Purchase
This book is incredibly instructive as we work to implement key growth strategies gleaned from this book.
Read more
4 people found this helpful
Helpful
Report abuse
See all reviews

Christopher Holton
3.0 out of 5 stars Good book, but repititive
Reviewed in the United Kingdom on August 1, 2018
Verified Purchase
I did enjoy the book, and you will too, but I have read better. By the second half I was slipping through quite a bit to get to the end.
Read more
3 people found this helpful
Report abuse

Cityguylondon
5.0 out of 5 stars Scaling up made easier
Reviewed in the United Kingdom on October 11, 2018
Verified Purchase
This handbook really decodes growth essentials and for any start up transforming into a scale up its a must read!
Read more
Report abuse

A S
5.0 out of 5 stars A great book for scaling from 1 to 100
Reviewed in the United Kingdom on October 3, 2018
Verified Purchase
Most entrepreneurship books are written for the zero to one stage. This is a great guide for the next set of challenges facing founders in the scale stage of their businesses
Read more
One person found this helpful
Report abuse

Peadar Coyle
5.0 out of 5 stars Tells you a lot about growing a company
Reviewed in the United Kingdom on September 8, 2018
Verified Purchase
Very good book, a lot of value in one book.
Read more
One person found this helpful
Report abuse
See all reviews