You've subscribed to The Highland Series! We will preorder your items within 24 hours of when they become available. When new books are released, we'll charge your default payment method for the lowest price available during the pre-order period.
Update your device or payment method, cancel individual pre-orders or your subscription at
Your Memberships & Subscriptions
There was an error. We were unable to process your subscription due to an error. Please refresh and try again. 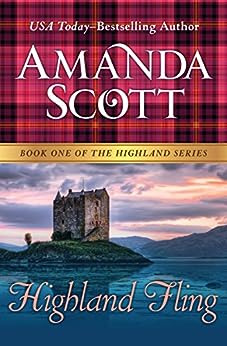 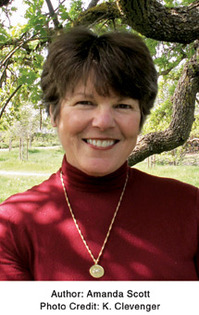 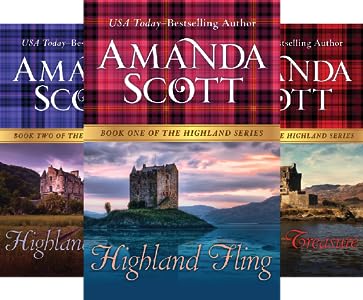 “[Scott is] a true master of the Scottish historical romance.” —Romance Reviews Today

A fourth-generation Californian of Scottish descent, Amanda Scott is the author of more than fifty romantic novels, many of which appeared on the USA Today bestseller list. Her Scottish heritage and love of history (she received undergraduate and graduate degrees in history at Mills College and California State University, San Jose, respectively) inspired her to write historical fiction. Credited by Library Journal with starting the Scottish romance subgenre, Scott has also won acclaim for her sparkling Regency romances. She is the recipient of the Romance Writers of America’s RITA Award (for Lord Abberley’s Nemesis, 1986) and the RT Book Reviews Career Achievement Award. She lives in central California with her husband.

The Scottish Highlands in 1750 endure grievous hardships under the rule of an English king. Beautiful, golden-haired Maggie Macdrumin is determined to help liberate her fellow Scotsmen, but upon arriving in London, she's arrested and brought to court, falsely accused of stealing a man's purse. In a bid to save herself, she impulsively lays claim to a family connection with well-known Edward Carsley, the powerful Earl of Rothwell--and her family's worst enemy.

The handsome earl is adamantly opposed to the cause of the Jacobites, and when Maggie is turned over to him, he sternly forbids her to continue her journey. Maggie, passionately dedicated to her cause, constantly crosses swords with the powerful earl. How the two will remain faithful to their kinsmen and still find a way to resolve the growing desire between them is anyone's guess. --This text refers to an alternate kindle_edition edition.

4.0 out of 5 stars
4 out of 5
64 global ratings
How are ratings calculated?
To calculate the overall star rating and percentage breakdown by star, we don’t use a simple average. Instead, our system considers things like how recent a review is and if the reviewer bought the item on Amazon. It also analyzes reviews to verify trustworthiness.
Top reviews

Sandy Milan
5.0 out of 5 stars Just when I was becoming jaded, I discovered this author!! Brilliant
Reviewed in the United States on April 20, 2013
Verified Purchase
I truly adore historical romance because I love both history and romance. Recently I've read loads of disappointing Regencies etc where modern attitudes have taken over true romance and the history part. I'm no prude and love steamy stories too but I prefer that more in contemporaries or post wedding in historicals, as it is more credible. However my first love is the historical part and by accident I discovered this author and I'm thrilled. This book combined loads of interesting history plus a nice developing romance. There were some laugh out loud moments too. I agree with the other reviewer, I loved how the wedding came about.

There is no other brief summary so here goes: Our h is the daughter of a Scottish laird and goes to London to meet Bonny Prince Charlie who is supposedly there to meet clandestinely with his followers. Unfortunately once she arrives in London her carriage is attacked and she is injured. She is arrested and in desperation uses the name of the Earl of Rothwell, who now owns her family's property in Scotland. Once she meets the 'foppish' Earl, our H, he doesn't allow her to leave his house or protection for various reasons. Our h is feisty and our H is delightfully strong and a perfect match for her. They end up travelling to Scotland to her family's property and he gets to see the conditions that she'd been telling him about. Along the way they are 'forced' into marriage (such a delightful part of the book), which they plan to have annulled once he returns to England. And so their adventures continue and there are a whole bunch of great secondary characters too. I loved the H's brother James and enjoyed his romance with another feisty character in the book.

For those readers who want steamy sex on every other page then this isn't the book for them but if you are like me and have a romantic, yet historical soul, you'll love it.
Read more
24 people found this helpful
Helpful
Report abuse

Elyusia
2.0 out of 5 stars Poorly written romance!!!
Reviewed in the United States on May 11, 2016
Verified Purchase
I had a very hard time staying interested in this story. The romance lacked believable passion and inertia. After the first sex scene, about 60% into the book (on Kindle) I felt so disappointed. I felt like the author was uncomfortable writing sex scenes. These scenes did not improve.

The biggest issue I had was that I could not believe Maggie tolerated Ned's controlling behavior... she was written too independent and free thinking.
Read more
6 people found this helpful
Helpful
Report abuse

Kindle Customer
5.0 out of 5 stars Hey, this was a terrific book!
Reviewed in the United States on October 27, 2017
Verified Purchase
All through the book, I kept saying, "Wonder if this is true?" . At the end, the author includes a section that clears it up! So the story was very true to life. The characters were also believable and the plot was great! I have read books by Amanda Scott before, but forgot her! So glad I found her again.
Read more
One person found this helpful
Helpful
Report abuse

Kindle Customer
5.0 out of 5 stars Most excellent highland romance
Reviewed in the United States on June 24, 2016
Verified Purchase
Mix a strong minded Scottish lassie with an equally strong minded English aristocrat, add a Jacobite threat to the pot, along with the lassie's father being the laird of the land that was awarded to the English aristocrat, add whiskey, and add families. The story is well written and the characterization make for an excellent book for adult readers due to sexual content and violence.
Read more
One person found this helpful
Helpful
Report abuse

Mrs. D, Kansas City
4.0 out of 5 stars Lots of Information Almost Spoiled It For Me! But...
Reviewed in the United States on August 15, 2013
Verified Purchase
Great writing... Unfortunately, I cannot agree more that the beginning of the book drags, quite a bit. I always enjoy a bit of history to give depth to a story, but too much of anything isn't good. The background information on all the characters and all the wars and all the troubles... this plethora of historic detail makes paying attention extremely difficult, after a while. At times, I found myself rereading the same page or passage more than once. It wasn't the heavy Scottish brogue that encumbered me. It was the vast amount of weighty details (and absolutely NO romance!) in the first third of the book that made me stop reading it, for a while... and almost made me give up, altogether. However, my curiosity about Maggie and Rothwell nagged at me, and I found myself going back to attempt finishing the book.

I'm so glad I followed my "second" mind, because right before the half-way point of the book, I found myself enjoying my read immensely- even laughing out loud at all the things that happened on the way to and after the arrival at Maggie's home. I won't spoil it for anyone. Just know that you will have to be very, very patient while reading to get to the heart of Maggie and Rothwell's relationship... VERY patient. But, there are golden nuggets to be gleaned from this tale of romance, if you can stand the wait.
Read more
4 people found this helpful
Helpful
Report abuse

Amazon Customer
5.0 out of 5 stars Highland Fling
Reviewed in the United States on June 24, 2014
Verified Purchase
Och, but I enjoyed this read enough to order book 2 of the Highland Series as soon as I finish this review. While some characters were certainly not lovable, they added dimension to the story. Loved it from beginning to end, and I'm already guessing the main protagonists in book 2. So if you love very historical books about the Scottish Highlands, start reading.
Read more
One person found this helpful
Helpful
Report abuse

Carole H. Elmore
4.0 out of 5 stars A Fun Read
Reviewed in the United States on April 2, 2014
Verified Purchase
This story is a mix of comedy and drama. Being a retired history teacher, the sorry seems to be historically accurate. The story tells of a English Earl and and a Scottish woman who are enemies. However, in order to survive they must trust one another. There is romance, humor, and tension throughout. Enjoy!!
Read more
2 people found this helpful
Helpful
Report abuse
See all reviews

Jamie fan
2.0 out of 5 stars a disappointment
Reviewed in the United Kingdom on September 19, 2007
Verified Purchase
I was looking forward to my first amanda scott novel and I was really disappointed! The story line was weak, the characters had no rapport - in fact the `hero` was anything but. Also, I found the dialect used by Lord Rothwell`s brother very annoying for one of the `nobility` - it was more like the dialect of a London chimney sweep! I doubt if I`ll read any other books by this author.
Read more
5 people found this helpful
Report abuse

Redfox
5.0 out of 5 stars history brought to life
Reviewed in the United Kingdom on August 10, 2013
Verified Purchase
Just couldn't put this book down. Have now read the next two in the series and am now reading the fourth. The historical facts are intriguing as is the way amanda scott weaves them into her own fictional composition.
Read more
Report abuse

annetta
5.0 out of 5 stars a great read
Reviewed in the United Kingdom on August 12, 2013
Verified Purchase
This was a very enjoyable book. The characters take you along with there very believable story and the historic content is accurate . I will read more from this author.
Read more
Report abuse

Mrs. Pamela A. Wright
5.0 out of 5 stars Excellent read
Reviewed in the United Kingdom on July 19, 2013
Verified Purchase
This is the first time I've read any of Amanda Scott's books but it won't be the last, especially as I love anything Scottish.
Read more
Report abuse

Amazon Customer
4.0 out of 5 stars madam muck
Reviewed in the United Kingdom on August 4, 2013
Verified Purchase
Great book . I did take a wee while to grasp the beginning however,now I'm racing on .Would recommend this book .
Read more
Report abuse
See all reviews