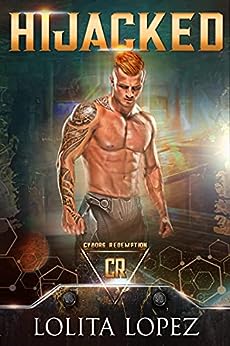 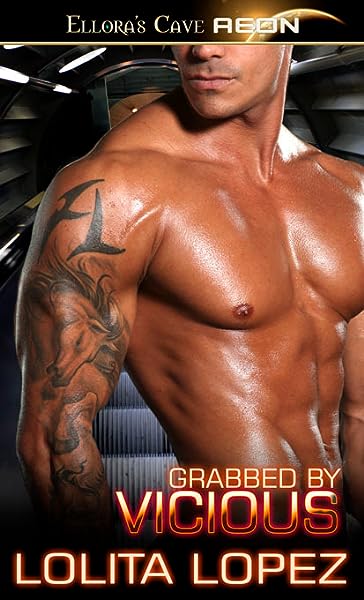 Spoiled heiress Camila has enjoyed a privileged life thanks to her politically connected family. Sheltered from the harsh realities of the galaxy, she has no idea that her vacation plans are about to go horribly awry.

To survive the emperor’s murderous plot, cyborgs Misko, Andro and Branko lead a small group of civilians into an escape pod. During a chaotic launch, Andro is badly injured, and Misko and Branko find themselves holding their panicked group together. Soon, their limping escape pod strands them in space.

All seems lost—until a private ship crosses their path.

Hijacked by filthy criminals, Camila tries to flee but is captured by Misko. He quickly identifies her as precious cargo and decides to keep her—in his cabin, tied to his bed.

Misko isn’t sure why he’s fascinated by the bratty blonde who tried to claw his eyes out, but he’s compelled to keep her close—naked and writhing underneath him close.

Faced with losing Misko, Camila vows to risk everything to save him from the emperor’s death squads. She wants Misko in her life, by her side, in her bed, forever—and she always gets what she wants.

As a co-ed studying biochemistry and genetics at Texas A&M University, Lo dabbled in creating naughty tales to entertain her friends. Study for a midterm or pen a deliciously dirty story to delight her small band of fans? Not surprisingly, Lo is now on an extended sabbatical from college.

Kindle Customer
5.0 out of 5 stars Liked it.
Reviewed in the United States 🇺🇸 on September 11, 2022
Verified Purchase
The Empower is nuts. Camila is a sweet, organized, caring person in private. Online as a social media star she is spoiled, uncaring, and lazy. The Cyborgs are being rounded up along with their families and tortured and killed. Camila resists and then realizes babies and children are involved and decides to help. Loved it. Love Lolita Lopez . Need more from her!!!
Read more
Helpful
Report abuse

ArcaneParadox
5.0 out of 5 stars Wonderful
Reviewed in the United States 🇺🇸 on July 2, 2022
Verified Purchase
LoLo has again enthralled, fascinated and entertained us with the workings of her mind you keep writing and I will keep buying them
Read more
One person found this helpful
Helpful
Report abuse

Kindle Customer CarmenB
5.0 out of 5 stars Family Ties
Reviewed in the United States 🇺🇸 on August 24, 2021
Verified Purchase
Wow! This was a great read. I loved the relationship that built between Misko, the cyborg and Camilla, the spoiled brat. The action had me sitting up asI was reading because OMG, the Emperor Shui is bat sh#& crazy! This is an awesome new series. I’m looking forward to book 3.
Read more
Helpful
Report abuse

C. Stone
4.0 out of 5 stars so good
Reviewed in the United States 🇺🇸 on September 17, 2021
Verified Purchase
probably my fave in this new series by sci fi romance authors. cant wait to read more about these cyborgs
Read more
Helpful
Report abuse

Danielle
5.0 out of 5 stars Loved it
Reviewed in the United States 🇺🇸 on August 23, 2021
Verified Purchase
I really enjoyed this story, it’s not long, but it well developed. This series has some of my favorite romance authors. Lolita Lopez’s Grabbed series was my first sci fi romance series and remains to this day one of my favorites. AM Griffin and Michelle Howard are next. The series Dangerously by Griffin and Warlord by Howard are tops for me also.
Read more
Helpful
Report abuse

superchk
VINE VOICE
2.0 out of 5 stars Not bad story/plot, but the dialogue and interactions are too unrealistic/juvenile
Reviewed in the United States 🇺🇸 on January 13, 2023
I liked the first in this series that I read, so I was excited when this one came up on my kindle. But the writing of this author's contribution to the Cyborg series is very sub-par. The dialogue is sophomoric, bordering on stupid. The characters are like Disney cutouts or something. Just weird/unrealistic. Like anyone in her situation would be concerned about hurting her hijacker's feelings?!?!?!?! Between the insta-love, the childish characterizations, and the pedantic dialogue, I didn't make it past the halfway point. Hard pass on this one - just a waste of time.
Read more
Helpful
Report abuse
See all reviews

Bookwormruth
5.0 out of 5 stars Loved it
Reviewed in the United Kingdom 🇬🇧 on February 7, 2022
Verified Purchase
This was a very well written sci-fi romance with some very hot scenes. I can't wait to read more in this series.
Read more
Report abuse

Kindle Customer
5.0 out of 5 stars Hijacked
Reviewed in Canada 🇨🇦 on September 27, 2021
Verified Purchase
I admit I just allowed myself to bypass a spoiled rich party girl to become a hero and save the day. Then there is the hot romance!!!
Read more
Report abuse
See all reviews
Report an issue
Does this item contain inappropriate content?
Report
Do you believe that this item violates a copyright?
Report
Does this item contain quality or formatting issues?
Report