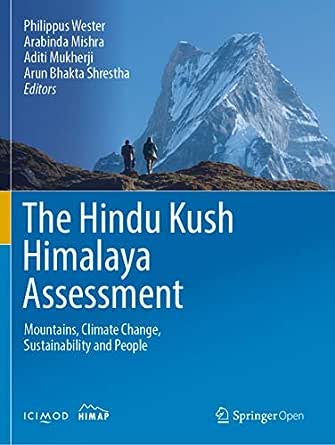 Flip to back Flip to front
Audible Sample Playing... Paused   You are listening to a sample of the Audible narration for this Kindle book.
Learn more
ISBN-13: 978-3319922874
ISBN-10: 3319922874
Why is ISBN important?
ISBN
This bar-code number lets you verify that you're getting exactly the right version or edition of a book. The 13-digit and 10-digit formats both work.

This open access volume is the first comprehensive assessment of the Hindu Kush Himalaya (HKH) region. It comprises important scientific research on the social, economic, and environmental pillars of sustainable mountain development and will serve as a basis for evidence-based decision-making to safeguard the environment and advance people’s well-being. The compiled content is based on the collective knowledge of over 300 leading researchers, experts and policymakers, brought together by the Hindu Kush Himalayan Monitoring and Assessment Programme (HIMAP) under the coordination of the International Centre for Integrated Mountain Development (ICIMOD). This assessment was conducted between 2013 and 2017 as the first of a series of monitoring and assessment reports, under the guidance of the HIMAP Steering Committee: Eklabya Sharma (ICIMOD), Atiq Raman (Bangladesh), Yuba Raj Khatiwada (Nepal), Linxiu Zhang (China), Surendra Pratap Singh (India), Tandong Yao (China) and David Molden (ICIMOD and Chair of the HIMAP SC).

This First HKH Assessment Report consists of 16 chapters, which comprehensively assess the current state of knowledge of the HKH region, increase the understanding of various drivers of change and their impacts, address critical data gaps and develop a set of evidence-based and actionable policy solutions and recommendations. These are linked to nine mountain priorities for the mountains and people of the HKH consistent with the Sustainable Development Goals.

This book is a must-read for policy makers, academics and students interested in this important region and an essentially important resource for contributors to global assessments such as the IPCC reports.

“This is a landmark piece of work focused on a region that is a hotspot for climate change impacts.” (Damian Carrington, The Guardian, theguardian.com, February 04, 2019) --This text refers to the hardcover edition.

Dr Philippus (Flip) Wester joined ICIMOD in March 2013 as Chief Scientist Water Resources Management, and was appointed Regional Programme Manager of ICIMOD’s Mountain Knowledge and Action Networks (MKAN) Regional Programme in 2018. He is the Coordinator of the Hindu Kush Himalayan Monitoring and Assessment Programme (HIMAP) and the Principal Investigator of the Himalayan Adaptation, WAter and REsilience (HI-AWARE) consortium. From 2000 to 2012 he was Assistant Professor for Water Governance and Institutional Change at Wageningen University, after working with the Ministry of Foreign Affairs of the Netherlands as Bilateral Associate Expert in Water Management in Bangladesh from 1995 to 1998 (with the Bangladesh Water Development Board) and in Mexico from 1998 to 2000 (with the International Water Management Institute). He is passionate about developing and nurturing sustainable mountain development knowledge action networks, enhancing capacity and collaboration among universities, researchers, and policy makers in the Hindu Kush Himalaya, and developing evidence-based policies and practical solutions based on research, knowledge sharing and skills development. Trained as an interdisciplinary water management researcher with a PhD in water resources management from Wageningen University, he has 25 years of experience, focusing on the interrelationships between the social, technical, political and physical dimensions of climate change adaptation and water resources management.
Dr Arabinda Mishra joined ICIMOD in June 2015 as a Senior Social Scientist and became the Theme Leader of the Livelihoods Thematic Area in January 2018. Earlier he was at TERI University (TU) in New Delhi, India, joining in 2005 as an Associate Professor and becoming a Professor in 2013. Since 2008 till his leaving the university, he was also the Dean of the Faculty of Policy and Planning at TERI University and from 2008 to 2013 he had the concurrent responsibility of Director, Earth Science and Climate Change Division in The Energy and Resources Institute (TERI) in New Delhi. Prior to joining TERI University, he was a Fellow at the Centre for Multi-disciplinary Development Research (CMDR) in Karnataka, an institution affiliated to the Indian Council of Social Science Research (ICSSR). Trained as an economist and with a PhD from Sambalpur University, he has over 25 years of teaching and research experience, successfully supervised doctoral research of 6 students, published over 30 peer reviewed journal papers and book chapters, and has several edited books to his credit. In the past 10 years he has been working in the field of adaptation to climate change – more recently on mountain livelihoods enhancement and resilience building as well – leading major research and consultancy projects, designing and delivering capacity building programmes on adaptation policymaking, alongside integrating research with teaching and curriculum development.
Dr Aditi Mukherji is a Theme Leader, Water and Air, at ICIMOD where she leads a group of 30 professionals in their work on water, air pollution and climate change. Her own research at ICIMOD looks at issues of local water access for the mountain communities. Earlier, she was a Senior Researcher at the International Water Management Institute (IWMI), based at Colombo, Sri Lanka. She has over 18 years of experience working on policies and institutions of water resources management with a special focus on water-energy-food nexus. She has worked in South Asia, the Nile Basin, Central Asia and in the Hindu Kush Himalaya. She has published over 50 peer reviewed research papers, including two edited books by Taylor and Francis. In 2012, she was awarded the Inaugural Norman Borlaug Award for Field Research and Application by the World Food Prize Foundation, USA. She is currently a part of the 6th Assessment Report team of the IPCC and will contribute as a Coordinating Lead Author (CLA) of the Water Chapter and as a Review Editor (RE) of the Special Report on Oceans and Cryosphere in a Changing Climate (SROCC). Aditi is a human geographer and has a PhD from Cambridge University, United Kingdom.
Dr Arun Bhakta Shrestha is a Senior Climate Change Specialist at ICIMOD and Programme Manager of the River Basins and Cryosphere Regional Programme. He has a PhD in Earth Sciences from the University of New Hampshire, USA, and a Master's degree in Hydraulic Engineering from Minsk, former USSR. Before joining ICIMOD, Dr Shrestha worked for the Department of Hydrology and Meteorology, Nepal. His main areas of expertise include climate change, glaciers and glacial hazards, glacial lake risk mitigation, atmospheric environment, and hydrological modelling. Dr Shrestha has had several publications in peer reviewed international journals, national journals, and magazines. He was involved in the Tsho Rolpa Glacial Lake Outburst Flood Risk Reduction Project and was in the scientific team for the preparation of the First National Communication of Nepal to the United Nations Framework Convention on Climate Change (UNFCCC). Dr Shrestha is on the editorial panel for Geomatics, Natural Hazards and Risk (Tylor and Francis) and Journal of Hydrology Meteorology (Society of Hydrologists and Meteorologists, Nepal). Dr Shrestha has been awarded Mahendra Vidya Bhushan (medal) by Late King of Nepal, Birendra Bir Bikram Shah and with Gorkha Dakchhin Bahushan (medal) by Former King of Nepal, Gyanendra Bir Bikram Shah.
--This text refers to the hardcover edition.
Read more