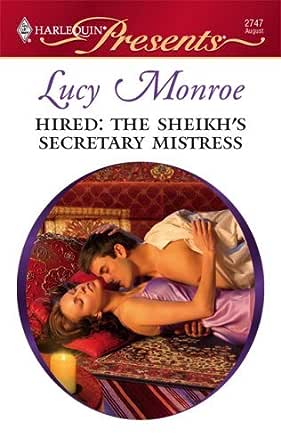 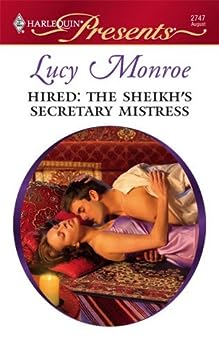 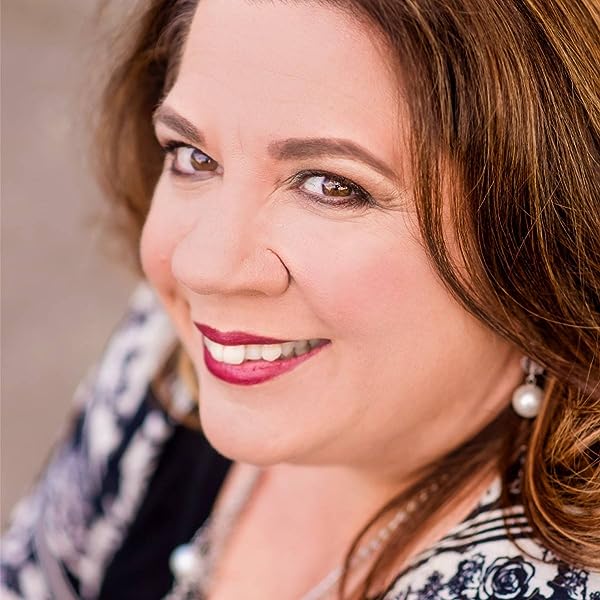 USA Today Bestseller Lucy Monroe finds inspiration for her stories everywhere as she is an avid people-watcher. She has published more than fifty books in several subgenres of romance and when she's not writing, Lucy likes to read.  She's an unashamed book geek, but loves movies and the theatre too. She adores her family and truly enjoys hearing from her readers! Visit her website at: http://lucymonroe.com --This text refers to an out of print or unavailable edition of this title.

"What did you say?" Grace felt like Amir had just punched her right in the solar plexus, but all he'd really done was ask her a question.

She closed her eyes and opened them again, but he was still there, her gorgeous, totally sexy, only-man-in-the-world-for-her boss. The expression of expectation on his too handsome face said he had actually made the request that she was desperately hoping had been a figment of her imagination.

Hadn't it been awful enough when he'd announced to her a mere six weeks ago that his father had decreed Amir was to marry some princess from a neighboring sheikhdom? Grace's heart had shriveled and come close to dying at how easily her usually independent and stubborn boss had so easily submitted to his father's demand.

Then a reprieve had come for Grace's bleeding emotions when Princess Lina had ended up eloping with an old flame and nullifying the contract the two powerful sheikhs had signed. That had happened almost two weeks ago and Grace was just overcoming the jagged edges of pain left by the king's edict and his youngest son's acceptance of it.

Now Amir wanted her to find him a wife? Just kill her now because life couldn't get much worse.

Okay, maybe it could, but even plain PAs had the right to their moments of drama.

"What? Why?" He was happy in his serial liaisons, or at least he'd always acted like he was.

Definitely, he'd never fallen in love with any of them. As far as she knew—and she knew him better than anyone else in his life, including his family—Amir had not been in love since he was eighteen years old. Not that he admitted now that it had been love then.

But she knew the signs of a true and abiding love. Didn't she live with them on a personal basis every day?

Amir had loved his Yasmine enough to ask her to marry him. They were only engaged for three months, the wedding less than a month away—which in Grace's mind showed just how much he had loved the other woman to press for such a speedy wedding—when Yasmine was killed in a freak accident. It was Grace's personal belief that the loss of his first love had impacted Amir more strongly than he ever wanted to admit to himself or his family.

But even so, this was unbelievable.

"My father wants me to settle down," Amir said with a shrug.

How could he be so blasé about this? Didn't he care that he was breaking her heart into tiny, bitty, never-to-be-put-together-again pieces? All right, so he didn't know, but did that excuse him? The jury was still out on that one, just like it was out on the issue of the pain he caused her regularly with his little liaisons.

"But he hasn't said anything about selecting another wife for you, has he?" she asked with desperate logic.

"I see no reason to wait on him to do so. If you find me a wife, at least I'll have control over the final choice and will get married on my own terms, not his."

Grace had to stifle a groan and the urge to smack her own forehead. She should have expected this. Amir was far too princely to let another man choose his wife. Now that he'd been given a reprieve, rather than wait for his father to exert control again, he would preempt the king by acting on his own. She understood the reasoning, respected it even, but no way in the world was she going to help him.

That was simply asking too much.

His dark chocolate eyes widened almost comically. "What do you mean no?" His shock at her refusal was so blatant, she could feel it like a physical presence between them.

"I mean that if you want to find a wife," she said very slowly and very firmly, "you'll have to do it on your own."

The shock melted under his obvious discontent. "Don't be ridiculous. I can't make this kind of choice without your input."

Her body jerked as if the words were knives directed at her heart rather than the backhanded compliment Amir intended them to be. "I'm not being anything of the sort. I'm your personal assistant, not a matchmaker. Finding wives is not even remotely in my job description."

"That's exactly right. Your title is personal assistant, not administrative assistant, because you help me with more than just business."

"The selection of a wife is way too personal."

"No, it isn't. You've picked out gifts for my companions, how is this any different?"

"How can you ask me that?" She loved this man more than her own life, but sometimes he was so dense she was tempted to question the obscenely high IQ level he was purported to have.

Amir leaned his hip against her desk and crossed his arms, a sure sign he was settling in for the siege. "We're just arguing in circles here, Grace. I need your help."

It hurt enough to love him like she did and know there was no chance between the two of them, but to be forced to find a woman to hold the place she wanted more than anything? That was too much. Much, much too much.

"Come on, Grace. Don't let me down now. I'll make it worth your while."

That was all she needed, the promise of a bonus for doing the one thing she never, ever, ever—not in a million years—wanted to do.

Before he could continue the argument, the phone rang and Grace leapt for it like a drowning victim going for a lifeline. When she managed to drag the call out past a minute, Amir's natural impatience got the better of him and he pushed away from her desk.

The look he gave her over his shoulder said he wasn't finished with their discussion.

Amir paced his office. What was the matter with Grace? She'd been acting strangely ever since his father had insisted he marry. At first he'd thought it was because she was worried she'd lose her job when he took a wife, but he'd assured her the opposite was true. He couldn't imagine trying to function without his insightful and efficient PA.

She'd continued to act oddly and had only settled down in the last couple of weeks—since the marriage plans with Princess Lina had fallen through.

Try as he might though, he didn't understand why Grace was balking at finding him a wife. She didn't approve of his lifestyle any more than his father did. She'd made that clear enough, though she'd never gone as far as the king and suggested Amir resort to marriage.

He would think she'd want input into choosing the woman that would play a key role in her life. As his PA, Grace would no doubt find herself conferring with the woman Amir married in order to arrange schedules and the like. In fact, he would expect her to help select his spouse's personal assistant so the two would work together seamlessly.

Grace had to know this wasn't something he wanted, or even felt qualified, to do alone. She understood what he needed, often before he did. She would be able to find the best candidates to fill the role to complement his life.

He wasn't looking for love, but he didn't want a wife who didn't fit in with the lifestyle he was most comfortable living. Grace understood the sheikh under the Western clothing. She understood how important his family and home were to him, even if he lived in Manhattan and reveled in his New York existence.

He thought of how she had looked when he first asked her. Stunned. Totally shocked, which actually surprised him. He would have thought she would have foreseen this move on his part. She was usually much better at anticipating his actions.

She knew he didn't want his father controlling his life, even if the older man was King of Zorha. If not now, then sometime in the future, his father would come back with another parentally approved bride. Amir's only choice was to get there first. And he would have sworn Grace would realize that.

He had half expected her to have a list of suitable candidates already compiled. This intransigent refusal to help was completely out of character for her. Not to mention unacceptable.

It didn't help that Grace was kind of cute when she was startled like that. It wasn't a look he saw often and, frankly, that was probably for the best. He couldn't afford to ruin the most important relationship with a female that he had in his life for sex.

His mother might be hurt to know he placed Grace above her—and everyone else—in importance, but there was no contest. His PA impacted his reality in both big and small ways on a daily basis. No one had more influence on his day-by-day existence than she did.

Unfortunately, she was not the type of woman he could have a fling with and then go back to his normal life. Or he would have scratched this particular itch a long time ago. And he wouldn't have ended up with Tisa, either, thus preventing the subsequent edict by his father. Regardless, he recognized that working together afterward would be impossible.

He refused to risk something as important as his relationship with his perfect-for-him personal assistant for something as ephemeral as sex.

The fact that his desire to experience that side of his dowdy assistant was getting stronger all the time only enhanced his certainty that finding a convenient wife was the best course of action for him. Which meant he had to convince Grace to help him.

They both needed the protection. Because he knew that Grace would be far too easy to persuade into his bed. She watched him with an innocent hunger that had caused him to hide more than one hard-on behind his desk. He'd long since stopped questioning why a woman so unaware of—and poor at—showcasing her feminine attributes would affect him this way. He simply accepted that he craved pulling her long, curly mop from its tight bun and running his fingers through the red silk.

He also wanted to expose and taste the expanse of her alluring skin…the light dusting of freckles looked like sweet spice on the untouched creaminess. Did those delectable little dots cover her whole body? Were her delicious-looking apple-shaped breasts adorned with the cinnamon-looking specks?

Damn it. He had to stop thinking like this or he was going to have to start taking midafternoon showers…of the cold variety.

... --This text refers to an out of print or unavailable edition of this title.