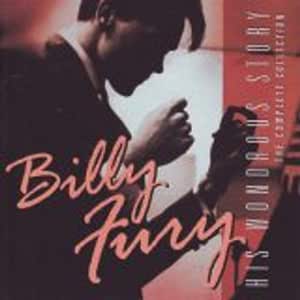 2008 collection of the pre-fab British Rock 'N' Roll star's singles released to coincide with the 25th Anniversary of his untimely death. Billy Fury was an early British Rock sensation. He equaled the Beatles' record of 24 hits in the '60s and spent 332 weeks on the charts without a chart topping single or album. His biggest hits include 'Jealousy' (#2 in Sept '61), 'Halfway to Paradise' (#3 in May '61) and 'Last Night Was Made for Love' (#3 in May '62). 29 tracks total. UMTV.

4.7 out of 5 stars
4.7 out of 5
187 global ratings
How are ratings calculated?
To calculate the overall star rating and percentage breakdown by star, we don’t use a simple average. Instead, our system considers things like how recent a review is and if the reviewer bought the item on Amazon. It also analyzes reviews to verify trustworthiness.
Top reviews

usa wendy
5.0 out of 5 stars Billy Fury was wondrous!
Reviewed in the United States on February 21, 2012
Verified Purchase
This CD was a fantastic purchase, both music wise and price wise. I saw Billy Fury perform on stage in Exeter, Devon, England when I was 11 years old. His singing and looks were wonderful. He is a friend of mine on Facebook now. So sad that he passed away when he was only 42 years of age. I am also a member of his wonderful Fan Club which is run by his dear mother, who is in her 90's. The fan club sent me another CD for a Christmas gift.
Read more
3 people found this helpful
Helpful
Comment Report abuse

Dana
5.0 out of 5 stars Wonderful memories
Reviewed in the United States on August 15, 2013
Verified Purchase
I can remember where I was and what I wore listening to these wonderful songs....it is a pleasant walk down the memory lane...
Read more
Helpful
Comment Report abuse

Cody Robert at Spokane
5.0 out of 5 stars WONDROUS BRITPOP 1959-82: DEFINITIVE AND CONCISE
Reviewed in the United States on March 6, 2019
Decca officially repackage their Billy Fury hit singles every decade or so, and this 2007 Universal anthology offers 29 tracks covering the primo Fury epoch 1959-66 and 1980-82 (absent only his Parlophone years and the singer’s invalidism). The emphasis is Billy’s blue-label Decca A-sides—mostly elaborately produced popster ballads and selected rockabilly sides, all confidently sung with Liverpudlian ex-docker conviction. The layout is roughly but not strictly chronological, and besides the signature hits we revisit with pleasure “Last night was made for love,” “In summer,” “Colette,” “I will,” “Maybe tomorrow,” “Because of love” and “That’s love.” These are regularly anthologized, but appended here are his final (Polydor) comeback singles, stunningly well sung: “Love or money,” “Devil or angel” and “Forget him,” plus his sizzling cover (with the Four Kestrels, and shrill PSYCHO strings) of Marty Robbins’ “Don’t worry.” These four are rare, highly collectable Furyana, not otherwise included in official compilations—including the excellent 1998 Deram twofer 40TH ANNIVERSARY ANTHOLOGY, which at a whopping 63 tracks is exhaustively strong on B-sides, flips and flops (plus the essential Fury rocker “Don’t knock upon my door”).

Hannah Tandy and Chris Eley compiled these choicest selections caringly, with Eley again as in 1998 contributing authoritative booklet notes. The digital transfers are direct from Decca’s Hampstead vaults and very clean, and this remains by far the best, most concise, single-disc Billy Fury compilation on the market, authorized and facilitated by the singer’s estate and memorial fund (which do not benefit from the shabbier Fury knockoffs and bootlegs). These 29 sides are wondrous throughout, and Anglophiles will find themselves playing this set—especially the four knockout-punch concluding tracks—even more regularly than the awkwardly sequenced anniversary anthology. Billy remains, down the decades, a wondrously gifted talent and superior recordmaker, comparable to his American counterpart and contemporary Eddie Cochran.

rbmusicman/and/movie-fan'
5.0 out of 5 stars 'A GREAT REFLECTION OF 'BILLY FURY'S' BEST LOVED SONGS'
Reviewed in the United Kingdom on May 12, 2014
Verified Purchase
'Billy Fury' was one of many great artist's that started gracing our Charts
in the late 50's.
'Billy' did have a very commercial vocal ability which brought him quite a
loyal following among the music fans of the day, leading to a run of twenty
six Top 40 hits between 1959 -1965.
The first of his 45's I purchased was way back in 62' that was 'Last Night
was Made For Love'
I did have a CD or two of his, however when glancing at this CD I began
to realize that there were several of his well known releases I just didn't
have, so I have added this to my music collection.
He really did have an impressive run in the U.K charts between the six
year period mentioned, though he never quite topped the chart, of his Twenty
Six Top 40 entries nineteen were in fact Top 20 successes, and Ten of those
peaked in the Top 10 those being - 'Colette' (Chart 9 '1959) 'Halfway To
Paradise' (Chart 3 '1961') 'Jealousy' (Chart 2 '1961') 'I'll Never Find Another
You' (Chart 5 '1961) 'Last Night Was Made For Love' (Chart 4 '1962) 'Once
Upon A Dream' (Chart 7 '1962') 'Like I've Never Been Gone' (Chart 3 '1963')
'When Will you say I Love You' (Chart 3 '1963') 'In Summer' (Chart 5 '1963')
'It's Only Make Believe' (Which of course was a late fifties hit for 'Conway
Twitty) (Chart 10 '1964') and 'In Thoughts of You' (Chart 9 '1965) though he
continued to have a couple of lower order hits after 1965, he never repeated
his success of earlier times, though he did continue writing songs into the
early Eighties.
Sadly after years of struggling with illness 'Billy Fury' died January 28th 1983
he was only 42 years of age.
This album is a great reflection of his well known songs and does include all
the Top 10 hits I've mentioned along with several more of his Chart entries.

Paul Roper
5.0 out of 5 stars Wonderous indeed,
Reviewed in the United Kingdom on September 7, 2014
Verified Purchase
Sadly, billy fury was very underrated whilst he was alive and this collection of his best songs will show just how good a singer he really was.listen closely to his version of "it's only make believe" and you will sense the emotional feeling billy put into that song.As with several of the tracks on this collection,billy sang with a real depth of feeling which made him different to many other singers of his era.from his 1st hit to the last one ,just weeks before his untimely death,each one is a real gem.
Read more
7 people found this helpful
Report abuse

DeeDeeGy
5.0 out of 5 stars Brilliant
Reviewed in the United Kingdom on April 10, 2014
Verified Purchase
This is truly wondrous with all his greatest hits included and as the very interesting booklet tells you he really did have a wide range of singing styles. I loved him as an older child into teen years and still do now even though I hadn't listened to his music for a long time. If there is one small criticism it is that the 29 songs are listed from his most popular/biggest hit to the least popular so, for me, there are a few unknown ones at the end (still a good listen though) I would have preferred if they'd mixed them up a bit with the lesser known ones being interspersed between all the many hits. The booklet does give the order of popularity so you would still have had that. However that is a small point and I'd recommend this to anyone who likes to hear a good solid singer!
Read more
2 people found this helpful
Report abuse

cottonroy
5.0 out of 5 stars Great.
Reviewed in the United Kingdom on August 2, 2020
Verified Purchase
I haven’t received it yet but I was able to download it to my prime music. Great.
Read more
One person found this helpful
Report abuse

maygirl
4.0 out of 5 stars Wondrous Singer
Reviewed in the United Kingdom on March 9, 2016
Verified Purchase
Didn't know many of Billy's songs apart from Halfway to Paradise & A Wondrous Place until I saw a tribute show recently & order this CD after the show. On here 29 tracks which I'm still getting to know so far I love the two tracks already mentioned & I'd Never Find Another You; Like I've Never Been Gone & In Summer
makes me smile. Jealousy starts off the album in style & ends with Forget Him. Enjoying discovering Billy's music.
Read more
2 people found this helpful
Report abuse
See all reviews