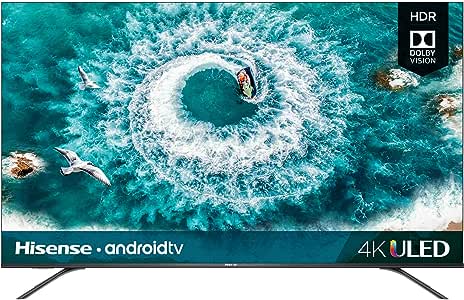 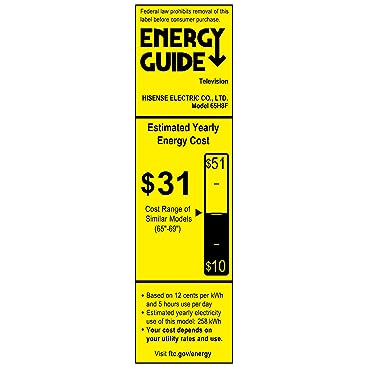 by Hisense
4.1 out of 5 stars 419 ratings
| 315 answered questions
Available from these sellers.

Up to 700 Nits Peak Brightness

Control the H8F with your voice. Plus, automated scene recognition adjusts picture and audio modes based on the genre of content you're watching, whether it's fast action, concert, news, etc.

With an input lag that’s as low as 15 milliseconds, you’ll enjoy fast-paced video games and stay ahead of your competition.

Enjoy more tabletop options for your TV. The H8F is designed with a total of four slots to choose from to insert the TV feet. This allows for more flexibility and space-saving. Available on the 55" and 65".

The Hisense h8f is the most advanced TV in its price class providing a picture with richer colors, more detail, better brightness, and smoother motion. For the first time, the h8 is powered by Hisense’s proprietary ULED technologies and hi-view engine. This combination works intuitively and continually to create backlight control, and picture quality enhancing and tuning algorithms to boost color, contrast, brightness and motion. Sit back and enjoy the ideal viewing experience—no matter what is on the screen. Say “goodbye” to boredom and “hello” to android TV, featuring more than 500, 000 movies and shows plus video streaming from Netflix, Hulu, YouTube and many more. Android TV comes with google assistant built-in so you can quickly find the latest blockbuster, check the score of the big game, or dim the lights—all without leaving what you are watching. The h8f makes sure the best of TV is at the tip of your finger or lips with google home compatible devices. Refresh rate: 60 kHz.

4.1 out of 5 stars
4.1 out of 5
419 customer ratings
How does Amazon calculate star ratings?
Amazon calculates a product’s star ratings based on a machine learned model instead of a raw data average. The model takes into account factors including the age of a rating, whether the ratings are from verified purchasers, and factors that establish reviewer trustworthiness.

L. Rost
5.0 out of 5 stars Great value for the price.
Reviewed in the United States on May 13, 2019
Size: 65-inchVerified Purchase
I bought the Hisense 65H8F model, I have only had it for one day. And so far I am loving it, it does have a free bad things about it, but overall it went above my expectations. I have always owned Samsung or LG TVs but decided to give Hisense a go for to bring able to have Android TV for cheap. Not my peeps and cons are based on the hardware not the software as it can be updated fairly easily unlike traditional smart TVs.

Now a free weird about how I used it tonight. Loaded up all my favorite Google apps, YouTube tv, youtube, Google play movies, along with hbo, steam link.

First off I didn't expect steam link to work so well. I have Google WiFi and it streamed the Witcher in 4K to my TV with no noticable lag, tried a lot of other action games as well such as gungeon and Sine Mora, and battlefield 4. All played extremely well.

4k content played extremely well though I didn't not have an Ethernet cable plugged in, it loaded and buffered to 4k within about 30 seconds. This is due to only having an 80 mbps connection.

As above watched s8e3 the long night off hbo, the dark scenes we're clear and easy to see, watched it in broad day light with shares open on a 75° day with lots of sun. Again no issues at all.

Synced Google mini and Bluetooth controllers to tv, they all worked great.

Google Home has not been able to find my TV, but that may be my Google home, it's been dying for a few days and doesn't responded like the other ones in my house. With that, my bedroom Google mini could control the tv just fine, but still can't add to my Google home app.

I'll update again in 30 days. If my cons don't steer you away you will love this tv, and love the price you paid even more!

Update: So bit longer than 30 days, still loving the TV, it is fantastic I have told many people about it and they too have ordered it. No its not the best on the market, but its amazing for what it costs. Everything i said still holds true. Fantastic product.

Roman
3.0 out of 5 stars Seems unfinished
Reviewed in the United States on June 8, 2019
Size: 55-inchVerified Purchase
I couldn't find any reviews online except for sneakily sponsored Youtube "reviews" at the time I bought this so I'm writing this to try to help others out. This tv physically looks very nice and is very light, which is always good for setup. You can make the stand narrow to fit on smaller tables which is a brilliant idea.

The panel itself seems to be very good. It has wide color gamut, has HDR, and gets really bright. The screen seemed a little dirty. I could notice some annoying vertical lines when looking at a uniform color screen - like a sky when playing video games - but this may have been just my particular unit. Overall, they did an amazing job with the panel at this price.

However, the software and firmware all just seemed very unfinished. The Android home screen personally is just too much for me. I don't need all that when I turn my TV on. My old Roku TV seems like such a better tv interface. It is simple and easy. Android TV has rows and rows of different stuff and the input icon seems like an afterthought.

The picture, while good, seems like it needs to be highly adjusted no matter what you're using it for. The motion thing seems to always be turned on, youtube videos looked really jittery, and colors just always seemed to be off. I bought this primarily for Xbox One X HDR gaming, and I spent a lot of time just trying to get the picture right. The bad thing about this is that the settings menu is extremely complicated. You never know if you're adjusting for just that mode or other modes, the menus are not intuitive, and the setting you want is probably greyed out because of the mode you happen to be in.

The sound is very good for a TV and the theater effect is better than I expected - which was not much. But occasionally the TV just wouldn't output and sound and I'd have to go back to the home screen and then back to the input to get it working again.

The dealbreaker for me was the Game Mode (the mode that minimizes input lag from the controller) seems to be broken as of this writing. With it on the color banding was atrocious - definitely in HDR gaming and probably in SDR too. Areas of the screen that should gradually go from dark to light (like a dark sky or dark hallway shadow) instead transition in ugly bands of color. If I changed the setting to a normal HDR mode everything would be fine but the input lag would be noticeably high making it impossible to play. (I thought I was going crazy and tried every adjustment on my Xbox and TV to no avail - I finally found one owner on a forum stating the same problem which made me realize it was not just me.) Since the picture looks fine on non-game mode I'm assuming this is a software problem which can be fixed by Hisense in the future.

Using this primarily as a gaming TV, I am now going to have to contact Amazon and try to return it, which should be fun with an item this large. Luckily Amazon usually has amazing customer service.

To conclude, this TV is exactly what you should expect for the price. Amazing they were able to fit so much in for $500, but everything seems just a little off and rushed, like a few corners were cut everywhere. It does seem like almost all of my criticisms can be solved with software updates though, so my review may become outdated in the future. One comparison to help: my old TV was a TCL 55P605/P607. It lacks some of the features of this one, but is overall just a much, much better put together machine. The home screen is simple and the picture settings all just seem to work right out of the box.
Read more
148 people found this helpful
Helpful
Comment Report abuse

Spencer H.
1.0 out of 5 stars HORRIBLE. DO NOT BUY.
Reviewed in the United States on July 12, 2019
Size: 50-inchVerified Purchase
I literally don't even understand how this is listed as 4k, 240hz and has even one positive review. It's visibly blurry around text, menus, much less video. It's laggy like I've never seen. Literally tryingt o watch ANYTHING (streaming or not) is horrible lag. I didn't even know that could happen. It's absolutely NOT 240hz, especially at 4K. When I went to plug in the HDMI I discovered every port is labelled 4k 60hz. I thought maybe there was a menu item somewhere to switch it to at least 120hz - nope. The lighting is extremely uneven. The AndroidOS forces you to sign into Netflix even when trying to cast from your phone - which is so stupid - totally defeats the purpose of casting. Just an all around horrible product. I don't understand!
Read more
105 people found this helpful
Helpful
Comment Report abuse

Goosifer2.0
5.0 out of 5 stars Great TV, Tremendous Value
Reviewed in the United States on May 16, 2019
Size: 65-inchVerified Purchase
This TV has really impressed me. It looks great, appreciated the two options for the TV stand it comes with. Picture quality has been awesome. Love the Android TV operating system with Google Assistant on the remote - I say what I want and a moment later it takes me there, really great. Nice sound with the built-in speakers. Again, this is a wonderful TV and I think exceptional value, too.
Read more
53 people found this helpful
Helpful
Comment Report abuse

Jeffery L
5.0 out of 5 stars seems to be good value
Reviewed in the United States on May 13, 2019
Size: 55-inchVerified Purchase
I have no idea how this compares to any other specific brand of TV in this price range, but the picture quality looks good and the user interfaces are fairly intuitive. It is just mind boggling that you can get a 55 inch TV that looks this good delivered to your door for $500. The modern world is amazing.
Read more
53 people found this helpful
Helpful
Comment Report abuse
See all reviews from the United States