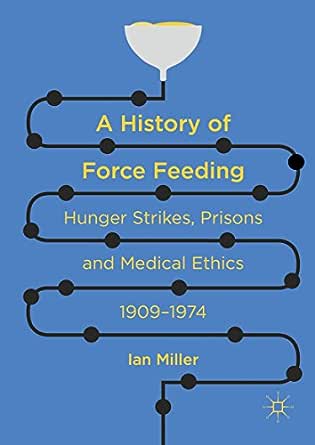 Flip to back Flip to front
Audible Sample Playing... Paused   You are listening to a sample of the Audible narration for this Kindle book.
Learn more
ISBN-13: 978-3319311128
ISBN-10: 3319311123
Why is ISBN important?
ISBN
This bar-code number lets you verify that you're getting exactly the right version or edition of a book. The 13-digit and 10-digit formats both work.

“Ian Miller has produced a meticulously researched history of hunger striking in Britain and Ireland.  This book covers the extent and nature of hunger striking by convicted persons in prisons as well as the more dramatic use of it in political struggles... Out of this comes a fascinating account of individuals and movements who embraced hunger striking throughout the last hundred years.  The book is an excellent forensic examination of the medical and ethical issues hunger striking raises.” (Greta Jones, University of Ulster, UK)

“Ian Miller has written a groundbreaking book. It takes the reader beyond the standard studies of hunger strikes adding new perspectives to our understanding of this controversial issue.” (Thomas Hennessey, Canterbury Christ Church University, UK)

“Ian Miller has written a ground breaking book. It takes the reader beyond the standard studies of hunger strikes adding new perspectives to our understanding of this controversial issue.” (Thomas Hennessey, Canterbury Christ Church University, UK)

This book is the first monograph-length study of the force-feeding of hunger strikers in English, Irish and Northern Irish prisons. It examines ethical debates that arose throughout the twentieth century when governments authorised the force-feeding of imprisoned suffragettes, Irish republicans and convict prisoners. It also explores the fraught role of prison doctors called upon to perform the procedure. Since the Home Office first authorised force-feeding in 1909, a number of questions have been raised about the procedure. Is force-feeding safe? Can it kill? Are doctors who feed prisoners against their will abandoning the medical ethical norms of their profession? And do state bodies use prison doctors to help tackle political dissidence at times of political crisis?

This book is Open Access under a CC BY license.

Ian Miller is a Wellcome Trust Research Fellow at the Centre for the History of Medicine in Ireland, Ulster University. He is the author of A Modern History of the Stomach: Gastric Illness, Medicine and British Society, 1800-1950, Reforming Food in Post-Famine Ireland: Medicine, Science and Improvement, 1845-1922 and Water: A Global History (2015).