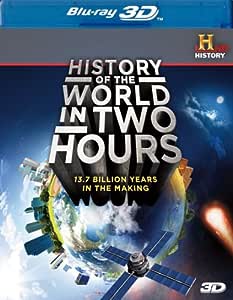 History of the World in Two Hours [Blu-ray]

Various (Actor), The History Channel (Director) Rated:
NR
Format: Blu-ray
4.4 out of 5 stars 237 ratings
Available at a lower price from other sellers that may not offer free Prime shipping.

Did you know that 1% of the white noise you see on your television is actually background radiation from the Big Bang? From the formation of the earth and the emergence of life, to the advance of man and the growth of civilization, the CGI-driven special HISTORY OF THE WORLD IN TWO HOURS offers viewers a rapid-fire view of 14 billion years of history - an epic story that reveals surprising connections to our daily lives, for the first time in majestic 3D!

The title is catchy, but if you take away the commercials, History of the World in Two Hours actually weighs in at a little under 90 minutes. Not a lot of time to present what's billed as "the whole story" of the past 13.7 billion years, but while this documentary is predictably short on detail, it's still pretty comprehensive. Proceeding from the Big Bang, the event that started it all (in the process creating space, time, and gravity), we rapidly review through the major developments of the universe's first six or eight billion years, helped along by a variety of talking heads and a kinetic parade of very deft visual effects. Those developments include the first atoms and elements such as hydrogen, helium, and iron, the birth of stars, the formation of the Earth (and, just as important, the Moon), the earliest signs of life, the evolution of plants, the emergence on land of oxygen-breathing amphibians, the separation of Pangaea into different continents, the age of dinosaurs, and so on… all of it leading to the appearance of primate-like hominids some seven billion years ago. About half of the program is devoted to human history, which, though it occupies but a small fraction of those 13.7 billion years, has seen our species disperse across the globe, harness fire, learn to use tools and language, invent farming, learn to think symbolically as well as practically, fight wars, foster massive empires, become largely monotheistic, transform civilization with the Industrial Revolution (leading to electricity, flight, the automobile, and so much more)…. It's exhausting merely to recount it, let alone stay focused as all of this information comes rushing by. It's also true that with little or no time to back up all the facts and figures offered here, those who remain skeptical of science and hew to a more "creationist" viewpoint are unlikely to have their opinions swayed. Still, History of the World in Two Hours is an excellent jumping off point for a more thorough examination of this enormous topic. --Sam Graham