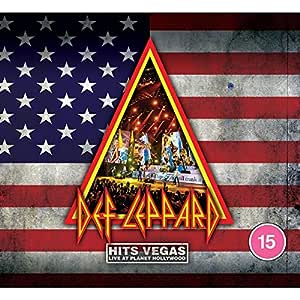 Def Leppard (Artist) Format: Vinyl
3.8 out of 5 stars 10 ratings
See all 2 formats and editions Hide other formats and editions
Pre-order Price Guarantee. Details
Includes FREE MP3 version of this album.&nbspProvided by Amazon Digital Services LLC. Terms and Conditions. Does not apply to gift orders.&nbspComplete your purchase to save the MP3 version to your music library.

Hits Vegas, Live At Planet Hollywood is a 28-song deep dive into not only their greatest hits, but rarities such as "Too Late For Love," "Billy's Got A Gun," "Slang" and "Promises." Highlights Def Leppard's versatility, and presents a livewire stage show with two stages and video walls, punctuated with intimate, acoustic renditions of rarely performed songs "Let Me Be The One," "We Belong," "Have You Ever Needed Someone So Bad," and "Two Steps Behind." Limited 3LP on translucent blue vinyl.

3.8 out of 5 stars
3.8 out of 5
10 global ratings
How are ratings calculated?
To calculate the overall star rating and percentage breakdown by star, we don’t use a simple average. Instead, our system considers things like how recent a review is and if the reviewer bought the item on Amazon. It also analyzes reviews to verify trustworthiness.
Top reviews

Rex Smetzer
5.0 out of 5 stars A must have Def Leppard album
Reviewed in the United States on May 31, 2020
I know the band have released some live albums in the past and I was hesitant to purchase this album. I know Viva Vegas was released in 2013, but after looking at how many songs there are on this release and some of the deep cuts on it, I was convinced to buy it. This live album blows Viva Vegas away!!!
I love the deep cuts on this album- We Belong, Action to name a couple. There is a couple of acoustic songs also. It's just a great live overview of the entire Def Leppard catalog. I would definitely recommend this album to any Def Leppard fan!!!!!!

nobodyfromnowhere
2.0 out of 5 stars Def Leppard Live Again: Hands in the Air
Reviewed in the United States on June 1, 2020
Ok so I really like Def Leppard. But it seems anymore to just be live album after live album with no real discernible difference. The best I get out of it is counting how many times Joe Elliott says ‘come on everybody ‘HANDS IN THE AIR’. OK we get it.
Read more
Helpful
Comment Report abuse
See all reviews

S. Lornie
5.0 out of 5 stars Better than the CD!
Reviewed in the United Kingdom on October 20, 2020
Verified Purchase
Early this year (2020), England's Def Leppard released the tremendous live box-set London To Vegas. The collection featured a Hysteria heavy performance from London and a extensive 2+ hour performance from Las Vegas. Both shows were released individually on CD, Vinyl and on video. I unfortunately missed the released of Hits Vegas on vinyl and jumped on the opportunity to pick it up on blue vinyl for an absolute steal, roughly £30.

This blue vinyl version of Hits Vegas was released in October through Eagle Records. It's held together in a nice double gatefold with the three LPs being housed in very colourful sleeves featuring the track list etc. The album features an awfully impressive set list, twenty eight songs in total. These are spread across the previously mentioned three discs and all of them are printed on reasonable heavy vinyl.

If you've bought the CD/Bluray copies of this performance already. You'll know what to expect. The band sound fantastic throughout. The tones of the guitars are as heavy as they are buttery smooth and the drumming from one armed legend Rick Allen are fantastic. He never missed a beat. Joe Elliot puts on a respectful performance. Some of the early songs are clearly hard for him to pull off but he does his best and you can hear every bit of effort from the frontman.

In typical Def Leppard fashion, the set list has songs from Pyromania and Hysteria littered through out. That means we get more copies of set list mainstays like Pour Some Sugar On Me, Love Bites, Armageddon It, Photograph, Rock of Ages etc. There's also the usual suspects like Let's Get Rock, Have You Ever Needed Someone So Bad from Adrenalize and their awesome cover of Sweet's Action. The real gems from this performance is the likes of the set opener, Die Hard The Hunter, Euphoria highlights Paper Sun and Promises as well as the very underrated Now from X. These oddities mixed with a great selection of fan favourites are what makes this album so good.

The modern production and engineering really gives some of these songs a needed kick up the bottom, especially on vinyl. Hearing this LP compared to the CD is quite a contrast. There's no compression and all the loudness is gone. It's a very smooth listening experience and sounds magnificent cranked up. The vinyl itself sounds very smooth and had no surface noise whatsoever. It's a very good print of a very good album.

If you're a NWOBHM fan or love a bit of Def Leppard, this is very much worth picking up. The original CD/Bluray releases were excellent but having this performance on vinyl, sounding as good as it does makes it a must buy for fans of the band. I think this £30 VERY well spent.