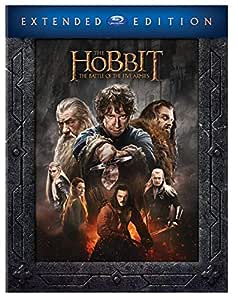 The Hobbit: Battle of the Five Armies (Extended Edition) (Blu-ray)

Ian McKellen (Actor), Martin Freeman (Actor) Rated:
R
Format: Blu-ray
4.9 out of 5 stars 4,304 ratings
Amazon's Choice recommends highly rated and well-priced products.
Amazon's Choice for "the hobbit the battle of the five armies"
See More
Available at a lower price from other sellers that may not offer free Prime shipping.

Hobbit, The: Battle of the Five Armies (Extended Edition) (Blu-ray)

Academy Award-winning filmmaker Peter Jackson returns to Middle-earth with the final of three films based on J.R.R. Tolkien's enduring masterpiece. Set in Middle-earth 60 years before the epic Lord of the Rings trilogy, the adventure follows the journey of Bilbo Baggins, who is swept into an epic quest to reclaim the lost Dwarf Kingdom from the fearsome dragon Smaug. Approached out of the blue by the wizard Gandalf, Bilbo finds himself joining a company of dwarves on a journey into wild, treacherous lands swarming with beasts of every ilk. After reaching Erebor and encountering the dragon Smaug, Five Armies assemble for an epic battle that could decide the future of all in Middle-earth. The Extended Edition film is 20 minutes longer with new and extended scenes not seen in the theatrical release.

4.9 out of 5 stars
4.9 out of 5
4,304 global ratings
How are ratings calculated?
To calculate the overall star rating and percentage breakdown by star, we don’t use a simple average. Instead, our system considers things like how recent a review is and if the reviewer bought the item on Amazon. It also analyzes reviews to verify trustworthiness.

Cantanopy
5.0 out of 5 stars Dwarves vs. Humans vs. Elves vs. Orcs, Trolls and Goblins. Ah, And a killing dragon. Where is the popcorn!
Reviewed in the United States on January 24, 2017
Verified Purchase
Ah, the final part of the Hobbit trilogy. It is also the shortest Extended version of the three movies (An Unexpected Journey and The Desolation of Smaug) but the 20 minutes extra running time are once again edited so perfectly into the movie that you sometimes notice that something has been added.

The Battle of the Five Armies again takes a lot of liberty in the adaptation of the book to the screen. Which - once again - might upset the story purists but that has been done well. The story-line wraps up nicely and by the end of the 2 hours and 43 minutes you can roll right on through watching all the Lord of the Rings movies.

But, there is also a little bit of the problem that I had with this movie. There clearly has been the idea with the studios to outdo the Lord of the Ring in scale. Which makes no real sense. The Lord of the Rings is the build-up to where the world goes to war. But somehow, the war that we get in The Battle of the Five Armies features armies that look larger than even the battle at Gondor, and they dwarf the armies of the Orcs and the Uruks for Helm's Deep in The Two Towers.
And it does look awesome once again, but because of this, I would advise for a week or so between to sit-throughs of both trilogy; simply not to compare them to each other in too much detail.

Just like the book, this final part of the trilogy is far less a fantasy movie but rather a war movie. It is a great movie, but - just like the book (again) - it feels a bit like an sequel-story building upon the fantasy story that covers the first two movies. I think Peter Jackson did very well to have ended the 'Desolation of Smaug' where it did, and bring the rest of that part of the book to this last movie to not make it a huge difference in movie styles.

The acting is great again, the action sequences are beautifully filmed, and there is again a lot of stunning scenery to be enjoyed. The extra 20 minutes exists mainly of a lot of extra - fantastic - gorey shots during the war. You want to know the 10 best ways to kill an Orc? Well, this is the movie for you.

Enjoy this one as the conclusion of The Hobbit trilogy.

PsycheTop Contributor: Doctor Who
5.0 out of 5 stars i know this should have been one film, but...
Reviewed in the United States on June 23, 2016
Verified Purchase
I know this should have been one movie, but... I can't help but enjoy these movies and say what you will, but so much work and effort went into these films, and I feel as if that is often forgotten. also for me to hate these films is for me to be a bit of a hypocrite, bc people get mad about what was put in, but they forget that the LOTR movies had stuff put in it from appendices and other books of Tolkien's as well. the hobbit movies just wished to include a lot of other stuff from Tolkien's other works, and it gave background. for example, i'm not ashamed to admit this, but the first hobbit movie helped me put into perspective and comprehension the council of Elrond chapter in the Fellowship of the ring book. there was so much in that chapter that it is hard to put into perspective, but an unexpected journey really helped me understand it all better. also there was a lot of good acting, some great scenes and some lovely directing in a great deal of places. and that stuff that was added do not at all ruin the movie for me. people get angry about legolas being there, but he did technically exist in mirkwood at the time of the hobbit, and the hobbit book was Tolkien's first outing when it came to publishing and he was still building his world. he came up with legolas after he published the hobbit, but he did exist in that time frame. as for tauriel, like with legolas, people are spending too much energy with their hate on that, for when they entered mirkwood, they were taken prisoner by elves, and all those elves were individuals who just go unnamed. in writing, that is called a blindspot, where you can take a character that goes nameless, give them a name and give them a more prominent place for development. also, this was done in LOTR films, where characters were taken from the multitude, given a name and given a cool role, i.e. Lurtz, who was the uruk-hai who led the force that attacked borimor at the end of LOTR. He's not really in the books, but since there was an uruk-hai host that attacked the company, there easily could have been a leader who was like lurtz. blindspots have the right to be filled in sometimes for dynamic storytelling purposes. if you hate tauriel and legolas being there, then cool, but you can't hate them and then say its ok in LOTR, bc that's a double standard. I know these films are not as good as the LOTR movies, but there is something really fun and enjoyable about them! I know people hate them, but I admit that I cannot be one of them. while I wish the cgi was better handled and man I hate 48 fps, I still find a lot of good elements to these films and think they are still great.
Read more
24 people found this helpful
Helpful
Comment Report abuse

Underground RebornTop Contributor: Star Wars
4.0 out of 5 stars There and Back Again (Part 3 of 3)
Reviewed in the United States on February 9, 2017
Verified Purchase
We have finally reached the end of the journey to the cinematic Middle Earth. While this second trilogy came with a lot of controversy (particularly the three film split), I for one was happy with the outcome. The Hobbit is my favorite book of all time and for the purposes of film making I was happy with how this was represented. While I do agree that splitting such a small book into three films with some added fan fiction was a bit long winded. I feel that this shouldn't have been done any other way.

In 'The Battle of The Five Armies' we get to see more of the detail of the battle which we really don't tackle much in the book itself as well as some of the back story into Angmar which I enjoyed. I also loved seeing Billy Connolly as Dane. I thought he was very funny. The film also had a lot more emotion than I thought it would and I loved how the ending takes us right into the The Lord of The Rings. With the style that this new trilogy was done, it actually makes more sense to watch The Lord of The Rings before you tackle The Hobbit.

Peter Jackson truly did this legendary work justice. Tolkien's work was a true labor of love for the material and cinema and I am very happy to have experienced it all.
Read more
10 people found this helpful
Helpful
Comment Report abuse
See all reviews

efg
5.0 out of 5 stars Epic Atmosphere
Reviewed in the United Kingdom on October 14, 2016
Verified Purchase
A must have if you are a fan of Peter Jackson's interpretation of Tolkiens masterpieces.
Some flaws due to the commercialization of the stories in order to appeal to wider audiences, but the essence is intact and the story telling survives the process.
Read more
Report abuse

Amazon Customer
5.0 out of 5 stars fantastic.
Reviewed in the United Kingdom on May 18, 2020
Verified Purchase
Arrived 3 weeks earlier than it said. a fantastic film. the extended edition scenes really give you a wider view on the scale of this film including a lot of scenes that truly are a must see for any hobbit fan.
Read more
Report abuse

G. Malone
5.0 out of 5 stars For United States customers
Reviewed in the United Kingdom on December 17, 2017
Verified Purchase
Thanks to Amazon UK for offering the 3D version that will play on our players here in the United States. For whatever reason, Disney is not releasing most 3D titles stateside. I recently ordered Ant Man and Cars3 as well and they play on my player as well.
Read more
Report abuse

Page 1 of 1 Start overPage 1 of 1
This shopping feature will continue to load items when the Enter key is pressed. In order to navigate out of this carousel please use your heading shortcut key to navigate to the next or previous heading.
Back
Next
Pages with related products. See and discover other items: cate blanchett movies, 3d movies, new 3d movies, peter jackson, the hobbit 3