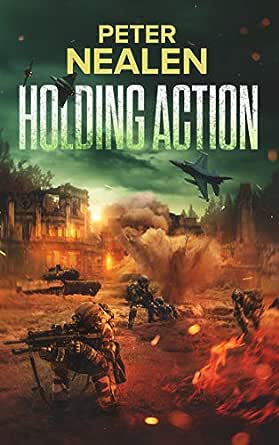 You've subscribed to Maelstrom Rising! We will preorder your items within 24 hours of when they become available. When new books are released, we'll charge your default payment method for the lowest price available during the pre-order period.
Update your device or payment method, cancel individual pre-orders or your subscription at
Your Memberships & Subscriptions
There was an error. We were unable to process your subscription due to an error. Please refresh and try again. 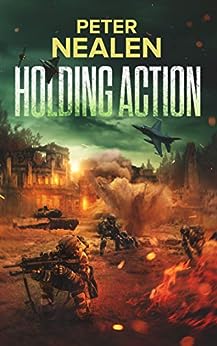 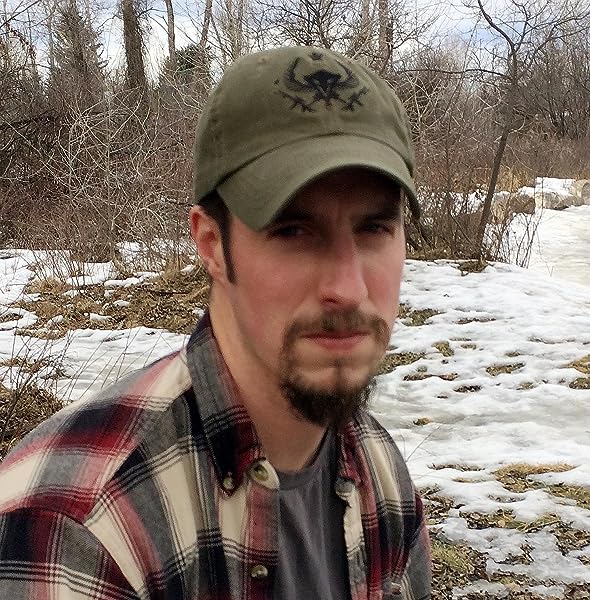 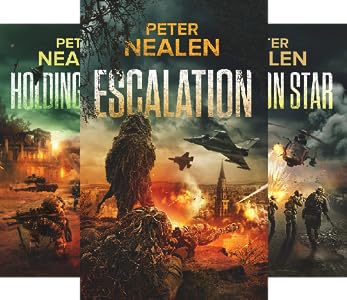 Steven Hildreth, Jr.
5.0 out of 5 stars Kinetic, well-written, and highly recommended speculative war fiction
Reviewed in the United States on March 11, 2020
Verified Purchase
HOLDING ACTION is the second novel in former Recon Marine Peter Nealen's MAELSTROM RISING series, which focuses on a near-future scenario where the Chinese have fomented great unrest in the United States & launched a massive attack on the American communication grids, the French and Germans have formed a totalitarian European government and attacked American peacekeeping forces in Europe, and the Russians are looking to seize advantage of the chaos. In the midst of all of this are the Triarii, a militia dedicated to being the stopgap where the fractured US government is incapable of executing its duties.

Taking place about a month after the events of ESCALATION, HOLDING ACTION sees Matt Bowen and his Grex Luporum team in Poland, working alongside both American and Polish forces, with a fresh Congressional letter of marque and reprisal in hand. The European Defense Council is attempting to bring Poland to its knees by shutting off their primary supply port, and the Triarii and their (sometimes reluctant) allies race to counter the move, both for their own survival and the survival of the Polish people.

Nealen does two things very well in this book. The first is that, like in ESCALATION, he has a tight, gripping, and congruent canon that spells out how things came to be and the second and third order consequences of those actions. The second is painting a picture of an American empire in decay, showing what kind of battlefield horrors troops will face when they lose air superiority and the enemy has the same or greater technological assets as the United States does. Not only is this realistic, it makes for a more harrowing narrative.

Another thing to be commended is showing the effects of post-traumatic stress on combatants, especially when they haven't had a chance to rotate out and have continued the fight, often on very little sleep and limited supplies.

As always, the action is kinetic, and the reader can rest assured that what they're reading is a glimpse into how combat is, given Nealen's tactical background. His action scenes have always been very well written, and he only continues to hone his art with every novel he publishes.

A well-written tale, and highly recommended for fans of war fiction.

Gysgt Rick Roy USMC Ret.
5.0 out of 5 stars First person singular!! Great writing!
Reviewed in the United States on July 22, 2019
Verified Purchase
Excellent characters! Know them all. Have served with each of them at different times! Excellent action, very strong plot lines. Always knew we'd be in a fight with something like the EDC.

For Pete: excellent work getting Matt into Church! Have knowN you are Catholic from you other writings, THANKS for cleaning up the vernacular,
After 20 years as a Marine, it really does not slow me down, but I too have found Christ, besides your too good an author to need it!
THANKS AGAIN

Sensei Mike
5.0 out of 5 stars As good as the first in series for the action, with better differentiation of the main characters
Reviewed in the United States on August 27, 2019
Verified Purchase
The only negative of the first book was that the action happened to fast, I had to go back and re-read to find out who did what sometimes. These books are not boring reads, but you need to establish mannerisms that differentiate who does what. With the second book that minor problem is solved. You have a clearer sense of the characters, while the action, if anything, goes into higher gear. :) Now, they're in Poland facing tougher opponents and challenges. I am really looking forward to book 3. :) This series made my "must read" list.
Read more
One person found this helpful
Helpful
Comment Report abuse

greentimber
5.0 out of 5 stars Read it all
Reviewed in the United States on January 9, 2020
Verified Purchase
If Nealen writes a military fiction story, I read it. He's never disappointed and I look forward to the next one. The Praetorians are still my favorite, but Branningan's crew is great, too. The Maelstrom Rising series is more conventionally focused, but still a great series and I can tell that there are some fascinating things coming within the story.
Read more
Helpful
Comment Report abuse

Alan M. Kumashiro
5.0 out of 5 stars Hurry Up and Wait Does Not Apply
Reviewed in the United States on July 20, 2020
Verified Purchase
Fast Read. The writing style is taut, intelligent, edge of the seat, a real page turner. Author avoids extensive tangents of questionable worth to the storyline. and yet this installment is just a small part of the bigger picture told from he point of view of the man on the ground. Few have written a story of American forces behind the eight ball.
Read more
Helpful
Comment Report abuse

Greg
5.0 out of 5 stars Love this series!
Reviewed in the United States on July 17, 2019
Verified Purchase
This book and the first one did not disappoint. Just as good if not a tad better than the American Praetorian series. Very detailed and catches how small units operate interact with each other. I have yet to read a bad novel from this author.
Read more
Helpful
Comment Report abuse

Randall long
4.0 out of 5 stars Good read
Reviewed in the United States on July 19, 2019
Verified Purchase
Nice action packed thriller. I have to wonder how much of the lay out of the town and cuts was researched and how much was made up. All and all a good book and i look forward to the next one.
Read more
One person found this helpful
Helpful
Comment Report abuse

Kindle Customer
5.0 out of 5 stars Onward
Reviewed in the United States on March 30, 2020
Verified Purchase
The battles continue and the action is non-stop. You feel you are right there in the middle of things and experiencing what it's like in close quarters combat. Ready for book 3.
Read more
Helpful
Comment Report abuse
See all reviews

peter reed
4.0 out of 5 stars Better than the first book .... but
Reviewed in Australia on August 26, 2019
Verified Purchase
This, the second of the series, is an easier read than the first but still has issues, minor issues but issues nonetheless.
This story is gathering momentum and some times this momentum can leave the reader trying to figure out who is doing what and with whom.
As this story builds up pace (and there is a LOT of pace) the author sometimes appears to get caught up in the description which, if you are a wizard at military jargon and ‘speak’, may be easier than a mug, like me, who wants to disappear into the story. This being said this is still a great read but it is also an education and, sometimes, I (in particular) struggle to keep up - something like some of the characters who are told ‘get on board or die’.
If you want your action in continuous instalments then this page turner is for you as it is a very good read.
Thank you Mr Nealan - both for the escape and the, rapid fire, education.
Read more
Report abuse

PeterM Australia
5.0 out of 5 stars It just gets better
Reviewed in Australia on September 6, 2020
Verified Purchase
This second book is just as good - or better - than book 1. The taut story line allied with believable and thought-provoking global scenarios make it impossible to put down. I love the evident military knowledge the author uses to really good effect, tied in with plausible and worrying political developments. His characters are strongly in mind’s view throughout and are completely right. I loved it and will download book 3 right now. Well done indeed to this talented author.
Read more
Report abuse
See all reviews