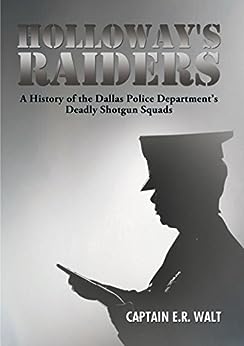 Yolanda Moses
5.0 out of 5 stars Great Read
Reviewed in the United States on October 1, 2016
Verified Purchase
As a former member of Holloway's A Unit, this book brings back many memories. It covers a lot of history that as a 30 year veteran of the department, I did not know. The book is an easy read and flows well. I would recommend it to anyone who is interested in law enforcement and especially anyone with experience with the Dallas PD. Now I have to find his first book about the Hall St. Shootout.
Read more
11 people found this helpful
Helpful
Report abuse

David McDowell
5.0 out of 5 stars True stories of a legendary time in Dallas PD.
Reviewed in the United States on December 15, 2016
Verified Purchase
Excellent book.

As a former Dallas PD officer myself, I was eager to hear the stories of the legendary Shotgun Squads. It turns out there wasn't nearly as much killing as I'd been told, but that's not surprising, as legends are always bigger around the campfire.

An example of "campfire" stories I'd been told about the Shotgun Squad: (Picture overweight elderly cop talking to eager rookies.) "Yep, them Shotgun Squads, they were the hot set up. Why they used to wipe out a couple of hijackers almost every weekend! They closed them down one year, because a couple of the guys were all pissed off at having to work on Christmas weekend, and when the hijacker showed his gun, they stepped out and said, 'Merry Christmas, mother------!', and blasted him! The clerk was traumatized and angry, so they shut the whole program down!" (Incidentally, thanks to the author for explaining the origin of Dallas' use of the term "hijackers" in referring to armed robbery suspects. I'd always wondered how that came about.)

The writing here was maybe a little bit dry, but this is essentially a chronicle, and the author was very careful to get accurate information, rather than just repeat old stories as they were told. I think this book is not only a good read, but a vital piece of historical record for Dallas P.D.
Read more
5 people found this helpful
Helpful
Report abuse

Richard Edelstein
5.0 out of 5 stars I WAS THERE
Reviewed in the United States on February 2, 2021
Verified Purchase
For Police Officers of the Dallas Police Department and their families this book is an interesting HISTORY lesson.A number of the officers I worked with and their stories are in this really easy to read accounting of one of the toughest details in the police department at the time. Officers of other departments will appreciate this look back into the beginning of the "Shotgun Squads".
Lt. HC Holloway was a bigger than life, tough, and demanding dedicated law enforcement officer and if you got sideways with him you sat through an armageddon of discipline.
Read more
Helpful
Report abuse

James Bryan
5.0 out of 5 stars Before PC
Reviewed in the United States on January 2, 2018
Verified Purchase
Eddie Walt has chronicled in a very talented way, the life and times of a Dallas PD legend in his book on Lt. Holloway. I was a volunteer working overtime assignments on those holiday shotgun squad stakeouts as a young Dallas officer and I can attest to the accuracy of the descriptions of some of the discomforts in those back rooms. This is a great read which I can absolutely recommend to anyone interested in true crime stories. Great job, Eddie!
Read more
2 people found this helpful
Helpful
Report abuse

John Dagen
5.0 out of 5 stars The Original S.W.A.T. Team
Reviewed in the United States on October 28, 2016
Verified Purchase
Great book! He describes the locations in such a way that you feel you are right there when it is happening. You feel like you can see everything happening as you look out of the two way mirror in the stores. Holloway was a legend on the department. I may be a little biased since I worked for Captain Walt and I worked with many of the officers in the book.
Read more
5 people found this helpful
Helpful
Report abuse

Kindle Customer
5.0 out of 5 stars Real Self Defense: With Shotguns
Reviewed in the United States on January 25, 2018
Verified Purchase
The book describes police stake-out squads defending store owners in Dallas from armed robbers during the 20th Century. Fast paced, well written and well documented; it provides many examples of when and where shotguns were used to immediately stop armed robberies. An excellent source of practical information on real self defense.
Read more
2 people found this helpful
Helpful
Report abuse

Tom in CA
4.0 out of 5 stars Worth reading
Reviewed in the United States on May 4, 2017
Verified Purchase
Its a pretty interesting book that gives you the feeling of really being there. Being a cop is a crummy job and this is what its like when things go wrong. Some good gunfight stories and a cop's view of humanity - which can be real accurate, depending on where you are.
Read more
2 people found this helpful
Helpful
Report abuse

Susie
5.0 out of 5 stars Great read
Reviewed in the United States on January 30, 2021
Verified Purchase
I stayed up until 0430 in the morning reading this. Could not put it down. I’ve been involved in police work for 33 years and have ready many police procedurals, true crime books, and heard hundreds of war stories. This is one of the best. Highly recommend it.
Read more
Helpful
Report abuse
See all reviews