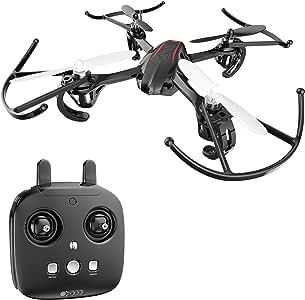 Take a 10 minute cool down break between flights to ensure your parts last as long as possible. Stop the drone immediately once the drone get struck or crashed.

How to Charge Battery：

4.3 out of 5 stars
4.3 out of 5
364 customer ratings
How does Amazon calculate star ratings?
Amazon calculates a product’s star ratings based on a machine learned model instead of a raw data average. The model takes into account factors including the age of a rating, whether the ratings are from verified purchasers, and factors that establish reviewer trustworthiness.

Yousef
4.0 out of 5 stars Great drone. Worth the money.
Reviewed in the United States on September 24, 2018
Color: RedVerified Purchase
As this is my first drone. I am very happy with it.
Pros:
1. It's very sturdy.
2. Great range. Well over the advertised range if in outdoors with clear line of sight.
3. Extra set of propellers.
4. Remote is good.
5. Great features like, 3D flip, autohover, different speeds, headless mode, etc.
5. Can be very fast in speed mode 3.

All for $40? Great deal. Now to the cons:
1. The battery housing is, well.... Doesn't exist, you literally slide the battery inside the drone scratching over the board soldering. I honestly could of fixed that myself with a little bit extra 10 cents worth of plastic and little bit of design engineering. It's always a pain to slide it in and out of the drone.
3. You will need to find a good cheap set of extra batteries and a charger if you wanna enjoy it and not just wait 60 minutes for every 10 minutes of flight.
4. As you expect from a slow drone, a slight wind is a pain to deal with.
5. The drone processr is not fast enough to manage the highest speed. It always will take a little longer to process your next direction change and it will feel like a little delay because the drone is that fast at speed mode 3.

Right out of the box, I was up and running in 5 minutes. I didn't even have to initially charge the drone. The unit trimmed up and was easy to use. I was able to zip around indoors with great ease.

This unit would be a perfect starter for those who are new to the hobby or kids looking to get started.

Charging time only take about 20-30 minutes but if you are looking to get more time, I would purchase additional batteries. I did notice any overheating issues I have seen with other units.

The LED's on the unit are slick and it is fun to fly around in low light. It adds a mysterious sci-fi type atmosphere. I had fun sneaking it into rooms with friends unsuspecting this little guy to be flying around.

With all this said, my only thing I would like to see is a camera, but for the price and the sheer joy it is to play with, this is a very minor set back.

Once I am able to get someone to videotape my flying this little guy around, I will post some videos. Until then, please feel free to shoot me any questions you may have.

This is a must have to add to your collection of drone.

Ashish Sharma
4.0 out of 5 stars Decent in flight and fair altitude hold. Precision can be a lot better
Reviewed in the United States on November 8, 2018
Color: RedVerified Purchase
I have a Syma S107G RC helicopter I've been flying for sometime now. And, I was looking for a drone to diversify my hobby collection. I did a lot of research before I made this purchase. I was also looking at other drone offerings by Holy Stone and DJI , and I realized that I should get started with a basic one first. And, then eventually graduate to the advanced camera-mounted, mobile app-controlled, and "follow me" versions.

I was then deciding between the HS170 Predator and this HS170G Night Elven. After thorough analysis of reviews & videos over the internet, I decided to give the newer HS170G a shot. It's been close to a month now that I've been practicing flying and improving on maneuvering the HS170G. And, right before writing this review, I flew the drone one more time to give a fair evaluation.

The good thing about this is that it's very light, very responsive, and has a good "horizontal" altitude hold. By horizontal, I mean it's gyro & four propellers are very good at maintaining the quadcopter horizontal/parallel to the ground. The three speed options work great from low to medium to high. The flip function also works well. And, so does the stop function, which gradually brings the drone back to a horizontal surface and turns the propellers off, and the emergency stop function. The direction stick also responds quite well. I haven't gotten the hang of the headless mode yet, so not commenting on it.

The not-so-good things about the drone are the altitude hold (driven by the throttle stick) and the trimming function, resulting in poor altitude stability. In the first five seconds of its flight, a black propeller blade broke: all that happened was that it collided mildly with the wall while taking off. That was a bummer. Glad that Holy Stone gave a set of extra blades. As I mentioned above, the drone has a good "horizontal" altitude hold, but not a complete altitude hold, meaning that the drone stays horizontal/parallel to the ground, but is not able to consistently maintain the same height from the ground. It tends to drift up and down, without the throttle being applied. Using the trimming function, I was able to maintain it steady in the horizontal plane, preventing it to drift left/right/forward/backward. But, when I keep the drone stationery in the air, fly it around without throttling, or flip, the altitude (steadiness in the vertical plane) would change noticeably enough, impacting the flight path and causing collisions. In fact, in the last run right before writing this review, the drone went berserk and even when I was trying to throttle it down, it went flying all the way to the top, touching the ceiling till I pressed the emergency stop button. The propeller blades even hit me a few times.

All in all, I am yet to explore more, the flight is great, but the altitude hold is something that needs to be worked upon by Holy Stone.
Read more

Keith Marion
5.0 out of 5 stars Great Drone for All Different Skill Levels, Highly Recommended!
Reviewed in the United States on March 15, 2018
Color: RedVerified Purchase
Another great drone from Holy Stone! This drone has several features that make it perfect for beginners and advanced pilots.
Features that make this drone great:
Altitude hold - perfect for fast flights and not worrying about altitude
Headless mode -Never lose orientation
Emergency Stop Button - Easy to access when you need to cut power immediately
Speed - Multiple speed levels, and top speed is pretty quick, too!
Remote - Great design, simple, and all buttons easily accessible for quick changes
Responsiveness - Very responsive with commands
Flight Time - I have only flown in colder temperatures, but still was getting 8-10 minutes per charge.

Overall, I am impressed with this little drone. It is fast, responsive, and has altitude hold function. I love Holy Stone, and their products are great regardless of your skill level. Highly recommended!
Read more
9 people found this helpful
Helpful
Comment Report abuse
See all reviews from the United States

Page 1 of 1 Start overPage 1 of 1
This shopping feature will continue to load items when the Enter key is pressed. In order to navigate out of this carousel please use your heading shortcut key to navigate to the next or previous heading.
Back
Next
Pages with related products. See and discover other items: rc quadcopters for beginners, small flying drones, flying a quadcopter, Best mini drones for beginners