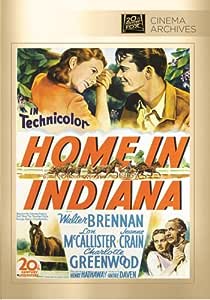 Oscar ® Nominated director Henry Hathaway; helms this heartwarming story of a lad (Lon McCallister) with a penchant for trouble. When he is sent to live with his aunt and uncle in the Midwest, he discovers a love for horses. At the same time he discovers a tomboyish girl named Char (Jeanne Crain) who shares his penchant as well. Also starring Walter Brennan and Charlotte Greenwood with Ward Bond. Shown in 4:3 full frame presentation.

4.6 out of 5 stars
4.6 out of 5
55 global ratings
How are ratings calculated?
To calculate the overall star rating and percentage breakdown by star, we don’t use a simple average. Instead, our system considers things like how recent a review is and if the reviewer bought the item on Amazon. It also analyzes reviews to verify trustworthiness.
Top reviews

Scott Morris
1.0 out of 5 stars Lovely movie, disappointing print...
Reviewed in the United States on February 1, 2014
Verified Purchase
When I read that Fox Cinema Archives was going to be releasing "Home in Indiana" on DVD, I was really excited. I saw this movie on the FX channel a few years back and enjoyed it. It's a forgotten little gem, featuring Jeanne Crain, Lon McCallister, and June Haver in early career performances. (For more on the movie, including a plot summary, feel free to visit IMDb.)

Unfortunately, the Fox Archive program has gotten a reputation for being hit or miss with the quality of their releases, and this particular release is sadly one of their misses. The print quality isn't terrible by any means, but it IS pretty soft, with a fair amount of blemishing / dirt / debris throughout. It would have been great to have a crisp, clean print of this. Instead, it feels like the Fox Archive crew simply pulled the existing VHS version of this movie off the shelf and duped it onto DVD, for a quick buck. [UPDATE: I have a friend who owns an official studio-released VHS version of "Home in Indiana" and when we compared the VHS version and the DVD version, it looks like Fox did indeed just dupe the new DVD release from the old VHS version.]

If Fox is going to charge almost $20 for this (and their other Archive releases), they really should have the courtesy to at least strike a brand new print of the movie(s) first. I'm not even talking about doing any restoration work, which I know would probably be prohibitively expensive, especially with small movies like this one, that aren't likely to sell a ton of copies. However, having been spoiled by the pretty consistently great quality of DVD releases under the Warner Archive program, I've come to expect other studios to deliver the same kind of quality, but maybe that's too much to ask.

Bottom line, I hate to turn anyone away from this sweet little film, but at the same time, I really hate to reward Fox for putting out second-rate product. They can -- and have -- done better with (some of their) previous releases under the Fox Cinema Archive banner. Very disappointing...

Peggy Eggleston
5.0 out of 5 stars I just bought Home In Indiana and was so happy to see it in DVD
Reviewed in the United States on September 21, 2014
Verified Purchase
I just bought Home In Indiana and was so happy to see it in DVD. I was ll years old when I was in Kentucky with my parents to see the horse races that my Dad loved to go to. Just my good luck I was there to see the making of this movie. Byron Perry, one of the race drivers who was a friend of my Dads said he would take me around and introduce me to all the stars. Boy, was I thrilled! I met and got autographs of stars like- Jeanne Crain June Haver, Ward Bond and Lon McCallister. I still have the autographs in a small notebook. Also met Walter Brennan but didn't get his autograph as he was due on the set for the next scene. I also got the autograph of the director, Henry Hathaway. I must say all the stars were so nice and I will never forget that wonderful day in Lexington, Ky. How lucky I was to meet them and they took the time to write their names in my little notebook. This is a good family movie and I would suggest you have it in your library of movies. Peggy Eggleston
Read more
6 people found this helpful
Helpful
Comment Report abuse

RJ
5.0 out of 5 stars Jeanne Crain was the best !!
Reviewed in the United States on June 23, 2020
Verified Purchase
Beautiful actress and a very beautiful story. Jeanne Crain during her tenure at Fox deserved better. She should have got her desired rolls in the robe and quo vadis...
Read more
Helpful
Comment Report abuse

Wapsie Yorkies
5.0 out of 5 stars Good Feeling Movie
Reviewed in the United States on November 19, 2018
Verified Purchase
Love it-have been looking for this movie with Walter Brennan for a long time. Could watch it over and over.
Read more
One person found this helpful
Helpful
Comment Report abuse

B. R. P. Pearson
5.0 out of 5 stars An All-time Favourite.
Reviewed in the United States on November 5, 2011
Verified Purchase
This is not a great film, and I am not interested in horses or racing, but from 1945 when I was a movie-struck 15 year old and went to Adelaide's magnificent Regent Theatre to enjoy the ambience and the Wurlitzer organ music, not caring about what was on the programme, I have loved this movie. Now in my eighties, I have a signed photograph of Lon McCallister in my cinema room and an original day-bill..

The charm of 'Home in Indiana' lay in the fine cast of young actors - Lon, Jeanne Crain and June Haver, ably supported by experienced and loveable adults, and the relations between them, plus the magnificent Technicolor photography. It made Indiana seem like a paradise on Earth to an impressionable young Australian, so much so that on one of my adult visits to the USA I made a special effort to visit that state. I was far from the only person who fell under its spell. It was, I think, the top box-office movie of the year.

I cannot understand why Twentieth Century-Fox has never released the film on DVD, particularly as they remade the story as 'April Love'. The two would make a very good double disk album. There is a dearth of films without violence and with 'feel-good' values in these days of mindless action and special effects, and a reminder of the time when film makers mainly depicted the world in a positive light would indeed be refreshing.
Read more
26 people found this helpful
Helpful
Comment Report abuse

Kindle Customer
5.0 out of 5 stars Brennan & Youngsters
Reviewed in the United States on September 29, 2017
Verified Purchase
I've enjoyed this movie since it first came out. Brennan provides the steadiness of an experienced actor in counter point to several young players who eventually became stars in their own right.
Read more
One person found this helpful
Helpful
Comment Report abuse

LXL
5.0 out of 5 stars Charming Love Story
Reviewed in the United States on July 10, 2017
Verified Purchase
A wonderful, charming old film about two kids who fall in love on a horse ranch in Indiana.
The colorful scenery is beautiful!
Read more
2 people found this helpful
Helpful
Comment Report abuse

Alan Rider
1.0 out of 5 stars One Star
Reviewed in the United Kingdom on May 17, 2018
Verified Purchase
The film was entirely in Spanish!
Read more
Report abuse

eileen
3.0 out of 5 stars Three Stars
Reviewed in the United Kingdom on August 5, 2015
Verified Purchase
I thought it was a musical didn't realise it was so old
Read more
Report abuse
See all reviews

Page 1 of 1 Start overPage 1 of 1
This shopping feature will continue to load items when the Enter key is pressed. In order to navigate out of this carousel please use your heading shortcut key to navigate to the next or previous heading.
Back
Next
Pages with related products. See and discover other items: fox film archives