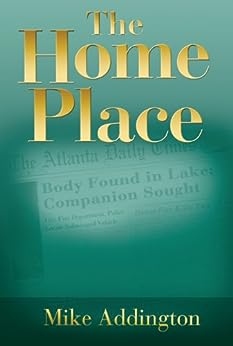 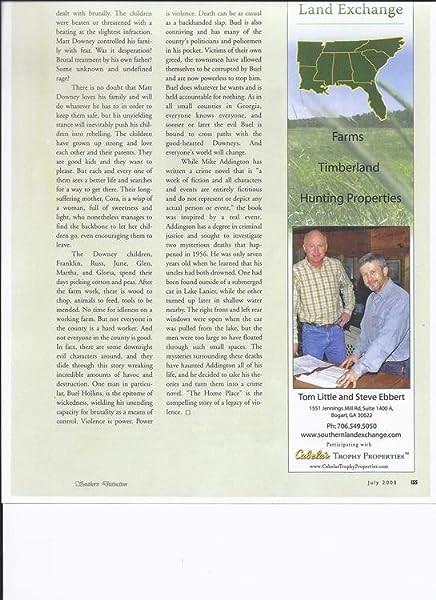 by Mike Addington (Author) Format: Kindle Edition
See all formats and editions
Sorry, there was a problem loading this page. Try again.
Matt's harsh words and ways permeated the farm, life made bareable only by his wife, the saintly Cora. The 10 children learned hard work and morals, which they would need when they left the safety of the farm in North Georgia in the 1950s. They would need the love and bonding of family when two of the boys left home and moved to town and ended up with a rough crowd. None rougher than Buel Hollins, who controlled the county through bribes and graft and, if that didn't work, through murder. When the Downey boys and Buel Hollins came together, only tragedy could follow.
Read more
Previous page
Next page

I loved the character Ruby. She was my favorite. The Home Place is a real story that develops as the reader reads on, instead of one of manufactured plots like most books today. One really identifies with the characters. I loved it. --Cathy Desko<br /><br />The book was a refreshing tale of life in the not-too-distant past where people used to take care of their own problems. The characters were vivid and real and I cried many times. --Hannah Jackson<br /><br />The villian was disgusting. I know there are people like him, but not too many, thank goodness. I felt so sorry for the mother, having to put up with such a husband. Never a kind word. Just work, work, work. But life was hard back in those days, so I guess with all those kids, he had to be hard. --Mary May Burress

The villian was disgusting. I know there are people like him, but not too many, thank goodness. I felt so sorry for the mother, having to put up with such a husband. Never a kind word. Just work, work, work. But life was hard back in those days, so I guess with all those kids, he had to be hard. --Mary May Burress

I loved the character Ruby. She was my favorite. The Home Place is a real story that develops as the reader reads on, instead of one of manufactured plots like most books today. One really identifies with the characters. I loved it. --Cathy Desko --This text refers to the perfect edition.

Back flap: Russ studied the new boy for a minute. Tommy was a little bigger than him, little older too, but not by much. "You one of them boys that come to live with Mickey, huh" "Yeah, he's my daddy now." "Can't be your daddy." "Why can't he? "Tommy said, jutting forward. "He said he was. From now on, anyways." "Can't just say you're womebody's daddy," Russ said . . . --This text refers to the perfect edition.

MIke Addington is a graduate of Georgia State University with a degree in Criminal Justice and a lifetime love of listening to stories. Now living in Cocoa Beach, FL, where he enjoys the beach and body surfing and favorite coffee shops and also the wonderful people of Cocoa Beach, especially those in my writing group. --This text refers to the perfect edition.
Read more

Greetings fellow readers. Thank you for having the interest to arrive at this page. You are a big part of the reason I write. I've been a reader since a very early age--big boy books that is--and I thank my dad and the community of Griffin, Georgia, for fostering higher learning. I've learned much more by reading than any other media.

At a high school reunion a few years ago, a classmate named Robert Rhom told me he remembered the short stories I used to write and read to the class in the sixth grade. Frankly, I had forgotten all about that, but when he mentioned the theme that all the stories centered around, it came back to me.

I didn't begin my serious writing career until ~1990 while I worked for the postal service. What provoked me was remembering my wonderful experience in the US Air Force while stationed in Aviano AFB, Italy. My unit was tasked with surveillance of the USSR and China for possible ICBM attack of the US. Can't be more descriptive because it is possibly still classified. The terrorist group The Red Brigade or Brigatta Rosse was very active in Italy during this period. To round out the story, which couldn't be told without at least a little romance, I included three Italian women who myself and two friends dated for a considerable period. I mentally formulated a plot before I began writing and wrote the entire book on 13 legal pads over a two-year period. This book became titled "Treviso: The First Terrorists." While I can't say much of the written word is true, the inspiration behind many of the scenes came from the truth. I will leave you, the reader, to discern which ones.

Larita (FL)
5.0 out of 5 stars The Home Place - a truly good story
Reviewed in the United States 🇺🇸 on December 23, 2013
Verified Purchase
I really enjoyed this book. The story keep me reading way into the night just to find out what was going to happen next. Our family having a 'Home Place' outside of Gainesville made me relate to the farm environment. I was a kid when Lanier was built and spent many summers in an old farm house there. My great uncle use to take me fishing and had shown me places where there use to be stills in the woods. He never owned up to them being his but it wouldn't have surprised me. Our home place gone now and expensive houses built there on the lake where it stood. This story took me back and brought back memories. Thanks for a good read!!
Read more
Helpful
Report abuse

Kindle Customer
4.0 out of 5 stars Country Family's Drama in the Deep South
Reviewed in the United States 🇺🇸 on February 25, 2014
Verified Purchase
Hard life on a southern farm with little to show for it drives three sons to leave. Their attempts to 'better themselves' teach them the world is hard in other ways. All the children test themselves outside the family circle. In spite of trouble Cora, the mother, and Matt, the father, stay true to themselves. This is my second time reading The Home Place and I found more to enjoy with each read. Eileen Callan
Read more
One person found this helpful
Helpful
Report abuse

Christi G
5.0 out of 5 stars Captivating
Reviewed in the United States 🇺🇸 on January 29, 2014
Verified Purchase
I'll admit that this isn't my preferred genre. I kind of started this story with little expectation of ever really finishing it.

This was a great story about family. There were many struggles and trials, but the central theme was the love that this hard-nosed father had for his children. It was a heartbreaking tale, what this family went through. It was very well written, though, and I absolutely could not put it down. I may just try branching out of my literary comfort zone more often!
Read more
2 people found this helpful
Helpful
Report abuse

Kimdecker1986
4.0 out of 5 stars good read
Reviewed in the United States 🇺🇸 on March 6, 2014
Verified Purchase
I really enjoyed this book. I didn't know what to expect, just thought the plot was good when I purchased it. I generally read modern day reads, so this was a breath of fresh air. The author definitely takes you back to the time period through his use of word choice. It was slow at times and took me some time to read.
Read more
Helpful
Report abuse

Yvonne Mason
5.0 out of 5 stars A Page Turner
Reviewed in the United States 🇺🇸 on July 15, 2011
Verified Purchase
Mr. Addington has created an excellent story out of a true crime which happened in Gainesville, Ga. Being from that part of the country I knew exactly the places he described. One can see the harshness of the land, the need to flee the farm and the trouble that abounds as the three sons try to escape the proverty they grew up in.
One can also feel the evil that grabs them and refuses to let go. I give this book five stars.
Read more
Helpful
Report abuse

Margie S.
5.0 out of 5 stars Home
Reviewed in the United States 🇺🇸 on October 12, 2014
Verified Purchase
This is a hard book to read because it is about my growing up days too. The father is a hard man and he's hard on his kids. I wanted to say to him ease up and hug your kids more. We even lived in that area of Georgia for a year. It's a good story but heartbreaking for the family. It's worth reading tho.
Read more
Helpful
Report abuse

Amazon Customer
5.0 out of 5 stars The Home Place captures a wonderful period of time
Reviewed in the United States 🇺🇸 on May 24, 2017
Verified Purchase
I truly enjoyed this story. Vivid descriptions of a time and place in a family's history. The story brilliantly points back to a simpler time and makes the point that life at the home place was anything but simple. Well done!!!
Read more
Helpful
Report abuse
See all reviews
Report an issue
Does this item contain inappropriate content?
Report
Do you believe that this item violates a copyright?
Report
Does this item contain quality or formatting issues?
Report