You've subscribed to Welcome To Redemption! We will preorder your items within 24 hours of when they become available. When new books are released, we'll charge your default payment method for the lowest price available during the pre-order period.
Update your device or payment method, cancel individual pre-orders or your subscription at
Your Memberships & Subscriptions
There was an error. We were unable to process your subscription due to an error. Please refresh and try again. 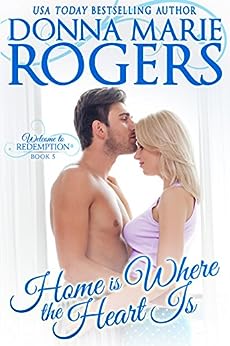 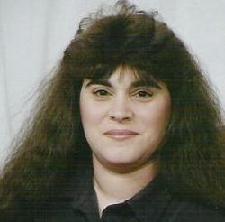 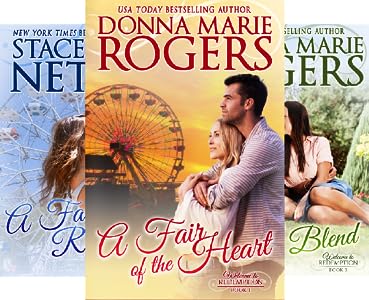 5 Stars *Reviewer TOP PICK*  "I definitely wasn't disappointed in Book 5 of the Welcome to Redemption series...The chemistry between these two was obvious, but it seemed they were the last to see it that way. And I can't forget to mention that I loved Bo's antics throughout the entire story and just loved the little romance he had going on in his life too! If you're in the mood to read some feel-good stories, then Welcome to Redemption is the series to look into!"

sherry
5.0 out of 5 stars Love Reading this Series
Reviewed in the United States on February 28, 2016
Verified Purchase
I love this series "Welcome to Redemption" I love books that form a series and talk of good friendships, good family that can be serious and funny. You know who's going to end up with who, but it's how they get there that is so delightful to read about. Love the series written by two women, Donna Marie Rogers and Stacey Joy Netzel. Amazing that two different woman can just let the stories flow one into the other. I really enjoy reading this series and hope it keeps going.
Read more
Helpful
Report abuse

Kymee
5.0 out of 5 stars The Redemption Series
Reviewed in the United States on October 5, 2014
Verified Purchase
I have enjoyed books 1-6 start in on book 7 now; Stacey and Donna have done a great job with the town of redemption I feel like live there; I have really enjoyed this series so far I like how everyone life intertwine with each other. I know the authors probably won't read my review but I do have one complaint I wish there was more I feel like I'm left hanging like what happens too Matt and Carrie, what happens to Drew and Lindy or my other favorite couple Allie and Rick and of course the couple who starts this series off Caleb and Lauren do they marry does Allie move in with Rick I mean I want more.......
Read more
Helpful
Report abuse

Flowerchild
5.0 out of 5 stars GREAT series
Reviewed in the United States on January 1, 2013
Verified Purchase
This is a fun series to read. Each book is fairly short, so it's not a big commitment to get through them. The characters are fun and realistic, although they are not extremely complex. Due to the brevity of the story itself, the characters don't really have the time to grow into complex beings. Occasionally, I felt like there was a contrived event or two, but when you read romance fiction you are not expecting true to life situations. Anything can happen. Therefore, the contrivances were not a big problem for me. Overall, I think it's a great series.
Read more
Helpful
Report abuse

Carl T. Booker
5.0 out of 5 stars Love story with a bit of mystery
Reviewed in the United States on September 25, 2013
Verified Purchase
This book was a bit of romance and a bit of mystery. The story line moved along quite well and the
characters were not too bulky to keep straight. I didn't realize it was a romance novel when I got it,
but it was interesting and well-writen.

Karen Teague
5.0 out of 5 stars LOVED IT
Reviewed in the United States on February 10, 2013
Verified Purchase
This book is part of a series and I read each of them and just loved them and I trully wish there was more, which I've been told will be more and I for one look forward to that more. Each of the stories touch your heart, by making you cry, laugh and feel nice and warm all over.
Read more
Helpful
Report abuse

JennyRose
4.0 out of 5 stars Damsel in Distress
Reviewed in the United States on March 13, 2012
Verified Purchase
This was a witty book. The reason this book got a 4 out of 5 for me is because the author never resolved the issue of the two men that broke into Lindy's house. They just got away. I was hoping that the POS's were caught and hung by their...well you know. I still loved it though!
Read more
One person found this helpful
Helpful
Report abuse

YDJ
5.0 out of 5 stars Home Is Where the Heart Is (Welcome To Redemption Book Five)
Reviewed in the United States on November 4, 2014
Verified Purchase
I don't know how to explain this book. Not only did Drew and Lindy fall for each other but their dog and cat fell for each other. The book was funny, romantic and the list goes on. You will definitely enjoy it
Read more
Helpful
Report abuse
See all reviews

Marie P
3.0 out of 5 stars Such a clever series
Reviewed in the United Kingdom on June 26, 2012
Verified Purchase
OMG! This series is amazing, can i please request another by these two authors. It is so clever, a series of 6 books with 1, 3 & 5 written by one author and 2, 4 & 6 by the other, but all books overlap and tie in together and in each there is at least one conversation between characters that is repeated in another book but from the other characters view point - Excellent!

This is book 5 and for me this is the weakest of the series, that doesn't mean it is a bad book - just the others are that good. Lindy is a spoilt, feisty woman who you love and hate with equal measure, Drew is stubborn, head-strong and like most men fights love all the way kicking a screaming. The let down for me are the holes and unfinished storylines in this book - i cannot be more specific without giving away the plot - and this is the only book in the series that has holes.

This series needs to be read in order, i got this book instead of book 3 which had huge spoilers in for 3 & 4, having said all that it is still a good read and the series is amazing and so cleverly weaved you just have to read it.
Read more
Report abuse