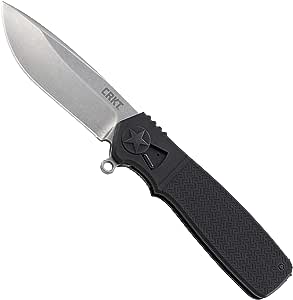 Visit the Columbia River Knife & Tool Store
4.6 out of 5 stars 314 ratings
Available at a lower price from other sellers that may not offer free Prime shipping.

The Edge Of A Revolution

Life is messy. Depending on your vocation or late-night garage project, your knife puts up with everything from grime to sand; dirt to grease; dust to mud. As your knife slows down, so does your productivity.

Ken Onion is no stranger to this issue. In true form, he spent 10 years tackling it with fiery passion and the result is the innovative Field Strip technology.

It’ll stand the front line during a coordinated assault on your to-do list.The Homefront EDC is among the first in our fleet to feature “Field Strip” technology. This technology allows you to clean and restore your knife to perfect working order without tools, right where you stand so you don’t skip a beat.The breakthrough “Field Strip” innovation comes from the shop of world-renowned knife craftsman Ken Onion and has been over ten years in the making. To disassemble the Homefront EDC when the knife is in the closed position, push the front release lever away from the blade, then spin the turn release wheel on the rear of the handle away from the pivot shaft—once you feel the handle release, pull it up and away from the blade. Reassembly is as easy as reversing the procedure, allowing for practical, quick maintenance where you stand.From his shop in Kaneohe, HI, Ken Onion designed the tactically inspired, everyday carry Homefront EDC knife to stay true to its vintage roots. The bayonet lug-style flipper sets off the smooth open action of the stainless steel drop point blade, while tank jimping on the backstrap sits snugly against your palm. It stands up to the looks of a WWI heirloom, and it sure as hell stands up to any job it encounters. The handles are made of stealthy black, glass-reinforced nylon and house an impressively beefy silver stonewash blade. Classic on the outside, impressively futuristic on the inside, the Homefront EDC is about to change everything.How Field Strip WorksField Strip Technology lets you easily disassemble your knife for cleaning without tools. To disassemble, close the knife, push the front release lever up. Then spin the rear release wheel clockwise —once you feel the handle release, pull it up and away. Handles and blade come apart easily. To bring the knife back together, place the blade and handles into the closed position - press and hold the pivot. Once the pivot is seated correctly, rotate the release wheel counter-clockwise until snug. Push front lever down. The knife is restored to full working order.For a quick FAQ on how Field Strip works, visit CRKT's website.Specifications:Blade Length: 3.539" (89.89 mm)Edge: PlainSteel: 1.4116Blade Finish: StonewashBlade Thickness: 0.135" (3.43 mm)Grind: HollowClosed Length: 4.720" (119.89 mm)Open Length: 8.250" (209.55 mm)Weight: 4.3 oz (121.9g)Handle: Glass Reinforced NylonStyle: Folding Knife with Locking Liner

4.6 out of 5 stars
4.6 out of 5
314 global ratings
How are ratings calculated?
To calculate the overall star rating and percentage breakdown by star, we don’t use a simple average. Instead, our system considers things like how recent a review is and if the reviewer bought the item on Amazon. It also analyzes reviews to verify trustworthiness.

Patrick Ross Duval
5.0 out of 5 stars I trust this blade.
Reviewed in the United States on June 13, 2017
Color: BlackVerified Purchase
They say one Knife can't do everything, and while I agree, this little shock trooper of a knife really tries its best and still stands by me at days end.

I chose the Krupp steel over aus 8, because it won't rust as badly: Personal applications below.
I use this knife for field dressing animals I take down while hunting, I use it for gutting fish, I use it for cutting tomatoes and the like, cutting meats while eating, light bushcraft; e.g. feather sticks/making toggles/making notches/and trapping craft.

It also stands as a last ditch defense blade, and a pistol retention tool for me.
It being legal almost everywhere was a huge factor for this choice.

It may seem crazy and unsanitary to use this for all these listed functions; but hang in there.
What makes it able to roll with the above mos's and not make me ill, IS THE TAKE DOWN FEATURE.

I can dissemble it right on the spot after each use, and straight up sterilize the blade in the field, with zero tools.
For me, this function does indeed totally change the game.

I will never baton with a knife; I use a folding wood saw as any sane person would.
If you use the knife for what it is made to do, I don't see this ever breaking.

The spine of the knife is beefy, and the tip style is not a needle point, so this makes it even harder to break.
Added plus.

The bayonet lug also keeps it extremely secure in your hand and prevents slipping when your hands are covered in blood while processing animals; really excellent design..

My only real complaint is you must wrist flick to get it to open fully; it's the knife's only real flaw.
Simply hitting the flipper will not open the knife, it requires a wrist flick, and then turning the blade to face forward for quick deployment.

You will need to train with the knife, but over time it becomes second nature.
I also bought some Tuf Glide, non oil based metal protector/lubricant, stuff goes on as a liquid but evaporates quickly into a powder, no dust, no lint stick, and it's improved the action vastly.

Using it, the knife now almost fully opens without a wrist flick.
I have not messed with the tightening screw on it, or applied loctight yet, but this may fix my stated issue.

Also the pocket clip rides really deep, making deployment slow, I braided some para cord and wrapped it around the pocket clip to make it ride higher, which solved that issue.

For its small issues, I can't complain.
I have fallen in love with this knife, I like it more than my Zero Tolerance; which cost me hundreds more, I love it more than my Cold Steel oss and Spike.

There is something timeless about the knife, the stone washed finished and old school combat design with the lug as the flipper.
The take down feature extends its range of use, and reduces my carried equipment and weight.

Until they make another knife with this take down feature, I can't see myself with another blade.
While some may call me crazy for using a knife like this for all the above tasks.

I would simply respond, that some people go into nature for a weekend, other people live side by side with it daily.
Hardcore? No, just living as nature intended, to the average civilian, it just seems that way because they're detached from their natural element.

Viking Kong
5.0 out of 5 stars Another quality knife from CRKT
Reviewed in the United States on April 3, 2018
Color: BlackVerified Purchase
I did my research before purchasing this knife and the reviews were promising. I always take the very negative reviews with a grain of salt as I chalk those up to people who don't fully understand the product or how to use it. Now, I have to say that I find the negative reviews, for this knife, to be laughable. I don't understand how anyone can NOT disassemble and reassemble this knife. It's very simple to do. The fit and finish of this knife is what I've come to expect from CRKT knives. A couple of my friends bought this knife after seeing mine and they love it as well. It has a nice and solid lockup with no wiggle at all. Flipping the blade out is smooth and effortless. In my pocket or clipped to my pocket, the blade stays in place and I have worries of it flipping out. I carry lighter knives, but this isn't horribly heavy. The blade came razor sharp and holds an edge well. I use this knife to open boxes, cut Velcro strips, break down cardboard and it holds an edge well. It fills my hand well and feels comfortable to me. I rotate through several knives that I use for EDC and this one has become one of my favorites.
Read more
8 people found this helpful
Helpful
Comment Report abuse

Jim Paschall
4.0 out of 5 stars This knife fits me.
Reviewed in the United States on June 3, 2019
Color: BlackVerified Purchase
Great value for the money. I do not need an exotic knife blade steel, I am not cutting up beer cans here. This knife just feels and looks good to me, and is easy to deploy from my right pocket. The blade profile is awesome to me. The take down is cool, but I doubt I will rarely need to. The handle is real simple, and meaty enough to fit my hands. I lubed this one, just as I do all my knives, with my own brew of engine assembly lube. Once that was done, it opens LIKE BUTTER with the best feeling and looking flipper I have ever used. I sharpened it to a 20* blade angle and it cuts very well and keeps the edge plenty long enough, and I do cut a lot of cardboard, tree limbs and still straight slices envelopes and plastic bags afterwards. I have plenty of knives, many of them more expensive ones, and this one tends to fit me best and is the most user friendly.

CONS- When clipped to my right pocket, it makes it a bit of a tight fit to get my car keys, because I do not have tiny hands. The texture on the back of the knife as I am inserting my hand into my pocket is pretty rough on the back of my hand, so one would want to be careful at just shoving your right hand in your pocket with this knife clipped in there. The last CON to me is that the clip catches on EVERYTHING on my right side, most especially when exiting and entering a car door. It has scratched wood, car paint, house door frames, and anything else you can think of. This con alone is the reason I can only wear it on adventures and take it off as soon as I take my pack off. If you are a little person with small leathery hands, that carefully opens your car doors real wide and gently position yourself into the vehicle, this would be the PERFECT big pocket knife for you. Even so, I still love this knife, and truly wish Ken would design more knives with this blade profile.
Read more
4 people found this helpful
Helpful
Comment Report abuse
See all reviews

Page 1 of 1 Start overPage 1 of 1
Previous page
Next page
Pages with related products. See and discover other items: Best knives for edc