Honey and millions of other books are available for Amazon Kindle. Learn more 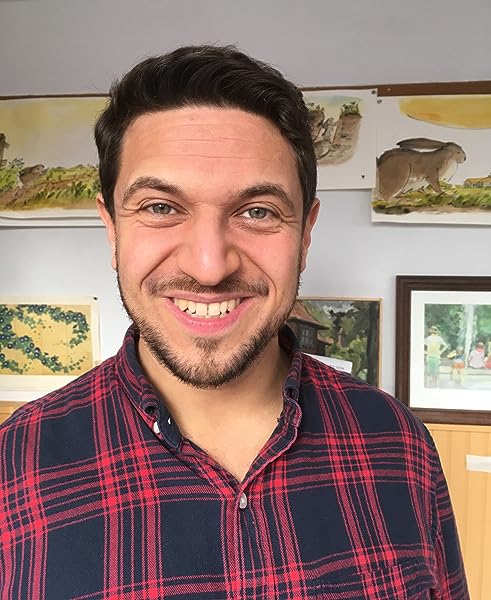 by David Ezra Stein (Author, Illustrator)
4.6 out of 5 stars 814 ratings
Editors' pick Best Books Baby-Age 2
See all formats and editions
Sorry, there was a problem loading this page. Try again.

Bear is here to enjoy the gifts of each season, especially summer and HONEY!

Bear has awoken from his winter nap with only one thing on his mind: honey! Alas, it is too soon for honey, so Bear tries hard to be patient. Fortunately, the world around him is waking up, too. There is warm grass, berries, the smell of flowers. There is rain to dance in and a creek to swim in. Bear is almost content, until, one day, he hears a welcome buzzing sound . . . and finally it is time for Bear to delight in the thing he relishes above all others--and it is as warm, golden, sweet, and good as he remembered.

This sweet companion to David Ezra Stein's award-winning Leaves celebrates the joy of savoring something you love.
Read more
Previous page
Next page

* “The curious young bear from Leaves returns for ‘his second year,’ fresh from hibernation and eager for the taste of honey. . . . In the meantime, the other delights of spring and summer beckon, and the bear relishes warm grass, bursting berries, and rushing rain as he waits for the telltale buzz that heralds his favorite treat. Highlighting the natural greens and golds of summer, Stein’s pen-and-watercolor illustrations are suffused with loose, childlike exuberance, while their relatively small scale invites a sense of intimacy, drawing readers into the bear’s anticipation and eventual satisfaction. Throughout, the art balances the straightforward sensory details of the text, with some actions described and others—such as a well-deserved bee sting on the nose—purely visual. A seasonal read with storytime potential and staying power, Honey is not to be missed.”—School Library Journal, starred review

“The text emphasizes Bear’s single-minded pursuit, but when he must wait, it turns to his delight in the world around him as the spring turns to summer and then fall. The short sentences and the many sensory words work well, helping readers to share his experiences. . . . The freewheeling, expressive illustrations bring Bear’s world to life on the page. A well-crafted sequel to Leaves.”—Booklist

“The softly blended colors . . . evoke the passing of the seasons from spring to the height of summer into fall, complemented by rhythmic, alliterative prose. . . . This quiet story about the simple pleasures of summer and the building anticipation of something good will warm cold winter nights and elicit conversations with older listeners about memories of any season.”—The Bulletin of the Center for Children’s Books

“Stein captures Bear’s wide-eyed enthusiasm for discovering the natural world around him, as Bear eagerly puts all his senses to work. . . . The use of repetition and the steady pacing, which then accelerates once Bear finally hears buzzing bees, make for compelling page-turns. Stein’s clean page design and uncluttered compositions keep the focus on the endearing protagonist, who is depicted in relaxed, carefree lines. . . . Stein’s writing is filled with vivid descriptors. . . . Any toddler who has ever waited patiently (or not-so-patiently) for something will relate to the sight of Bear racing toward the bees (“Ouch!”). Once single-minded Bear does get the honey, readers can’t help but rejoice with him as he delights in it. Simply delicious.”—The Horn Book

Award-winning children's author and illustrator David Ezra Stein was born in Brooklyn, New York. His works include Interrupting Chicken, Leaves, Monster Hug!, Tad and Dad, Pouch!, and Ol' Mama Squirrel. In addition to winning the Ezra Jack Keats award in 2008 and a Caldecott Honor in 2011, Stein's books have been named to several major book lists, such as Publishers Weekly's Best Book of the Year, Kirkus Reviews' Editor's Choice, and School Library Journal's Best Book. He lives in Kew Gardens, New York, with wife, Miriam, and their son, Sam.
Start reading Honey on your Kindle in under a minute.

David Ezra Stein is the Caldecott-Honor illustrator and author of INTERRUPTING CHICKEN, DINOSAUR KISSES, I'M MY OWN DOG, and many other award-winning picture books, including LEAVES, winner of an Ezra Jack Keats New Writer Award. He lives in Kew Gardens, New York.

Sk324
1.0 out of 5 stars It's meh book, kids don't like it
Reviewed in the United States on August 20, 2019
Verified Purchase
I got this book as part of the amazon bookbox subscription. And they give you options to choose from ~4 books. The reviews seemed great, but few (~30 or so), which should have been the first sign that this isn't a great book. This is a book that doesn't engage/interest children. The storyline is bland. And it's boring for adults to read to their kids. There is not great aha, and nothing really that kids learn, except that bears like honey. This book is collecting dust and sitting on the donate pile. Please don't waste your money on this one.
Read more
2 people found this helpful
Helpful
Report abuse

Hayley
1.0 out of 5 stars Sequel to Leaves
Reviewed in the United States on May 1, 2020
Verified Purchase
I received this book as part of the Amazon book box subscription service that we just signed up for. The book seems to be a sequel to a book called Leaves so it starts out with "it was his second year 'im back' he said".....which is confusing when you haven't read the first book (or even know it exists). It is about a bear patiently waiting/searching for honey. The illustrations are alright but didn't grab my daughter's attention or keep it. The descriptive phrases seem to be a bit far up their own arse. I am assuming that's why the book was "recommended" because there isn't much story. Honestly, I was disappointed with two of the four books from the subscription box (this being one of them) and if it doesn't improve, we will be cancelling. It felt like Amazon was just trying to get rid of inventory.
Read more
One person found this helpful
Helpful
Report abuse

Erick A.
2.0 out of 5 stars The drawings are beautiful, the story is lacking.
Reviewed in the United States on April 3, 2019
Verified Purchase
We enjoyed the art, the story was lacking. I bought this as a book to read my child before bed time, it was a quick read nothing really happens, and (spoiler alert) the bear gets the honey at the end.
Read more
5 people found this helpful
Helpful
Report abuse

I got this as part of our Amazon book box and wish I had picked a different book. I’ll be donating it so hopefully someone else has a better time with it.
Read more
2 people found this helpful
Helpful
Report abuse

D. Linscott
4.0 out of 5 stars Refreshing story for story's sake alone
Reviewed in the United States on May 12, 2019
Verified Purchase
Just a good book for the pleasure of reading without a moral to the story or trying to teach this or that. Story for story's sake alone. Today's children's books are saturated with teaching tolerance, diversity, kindness, anti-bullying and on and on. That is all fine and necessary but what a delight to read a simple story for pleasure and enjoyment alone.
Read more
2 people found this helpful
Helpful
Report abuse

Kathryn
3.0 out of 5 stars Kind of an odd one
Reviewed in the United States on May 11, 2020
Verified Purchase
I really like the art in this book, visually it is very pleasant. The writing is a little strange for a children's board book? Some parts are kind of abstract and other lines seem randomly included and nonsensical. I don't know that the kiddo really minded and my husband actually likes the writing, but I was not super into it. Maybe it's too deep for me, who knows. I would skip it.
Read more
One person found this helpful
Helpful
Report abuse

AmazonUser
1.0 out of 5 stars Terrible
Reviewed in the United States on July 23, 2021
Verified Purchase
Got this in the Amazon book box subscription we have. It had good reviews but I’m still not sure how or why. It’s absolutely awful. It’s not engaging at all for either me or my child. Not sure how it ever even got published in the first place?!
Read more
Helpful
Report abuse

Amazon Customer
1.0 out of 5 stars 😫
Reviewed in the United States on August 12, 2019
Verified Purchase
Honestly the book had no point.
The pictures weren’t that good and my daughter and I really just didn’t enjoy it at all.
Read more
3 people found this helpful
Helpful
Report abuse
See all reviews

Pen Name
5.0 out of 5 stars Gorgeous book
Reviewed in the United Kingdom on May 16, 2020
Verified Purchase
I love how this book is written. Few words but very descriptive. I’ve ordered more from the same author based on this book
Read more
One person found this helpful
Report abuse
See all reviews