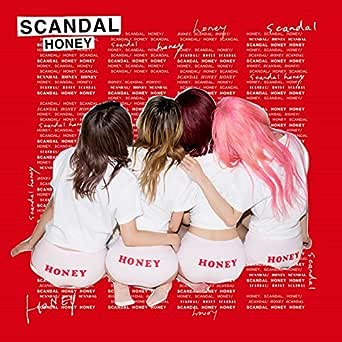 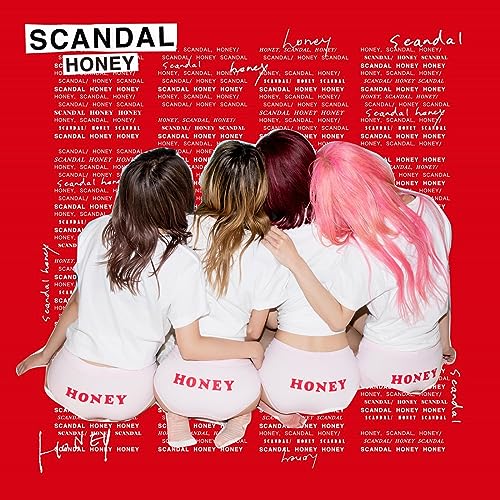 4.5 out of 5 stars
4.5 out of 5
96 global ratings
How are ratings calculated?
To calculate the overall star rating and percentage breakdown by star, we don’t use a simple average. Instead, our system considers things like how recent a review is and if the reviewer bought the item on Amazon. It also analyzes reviews to verify trustworthiness.
Top reviews

Speedster
5.0 out of 5 stars SCANDAL ROCKS!!!
Reviewed in the United States on March 27, 2018
Verified Purchase
After being initially slightly disappointed with their Yellow album, I was worried that their music & style were changing, and they were moving away from their rock/punk/alternative roots. But they totally rock on Honey, with one good song after another.

On my first listen, I immediately liked 7 songs right away, and the other songs grew on me after a few more listens. My initial favorites were "Platform Syndrome", "Over", "Electric Girl", & "Koisuru Universe". It has taken me almost 6 weeks, but I finally decided that "Electric Girl" is my favorite on this album, with "Over" and "Koisuru Universe" tied for 2nd fave. As mentioned by other reviewers, the order of the songs is perfect...starting out with 4 fast-paced songs, then slowing down with the next 3 songs, then ramping up the tempo gradually with Futari, before rocking out and closing with "Electric Girl" & "Koisuru Universe", which leaves me in an up tempo good mood. If they performed this album live, the order of the songs would be perfect for a concert.

Despite all the good songs on Honey, my favorite ("Electric Girl") won't be in my Top 10 list of favorite Scandal songs, simply because all 10 of those songs are pre-Yellow, and I prefer Haruna's vocals before their Yellow album. "Electric Girl" could make my Top 20 list though (but that might be hard to do with "Rainy", "Osaka Lover", "Flashack No. 5", and "Freedom Fighters" most likely moving into my Top 20).

If you're a new or long-time Scandal fan, I highly recommend this album. You will not be disappointed!

BTW, it was exactly 2 yrs ago today March 27 when I "accidentally" discovered Scandal when I searched youtube for "Scandal". I thought I would find videos for the 80s American band with the same name (with Patty Smythe on lead vocals), but was surprised to see videos for a different "Scandal". If you had told me earlier that day that I would accidentally discover a 4-girl rock band from Japan who would become my favorite all-female group less than 3 months later, I would have thought you were crazy. But despite not knowing how to speak a word of Japanese, that's exactly what happened....by June of 2016 I had all of Scandal's albums, and they had indeed become my favorite all-girl group. I love this band's music, and find all 4 members to be very likable. They are talented, dedicated, hard-working, and I wish them continued success.

Autonomous x
5.0 out of 5 stars Strait Forward Classic Scandal
Reviewed in the United States on February 19, 2018
Verified Purchase
I have been a fan of Scandal Since I was in highschool and was highly dissapointed with their last album "Yellow". I am glad to say "Honey" is a return to form for the band to the strait forward rock sound. "Yellow" had an overly polished pop sound with generic songs. Honey is one catchy Rock song after another! Highly reccomended if you like Japanese music 😀
Read more
3 people found this helpful
Helpful
Comment Report abuse

Amazon Customer
5.0 out of 5 stars A Valentines Day Surprise
Reviewed in the United States on February 14, 2018
Verified Purchase
This album is great. A lot of the songs are catchy and fun, starting with and ending with uptempo pop rock with some slower photo shoot type vibes in the middle of the album. The sequencing of the tracks blends pretty well, and i especially liked the way the first 4 tracks open the album. This review is for the digital version of the album. I preordered the physical copy here that comes in March.
Read more
3 people found this helpful
Helpful
Comment Report abuse

Peter M
5.0 out of 5 stars Scandal's latest is one of their best!
Reviewed in the United States on February 12, 2018
Verified Purchase
This is an excellent album that ranks among the group's best work. All four members shine musically, and Mami and Rina have written some great songs. There are plenty of dynamic rock songs, with 'Over', 'Oh! No!', 'Midnight City' and 'Electric Girl' being early favorites. I'll be listening to this album a lot!
Read more
3 people found this helpful
Helpful
Comment Report abuse

Oscar Silva Garcia
VINE VOICE
5.0 out of 5 stars Mix of latest hits.
Reviewed in the United States on April 16, 2018
Verified Purchase
These girls don't waste the time, and it's good to see the newest songs released just several weeks ago into a well-made studio album. Maybe only "Take me out" is the "older" song into the setlist but it matches perfectly with the rest of the works contained in the album. Excellent for both fellow fans and newcomers for this iconic japanese band.
Read more
One person found this helpful
Helpful
Comment Report abuse

Indy
4.0 out of 5 stars Weak Album
Reviewed in the United States on October 3, 2018
Verified Purchase
Weak Album. Nothing compared to Yellow, Hello World, Standard, or Best Scandal. I really like Platform Syndrome, Take Me Out (but it's a single which I already had), Electric Girl, & Koisuru Universe. But everything else is kind of weak. But hey, it's still Scandal! :-)
Read more
Helpful
Comment Report abuse

William Bowen
4.0 out of 5 stars Not my favorite by Scandal
Reviewed in the United States on February 27, 2019
Verified Purchase
Not exactly my favorite album by Scandal, Yellow is, then Best Scandal. Those are all I have so far, I guess if they all sounded the same you would only need to buy one.
Read more
Helpful
Comment Report abuse

Miso
3.0 out of 5 stars Not the sound I was looking for
Reviewed in the United States on July 26, 2019
Verified Purchase
These girls really need to get back to their roots.
Only one, maybe two, good song(s) on this album.
The rest is little more than syncopated noise.
Read more
Helpful
Comment Report abuse
See all reviews

lordkythe
3.0 out of 5 stars Not their worst...
Reviewed in Canada on July 2, 2018
Verified Purchase
While their original work is really outstanding, they are losing touch with their roots. Yellow (the previous one) was by far their worst album, so I am happy to say this one is slightly better. But they are going mainstream and this is just sad. Nothing like their previous work, culminating with Queens are Trumps as their best work. Now it all sounds like auto-tuned studio albums. Too bad!
Read more
Report abuse