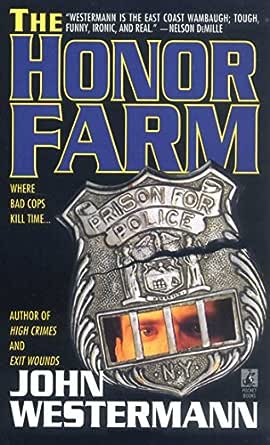 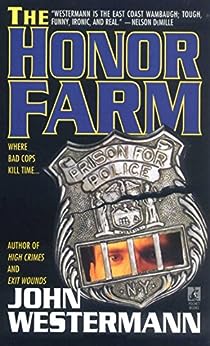 On Long Island, Vietnam vet and Nassau County cop Orin Boyd (returning from Exit Wounds) is still only a uniformed cop, largely because of his frank contempt for authority. Breaking up an apparent assault, Boyd knocks around crooked right-wing State Senator Tommy Cotton (aka "Senator Sewer"). Cotton wants Boyd's head. But Police Commissioner David Trimble has a plan of his own: in exchange for Boyd copping a plea for assault, thus satisfying Cotton, and doing six months in the county's "country club" jail, he'll grant Boyd a gold shield?on the further condition that, while in jail, Boyd investigate the death of Trimble's son, who allegedly hanged himself with one day left in an 18-month sentence. Shortly after Boyd's arrival at the "farm," there's another "suicide" and the surfacing of many motley suspects. The top con there, an ex-PBA leader looking for Boyd's legendary stash of ill-gotten money, begins a computer campaign to dry up Boyd's bank accounts and to frame his wife for embezzlement. Boyd's boat is sunk, his house is torched and his wife and little daughter are stalked by a hit man. Westermann, who worked 20 years as a Long Island cop, brings plenty of colorful detail to the novel and to Boyd, who's smart, funny and not above taking the law into his own hands. The pacing is relentless, and the uncovering of secrets old and new will keep readers glued as they're plunged into a Long Island that's way beyond Levittown.
Copyright 1996 Reed Business Information, Inc. --This text refers to an alternate kindle_edition edition.

A whodunit with a twist--instead of going undercover on the mean streets and leafy suburban lanes of New York's Nassau County (as he did in Exit Wounds, 1990), Patrol Officer Orin Boyd goes to jail to learn whether the prison-cell death of Police Commissioner David Trimble's son was a suicide or murder. And what a jail it is. Nicknamed the Honor Farm, the Nassau Country Correctional Facility at Sands Point is a former Gold Coast mansion that provides cushy containment for convicted police. With the exception of occasional shifts in the prison's slaughterhouse and a rare round of janitorial chores, the Honor Farm offers an almost comical regimen of nonstop rest and recreation for 20 crooked cops, many of whom know (and hate) Orin Boyd. And now is their chance to do something about it. As soon as the gates squeak shut on Boyd, who's agreed to be arrested and sent there as a cover for his investigation, his family finances are wiped out by a computer-hacking con who's chummy with some cops whom Boyd once arrested. Tommy Cotton, a corrupt senator Boyd humiliated during a traffic stop, tries to have Boyd beaten up. A creepy con named Harmless George goes after Boyd's wife, June, and another group of cons secretly launches a scam to buy the Farm. After one more apparent suicide, it's difficult to tell the schemers from the scammed as Boyd, a proud Vietnam vet blessed with equal helpings of brains and brawn, takes on all comers, uncovering a sad truth about crooked cops and the people who bend them to their will. A wry, street-smart, bare-knuckles, behind-bars brawl that bears up under a thick plot and a large cast of dirty denizens. Fans of the police procedurals of early Wambaugh and late McBain will delight in the gruff sensibilities of Westermann's heroes and the unregenerate sleaziness of his villains. -- Copyright ©1996, Kirkus Associates, LP. All rights reserved. --This text refers to an alternate kindle_edition edition.

After unwittingly assaulting a sleazebag senator, policeman Orin Boyd from Exit Wounds (Soho, 1990) receives a six-month sentence in a luxurious Long Island prison for cops gone wrong, where he investigates the supposed suicide of the police commissioner's only son. Another suicide, punitive manipulations by the senator's minions, attempts to steal loot scammed by Boyd years before, and threats to his family add to the suspense. Police procedural fans will like Westermann's forceful prose, natural wit, and constant action.
Copyright 1996 Reed Business Information, Inc. --This text refers to an alternate kindle_edition edition.

Westermann's protagonist, Long Island cop Orin Boyd, is a likable maniac. Nearing retirement, he has managed to never get promoted in a police force where virtually everyone is in charge of something. When Orin punches out a crooked state senator he finds assaulting a woman, the police commissioner has the tool he needs to investigate the Island's country-clubbish prison for bent cops. The commish's son, it seems, has died there, officially a suicide, just days before his scheduled release, and Orin becomes the Honor Farm's newest inmate. Orin, of course, has lots of enemies both on the farm and off, and before his undercover work is over, he is comparing his assignment to his Marine Corps stint at besieged Khe Sanh. Westermann is a talented storyteller. Perhaps more important, he's a real cop, and his mix of mordant humor, twisted cops, and Byzantine Long Island politics sounds like it could have come from the pages of Newsday as easily as from his imagination. The Honor Farm is a winner, and cop novel fans need to put Westermann's books on their required reading list. Thomas Gaughan --This text refers to an alternate kindle_edition edition.
Read more

3.3 out of 5 stars
3.3 out of 5
6 customer ratings
How does Amazon calculate star ratings?
Amazon calculates a product’s star ratings based on a machine learned model instead of a raw data average. The model takes into account factors including the age of a rating, whether the ratings are from verified purchasers, and factors that establish reviewer trustworthiness.
Top Reviews

Thomas Spruck
4.0 out of 5 stars A Good Read
Reviewed in the United States on December 28, 2008
Verified Purchase
This came quicky for a Christmas presant to me from my wife. I did ask her to get this book for a good author.
Read more
Helpful
Comment Report abuse

Chad M. Supp
4.0 out of 5 stars Beyond Expectations
Reviewed in the United States on April 13, 2001
I picked this book up at a wholesaler for three bucks. I recognized the author's name from the press for "Exit Wounds", the movie. Needless to say, my expectations were not very high. I was surprised at the depth of character and the layers of plot that Westermann is able to tool into this story. Of course, the hook is that the author has been a real cop for twenty years, but don't let that mislead you. It definitely shows in his writing that he knows his stuff, but Westermann is a true craftsman with words. His pacing, dialogue, and characters are directly on target, telling a story with minimalist narrative (ala James Ellroy). If Westermann was half as good at being a cop, as he is at writing about it, the streets should be very safe in his neighborhood.
Read more
One person found this helpful
Helpful
Comment Report abuse

Mary Ann Reed
1.0 out of 5 stars Pity the Poor Man Is Losing His Grip.
Reviewed in the United States on June 28, 2000
Through thick and thin I have tried to enjoy his work.However, I honestly feel its a performance expectation gap. Initially hip,savvy,quick witted turned into a rather traditional fuddy dud.Sorry, no sparks,no mystery and painfully angry for no valid reasons. Some times writers lose their way and try to run a marathon when all they do is sprint. I suggest a writer can be both. Turn it up a couple of notches Junior. mamreed@aol.com
Read more
Helpful
Comment Report abuse

Marc R. Slifkin
5.0 out of 5 stars Outstanding!
Reviewed in the United States on March 30, 2001
The perfect follow-on to Exit Wounds. John literally sucks you into the story; you feel Orin's pain, you absolutely hate Roger Smith, and you want to smack George Clarke in the back of his head. Very well written, very engrossing, couldn't put it down. Now, when does the movie come out? Thanks, John!
Read more
Helpful
Comment Report abuse

kristen kreis
5.0 out of 5 stars cops in jail;what could be better?
Reviewed in the United States on July 13, 2000
This cops-in-prison novel is the sequel to Exit Wounds, a classic cop novel now being made into a movie. Funny, nasty, interesting, sad. Killer dialogue. The Gold Coast estate setting makes it a prison story without the claustrophobia. I loved it.
Read more
Helpful
Comment Report abuse
See all reviews from the United States