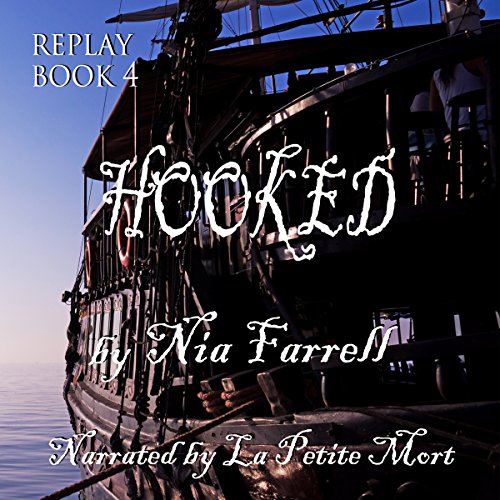 List Price: $6.95
You Save: $0.87 (13%)
By completing your purchase, you agree to Audible’s Conditions Of Use
Sold and delivered by Audible, an Amazon company
Share

Pandora Spocks
5.0 out of 5 stars Sexy Dominant Pirates? Yes, Please!
Reviewed in the United States on March 5, 2017
Verified Purchase
Gini was given a gift certificate for a weekend at Replay, the luxurious BDSM fantasy resort. She's been there before, and was humiliated when the object of her affections, ex-Navy SEAL and Replay security expert Marcus DeVos, abruptly stops their evening and sends her home alone. Though she feels abandoned and rejected by Marcus, the truth is that he's afraid of unleashing his demons on the woman he loves. When she agrees to a pirate weekend at the resort, who better to play Captain Hook than amputee Marcus? The result is hot, heartfelt, and inspiring.

I loved Hooked! I mean, who doesn't love sexy pirates, right? It's Book 4 of Nia Farrell's Replay series, and I wouldn't have missed it for the world. Hooked deals with some heavy issues like wounded warriors and PTSD, and it handles them skillfully and lovingly. FIVE BIG STARS!
Read more
One person found this helpful
Helpful
Report abuse

Rose Howse
5.0 out of 5 stars 5 STARS!
Reviewed in the United States on January 1, 2017
Verified Purchase
Well, I loved it, I knew I would, Nia Farrell never disappoints!
This is about Gini and Marcus and of course Rex is in the mix too.
Marcus has PTSD and found that BDSM helps him deal with that and his
sexual quirks too. Being an amputee, wearing a hook in his replay role of
Capt. Hook is a cute idea, I loved the closeness that developes with Marcus
Gini and the addition of Rex helps to make their story mesh with caring and
a deepening love.
Now to try and be patient waiting for Replay #5
Read more
One person found this helpful
Helpful
Report abuse

Brandi
5.0 out of 5 stars Pirates, very steamy scenes and one hot dom!
Reviewed in the United States on January 13, 2021
Marcus is a Veteran who lost a limb while serving his country and relies heavily upon his service dog Rex. Despite the lack of a hand, Marcus is a successful investigator who is also sexy, intelligent and a very demanding Dom. He is introduced to Gini, a petite librarian, whose intelligence and inner beauty catch Marcus off guard.

He doesn’t feel he’s good enough for her and tries to just remain friends despite the clawing feelings inside him that he must claim Gini as his own. Gini is very shy, but desires Marcus like nothing else in this world. Will they ever let their feelings for each other known to explore what they both desire? Will Gini get her chance with her sexy dom? All l can say is that we have another wonderful scene with pirates, realistic life experiences, some trauma bonding and some very hot scenes. You will mot be disappointed!!
Read more
Helpful
Report abuse

Energy Rae
5.0 out of 5 stars Raising Awareness in a Hot and Steamy Setting
Reviewed in the United States on January 4, 2017
I won this book in a FB book party. Having not known about the Replay series, and then reading the premise, I bought the first 3 books in the series so I could read them straight through, though each book is great as a standalone. This book brings us Marcus, an injured Veteran with PTSD and Gini, a petite and eager librarian. Gini receives a free weekend at Replay, from her friend Rowena, introduced earlier in the series. Replay, a BDSM roleplaying resort, specializes in historical time periods, being Pirate themed on the weekend Gini attends. Gini wants to learn more about BDSM and test her limits, and after years of pining after Marcus, she learns he is the Dom she is playing with for the weekend. We learn about Marcus, his PTSD, his service dog Rex and how Marcus navigates the world as a sufferer, and a new Dom. I love that Farrell incorporates such issues into her books, to raise awareness in a hot and steamy setting. My only disappointment is that the book ended so quickly. Am eager to read more about Marcus.
Read more
One person found this helpful
Helpful
Report abuse

Kindle Customer
5.0 out of 5 stars I'm Hooked!! Loved it!! I can't say it enough Amazing Series!
Reviewed in the United States on January 3, 2017
Replay a BDSM theme resort where the guest play in scenes of the past. Marcus Vos is a Ex Navy Seal who was injured while in combat. He suffers from PTSD and also has an amputation disability. He's also a Dominant.
Virginia Shelton our heroine had been given the opportunity to participate at Replay at a time of her choosing. When she decided to do so the theme would be Pirates
Author Nia Farrell has taken two character and made them so endearing, you will want them to have a HEA. She's given each a personal demon, to conquer to which you will find yourself willing them strength to do so. The sex is so much more than words can explain.
Read more
One person found this helpful
Helpful
Report abuse

zara
5.0 out of 5 stars Arc
Reviewed in the United States on March 17, 2018
Replay the exclusive BDSM club where sexy Marcus is a dom an he wants Gini for his sub.
Marcus has had his troubles but after time away and help with his ptsd dog Rex he is back on track and ready to go get his sub. Gini is given a birthday gift voucher for Replay and although she desperately wants to sub for her very own dom she is still unsure about going through with the pirate weekend that's planned. She dreams of Marcus being her dom but will her dreams come true!
Read more
Helpful
Report abuse

Tasha Talks Books Blog
5.0 out of 5 stars A definite recommended read
Reviewed in the United States on January 2, 2017
This is by far my favorite book of the Replay Series thus far. This has to do with a man who has PTSD and is missing his hand due from being n the Navy. Marcus made me fall in love with him, and I need me one in my life for sure. Marcus is head over heels with a woman, whom he was going to be with before, but his anxiety gets too high in compromising situations at times when his PTSD is going wild. He has a service dog that helps him stay calm and eases the anxiety of it. This book had me laughing, had me one handedly reading it, and then it had me in tears, then in love. It is an awesome story told.
Read more
Helpful
Report abuse

Sj
5.0 out of 5 stars Another amazing read
Reviewed in the United Kingdom on January 2, 2017
Verified Purchase
Nia has done it again with the 4th book in the replay series this time around the main character struggles with PTSD and is also an amputee and this is dealt with in a caring way also not to forget about the sex and there is plenty of it and hot looking forwars ro reading more
Read more
Report abuse
See all reviews
Back to top
Get to Know Us
Make Money with Us
Amazon Payment Products
Let Us Help You
EnglishChoose a language for shopping. United StatesChoose a country/region for shopping.
© 1996-2021, Amazon.com, Inc. or its affiliates