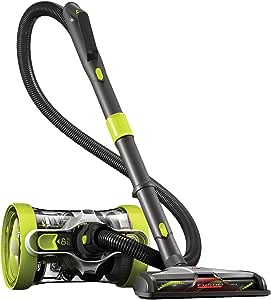 by Hoover
3.8 out of 5 stars 133 ratings
Currently unavailable.
We don't know when or if this item will be back in stock.

The Hoover air revolve multi-position canister vacuum gives you portable, continuous cleaning motion in every direction. Go from carpet to hard floors with WindTunnel 3 technology and powered floor nozzle for suction that lifts and removes surface debris and deep down embedded dirt. It's even designed to sit comfortably on each step while cleaning between floors. Navigate smoothly around furniture and corners. When you're done, just press the cord rewind to retract the cord in seconds.

3.8 out of 5 stars
3.8 out of 5
133 customer ratings
How does Amazon calculate star ratings?
Amazon calculates a product’s star ratings based on a machine learned model instead of a raw data average. The model takes into account factors including the age of a rating, whether the ratings are from verified purchasers, and factors that establish reviewer trustworthiness.

Jake&Jem
5.0 out of 5 stars The bad reviews are wrong!!
Reviewed in the United States on May 26, 2019
Verified Purchase
I really felt after seeing so many bad reviews I needed to write a review. I asked my husband which canister vac we should buy. I had three set aside in the cart. He really liked the looks of this one (so did I)despite the bad reviews and said let's try it, We can always return it if it's garbage. So I ordered it and yes we've only had it two days. However. It came with more cleaning tools than I've ever seen, and it has to be the sturdiest vacuum I have seen since i was a kid. Which is very important with a house full of boys. Even the dog is a boy..😶 well when this arrived I put it together in two minutes. My husband asked if he could use it after he saw the buffet of tools, and I said no of course, not until i try it. Well after 15 minutes I hollered up the steps. I'm done. Our bad luck again. It keeps shutting off. He came down and said, now can I try. So this man that has vacuumed less times than I can count on one hand in 13 years, quickly showed me that there is a shut off switch not only on the unit, but an additional on and off button on the top of the wand so don't have to keep bending over!! (So It was my fault because my hand kept hitting the second power button, there was nothing wrong with the vacuum)Then he pushed a piece on the handle and extended it so he could use it standing upright, which is a first ever as he is 6'4". Then he proceeded to show me every attachments uses, and cleaned the entire downstairs almost!! It did absolutely fantastic and after you know what your doing, cough, this unit is amazing!! I even got to go outside and garden😊!!!woohoo. So I left him and our 4year old to clean(4yr old Loves to clean) and figured, well if it can't stand up to daddy, baby and the dog in the first day out, then its junk. So I waited while gardening😊woohoo..to hear about the belt burning, the fatal clog, the handle snapping, the beater bar not working..it only spits dirt and pine needles out now, it's overheating..etc etc..these issues and more have happened to two other new, fairly pricey vacuums in a year and a half with these guys..😔but alas..not a single problem and the house got clean..for real clean. If you live with men, babies and a dog(s) or gravel, pine needles, dirt etc. This is your vacuum. Yes it takes getting used to having it follow behind you, but it's light enough to also carry along also, you can set it upright for awkward spaces and like I said it has a buffet of tools to clean everything. And it's pretty tough..ask the kiddo blocking you at every turn and trying to play hobby horse with it while the dog is growling and nipping at it..and your husband may find it cool and fun like mine did! Its a neat design:) Very happy!! Will update if anything changes. But i think we have finally found a great cleaning machine!!
Read more
87 people found this helpful
Helpful
Comment Report abuse

Jarrett S.
5.0 out of 5 stars Great Value
Reviewed in the United States on August 14, 2019
Verified Purchase
I read many mixed reviews and had some reservations. This vacuum is an excellent value. Great suction, easy to maneuver, long cord, tools for every need. It does an excellent job on hard floors and on carpets. Truly an excellent product and an excellent value.
Read more
26 people found this helpful
Helpful
Comment Report abuse

H-accord 2018
5.0 out of 5 stars versatile use for everyday use
Reviewed in the United States on January 18, 2019
Verified Purchase
over all its nice and i like how it works bit bulky for storage
Read more

Jose B. Acuna
5.0 out of 5 stars Great vacuum easy to clean.
Reviewed in the United States on July 26, 2019
Verified Purchase
Easy to use and stored.
Read more
16 people found this helpful
Helpful
Comment Report abuse

GS in indiana
5.0 out of 5 stars Easy use and efficient
Reviewed in the United States on July 28, 2019
Verified Purchase
I love this!! Just what I needed. My daughter borrowed it and I am not sure she will give it back#
Read more
12 people found this helpful
Helpful
Comment Report abuse

nichole mazur
1.0 out of 5 stars DO NOT BUY!!!!
Reviewed in the United States on June 10, 2019
Verified Purchase
DO NOT PURCHASE!!!!!!!! I would absolutely never recommend this product! I purchased this vacuum & tried it one time & didn’t like it. It would not work on my hardwood floors. I contacted the seller to return it & they would not cover shipping, it would be 120$ for me to ship it back, when I only purchased it for 80$. I never write reviews but I didn’t want any one to make the same mistake I did. It is not worth the money, it doesn’t work on hardwood floors even though it says it will!! And now I’m stuck with a vacuum I can’t use because I’m not paying for the shipping.
Read more
9 people found this helpful
Helpful
Comment Report abuse

Jake H.
4.0 out of 5 stars Ignore the bad reviews
Reviewed in the United States on August 2, 2019
Verified Purchase
You may have read a lot of conflicting reviews about this vacuum. This vacuum was made for people who live in small apartments who vacuum twice a month and don't have much storage space. For my life, for a lot of people's lives, this vacuum is perfect, powerful, functional, and doesn't take up a lot of space. The bad reviews are from idiot housewives who bought a small vacuum because it looked cool expecting it to work for years on their full-size houses with children and pets. If you're that person, of course this vacuum isn't going to last you. If you're a single 25 year old with a busy life living in an apartment, this is the vacuum for you.
Read more
5 people found this helpful
Helpful
Comment Report abuse

MC
5.0 out of 5 stars Good vacuum
Reviewed in the United States on June 16, 2019
Verified Purchase
Works as expected; is lightweight, and easy to move around
Read more
10 people found this helpful
Helpful
Comment Report abuse
See all reviews from the United States

Mandy Spiller
1.0 out of 5 stars Don't buy!
Reviewed in Canada on May 6, 2017
Verified Purchase
No it did not meet expectations. I'm not sure where to start. Power head not overly powerful...which I did expect for only $175.00 for this vacuum. Wheel doesn't turn, core reel button keeps getting stuck, canister release is hard to do back up.The filter doesn't want to stay in it's proper spot. And now my store smell like burning cause it just went pop pop smoke and shut off. Yes it looks cool....but that's about it. I will be call them asap if it wasn't Saturday I would be all over the phone call with them. AND....I HAVE ONLY USED THIS ABOUT 6 TIMES! VERY DISSAPOINTED.
Read more
2 people found this helpful
Helpful
Sending feedback...
Thank you for your feedback.
Sorry, we failed to record your vote. Please try again
Report abuse

Rob W.
2.0 out of 5 stars Three Stars
Reviewed in Canada on March 9, 2018
Verified Purchase
Seems a little cheap but It might last???? no its pure crap do not waste you money. My dust buster has more suction. DO NO BUY...
Read more
Helpful
Sending feedback...
Thank you for your feedback.
Sorry, we failed to record your vote. Please try again
Report abuse

Andrea Adair
1.0 out of 5 stars Needs work
Reviewed in Canada on September 21, 2017
Verified Purchase
This vacuum has a great concept but the design has some flaws. The power button and canister has already broke or jammed
Read more
Helpful
Sending feedback...
Thank you for your feedback.
Sorry, we failed to record your vote. Please try again
Report abuse
Load more international reviews

Page 1 of 1 Start overPage 1 of 1
This shopping feature will continue to load items when the Enter key is pressed. In order to navigate out of this carousel please use your heading shortcut key to navigate to the next or previous heading.
Back
Next
Pages with related products. See and discover other items: stair vacuum, stair vacuums, hoover vacuum filters, canister vacuum cleaners, Explore portable vacuum cleaners for homes