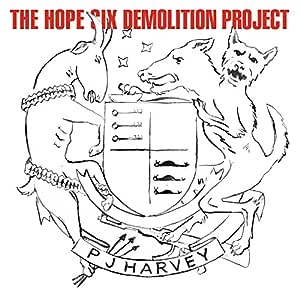 Secure transaction
Your transaction is secure
We work hard to protect your security and privacy. Our payment security system encrypts your information during transmission. We don’t share your credit card details with third-party sellers, and we don’t sell your information to others. Learn more
Details
Ships from
Amazon
Sold by
BNA Deals
Return policy: This item is returnable
In most cases, items shipped from Amazon.com may be returned for a full refund.
Read full return policy
The Hope Six Demolition P... has been added to your Cart

The Hope Six Demolition Project draws from several journeys undertaken by Harvey, who spent time in Kosovo, Afghanistan and Washington, D.C. over a four-year period. When I'm writing a song I visualise the entire scene. I can see the colours, I can tell the time of day, I can sense the mood, I can see the light changing, the shadows moving, everything in that picture. Gathering information from secondary sources felt too far removed for what I was trying to write about. I wanted to smell the air, feel the soil and meet the people of the countries I was fascinated with , says Harvey.

The album was recorded last year in residency at London s Somerset House. The exhibition, entitled Recording in Progress saw Harvey, her band, producers Flood and John Parish, and engineers working within a purpose-built recording studio behind one-way glass, observed throughout by public audiences.

4.5 out of 5 stars
4.5 out of 5
62 global ratings
How are ratings calculated?
To calculate the overall star rating and percentage breakdown by star, we don’t use a simple average. Instead, our system considers things like how recent a review is and if the reviewer bought the item on Amazon. It also analyzes reviews to verify trustworthiness.
Top reviews

Central Scrutinizer
5.0 out of 5 stars DC sucks, while PJ Harvey rocks
Reviewed in the United States on April 15, 2016
Verified Purchase
Some in the city--local pols and nonprofit types--erupted in outrage a few months back when the bouncy yet depressive guitar-rock opener, "The Community of Hope" was released on Youtube. Essentially, it didn't present the sunny view they wanted. "Drug town... zombies ... highway to death and destruction... They're gonna put a Walmart here," etc. That of course sparked predictable defense of PJ Harvey as a truth teller and defender of the lower denizens of the 99 percent.

But neither her detractors or defenders were really prepared to deal with the literary sophistication of her art. There's a Washington Post story you can look up online written by the (semi-clueless) WaPo reporter who drove Harvey around what he considered the mean streets. The song is basically the reporter's view of his city. Elsewhere, in an article... er, I mean song, about Afghanistan, are the lines "I used to think progress was being made, that we could get something right," and "I make no excuse, we got things wrong, but I believe we also did some good." Slightly awkward poetry? Again, these are quotes most likely from a military or international aid official, not necessarily Polly Jean Harvey's judgment on America's cities or its wars. In both cases, they're outsiders viewing devastation they don't quite understand, privileged and empowered yet paralyzed and unable to help. Harvey seems to show herself in the same light in the final track.

I've bought every PJ Harvey album soon after its release since the first, and with each--with perhaps the exception of Uh Huh Her--she has deepened her songwriting and lyric writing while making quantum leaps in terms of tonal palette. Her last one, "Let England Shake," was almost disorienting in its power on the first few listens. Stepping away from her home shores, the America-centric "Hope Six Demolition Project" is more back to basics, echoing the crash and thrash of her earliest two albums, but retaining some of the gloss and spookiness of later records. Her singing is mainly back in the lower, more natural register that prevailed on "Stories from the City..." The current album keeps the almost journalistic approach of "Let England Shake," albeit more stream of consciousness and impressionistic. It is a deep dive into the psychic and physical destruction, both at home and abroad, our culture has helped bring about, though it's not partisan or finger pointing or romanticizing of "noble savages" in any way. Good intentions don't always pan out. (Nor do all the songs--"Medicinals" is moderately engaging as a song but to my ear indulges in a lazy, particularly English kind of anti-Americanism that detracts from the album, while "Ministry of Social Affairs" is just sort of boring and inessential... just before the final two tracks come roaring back.) Having spent time in each of the places--Kosovo, Afghanistan, DC--she focuses on, her viewpoint is strong, grounded and valid. And more importantly, this is a great album.

3MTA3
5.0 out of 5 stars Perhaps not your first PJ purchase, but certainly a masterpiece.
Reviewed in the United States on October 25, 2016
Verified Purchase
Perhaps you expect your Artists to be perfect social commentators who sort out the unfathomable and deliver worldly truth. That's silly. An amazingly powerful album of first-person PJ's observations. Beautiful. Mature. Haunting. But then again, everything she does is genius.

If you're new to PJ, this might not be the first album to pick up. But the beauty of a musician (or any great creative force) like her is that it's another chapter in a variety of work that's always original. Picasso wasn't just a Cubist. Calder didn't Just make mobiles. Prince wasn't always about make-out music.
Read more
3 people found this helpful
Helpful
Report abuse

HLT
5.0 out of 5 stars At her best getting better and deeper in her work
Reviewed in the United States on August 9, 2016
Verified Purchase
At her best getting better and deeper in her work. Now, if only she would play more than 2 dates in the US. We have always shown her love and respect in Atlanta area. Back to the lp, thought White Chalik was a leap forward and now with Hope Six Project she reaches a mesmerising and intense boldness of artistry yet seen. There are not enough words, this is the far side of the river from her first release. You think a performer just can't get any better and then here comes PJ Harvey disproving the laws of modern music. Between her and Nick Cave the sense of artistic nobility remains strong. Ten stars, twenty...? Tour America again. It's been too long.
Read more
4 people found this helpful
Helpful
Report abuse

R. Berr
4.0 out of 5 stars Not my favorite album of hers
Reviewed in the United States on May 25, 2017
Verified Purchase
Not my favorite album of hers. Seems similar in style with her last one Let England Shake but not as good. Not sure what is missing. Saw her play most of the album in concert a couple weeks ago and that made me appreciate it more. PJ Harvey is a great artist and I have all her albums. I would not recommend this as the first one. Try Let England Shake or Stories from the City - Stories from the Sea if you have just discovered her.
Read more
One person found this helpful
Helpful
Report abuse

S. Bianco
5.0 out of 5 stars Different and I still love it.
Reviewed in the United States on May 28, 2018
Verified Purchase
it's not the PJ of 1992, that's for sure. Not even the PJ that sang Let England Shake. Different, but I still love it.
Read more
Helpful
Report abuse

Sean A. Heaney
4.0 out of 5 stars A History Class Act
Reviewed in the United States on June 18, 2016
Verified Purchase
The second Of PJ's History Albums. I admire both, but miss the fire & electricity of her best works.
Read more
4 people found this helpful
Helpful
Report abuse

KenX
5.0 out of 5 stars Hope 6 Demolition Project
Reviewed in the United States on March 15, 2017
Verified Purchase
I love p.j. harvey, and this, currently her latest effort, shows her in fine form, with strong songs.
Read more
2 people found this helpful
Helpful
Report abuse

robert l owen
2.0 out of 5 stars good songs horrible sound
Reviewed in the United States on August 3, 2017
Verified Purchase
love the music, in fact I saw her recent concert in Montreal. the problem is the sound quality of the vinyl. I buy a lot of LP's and this rates as one of the worst sounding records I own. the sound is flat, lifeless. in one word, horrible. this sort of problem cannot be good for her reputation. I should have returned it to Amazon for a refund but I waited too long.
Read more
Helpful
Report abuse
See all reviews

Neil T
4.0 out of 5 stars Good Overall
Reviewed in Canada on May 25, 2016
Verified Purchase
Plenty of good music on this record. The good songs are excellent, such as the wheel, and all of side A. However some tracks seem a bit directionless such as tracks 6-8.
Read more
Report abuse

Page 1 of 1 Start overPage 1 of 1
Previous page
Next page
Pages with related products. See and discover other items: iggy pop
Back to top
Get to Know Us
Make Money with Us
Amazon Payment Products
Let Us Help You
EnglishChoose a language for shopping. United StatesChoose a country/region for shopping.
© 1996-2021, Amazon.com, Inc. or its affiliates