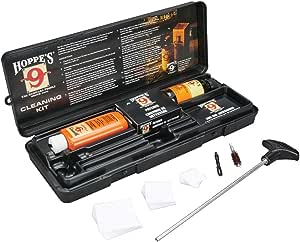 Brand: HOPPE'S
4.6 out of 5 stars 5,053 ratings
| 96 answered questions
Available at a lower price from other sellers that may not offer free Prime shipping.

Hoppe's No. 9 cleaning kit with aluminum rod is a pistol kit intended for .38/.357 caliber and 9mm pistols. Includes one 2 oz. bottle cleaning solvent and one 2-1/4 oz. lubricating oil. Brush for the intended caliber is included with this kit.

4.6 out of 5 stars
4.6 out of 5
5,053 global ratings
How are ratings calculated?
To calculate the overall star rating and percentage breakdown by star, we don’t use a simple average. Instead, our system considers things like how recent a review is and if the reviewer bought the item on Amazon. It also analyzes reviews to verify trustworthiness.

A. Ellis
5.0 out of 5 stars Great Starter Pistol Cleaning Kit
Reviewed in the United States on June 19, 2020
Verified Purchase
When I bought my first handgun after getting out the service, this is exactly what I bought for a starter kit. In this case, I bought this kit for my cousin who is a brand new firearm owner. Good for him!

This review is for new gun owners only. No sense in reviewing this for experienced shooters because you already know all this.

Hoppe's has been around a very long time and has a great reputation. This kit starts you off with a bottle of solvent which you use to clean stubborn gunpowder residue out of your barrel and other surfaces. You have a bore cleaning rod with attachable tip that holds the patches and attachable wire brush to clean extremely dirty barrels. Finally, you have oil to keep your moving parts lubricated and your firearm surfaces protected from corrosion.

Again, if you are new, this is all you need with the exception of Q-Tips, a rag, and an old toothbrush. You don't need to invest in a big complicated kit just yet. There are countless brands and products out there, but for those wondering what the heck you really need, this is it.

Important! --> I'm going to be Mother Hen for a minute. If you are a first time firearm owner, please for your protection and the protection of others, seek instruction for gun safety and proper shooting and cleaning procedures. I can't emphasize enough how important this is.

Sonny
5.0 out of 5 stars Exactly what I needed
Reviewed in the United States on November 1, 2017
Verified Purchase
This kit came exactly as I expected it to come. I had hoped for a pistol cleaning kit that was capable of functioning based on the inclosed components, solvents, etc.. I got exactly what I wanted. For the price you can't beat this, you go into the red if you try and buy everything enclosed individually. The case does everything it's suppose to do, it securely houses everything inside. I'm actually surprised at the amount of complaints about the case, it was $12. Yes the case has a thinner plastic housing, don't throw it down the stairs and you'll be fine. It's a kit for cleaning guns. Function over fashion kids, clean your pistol and enjoy the smell.
Read more

Comes in plastic container. Agreed with other reviewers that if you are to use this on a regular basis, find another container and throw away. I'd call this a "Storage box" lightly. The cardboard box it came in would last much longer than this box.

For the price of the oil, solution, patches and rod at $8.99-$12 alone, this was worth the price as a starter kit and to get started with proper maintenance of your gun.
Get a better bristle, slot, and knob end on your own. The plastic parts don't seem like they will last more than 5-10 cleanings.
Works with .380
Read more

Dr. S.
3.0 out of 5 stars An Uneven Set of Items
Reviewed in the United States on August 26, 2017
Verified Purchase
Actually, about two and a half stars would have been about right. This kit is a study in contrasts. The Hoppe's No. 9 solvent, oil, patches, and also the Tynex brush are all what they should be--solid, dependable items that get the job done well. The aluminum cleaning rod works and is adequate--though it's rather flimsy, even for aluminum. I have other aluminum cleaning rods that are basically like this one, and they are all sturdier than this rod. It did work, however; and it did not break or fail to do what it should do. But, it is unusually wobbly and does not inspire one's confidence in its durability. Next, boxed up with the Tynex brush are a rod end knob for running patches through the bore/barrel. This knob is (I'm pretty sure) plastic, which may last for some time, but the slotted rod end for patches, etc. is also plastic and seems destined for a short lifetime. I hope I am wrong on that. Finally, there is the plastic storage box which has a removable plastic tray with moldings shaped to hold the contents of the box in a specific way. It should prevent the items in the box from shifting and rattling around. The box is a point in the advertising for this kit. One reads that the kit is in a box and not in a clamshell. Well, I've never actually seen or held the clamshell model of this kit, but sight-unseen, I would bet that it could not be made of thinner, cheaper, flimsier plastic than this box with the tray in it. This box and its molded tray will give some service, but I would not again make a decision about purchasing this particular configuration of a kit based upon the thought that the plastic box would be of any great service. The box is bad, but the tray (despite its being molded to hold the items in the kit in a specific, orderly manner) is not going to last any longer than (if as long as) a cardboard setup. I have not gone back to look, but I'd say if the boxed set includes the same things as the clamshell assortment, and the boxed set costs more, I don't think that paying more is going to gain you much. None of my remarks, however, should be read to question the quality of the Hoppe's No. 9 cleaning materials themselves (solvent, oil, patches). Alone I would rate these items five stars without having to think twice.
Read more
49 people found this helpful
Helpful
Comment Report abuse

Jared G.
5.0 out of 5 stars Must Have Kit
Reviewed in the United States on December 11, 2017
Verified Purchase
This is a must have kit for any first time firearms owner. Contained within are the basic tools you will need to clean any type of 9mm or similar sized caliber pistol. Hoppes is an established name in the field of firearms and their cleaning products are really second to none for the price. The kit comes with bore cleaner, lubricant, about 40-50 (haven't counted) or so patches to apply cleaner with and dry with, and a brush. The kit is contained within a small rectangular box that does not take up much room and when you open it up it has instructions on how to generally clean pistols. This kit is really all you need to clean your guns and you wont even have to bust out the metal brush if you clean fairly frequently. The cool thing too about this kit is once you're out of any of the items you can just buy another replacement of that item and keep it within the kit all together. This is a must have for first time firearms owners and a great gift for anyone who currently has one.
Read more
31 people found this helpful
Helpful
Comment Report abuse
See all reviews

Page 1 of 1 Start overPage 1 of 1
This shopping feature will continue to load items when the Enter key is pressed. In order to navigate out of this carousel please use your heading shortcut key to navigate to the next or previous heading.
Back
Next
Pages with related products. See and discover other items: outdoor sporting goods, marine supplies