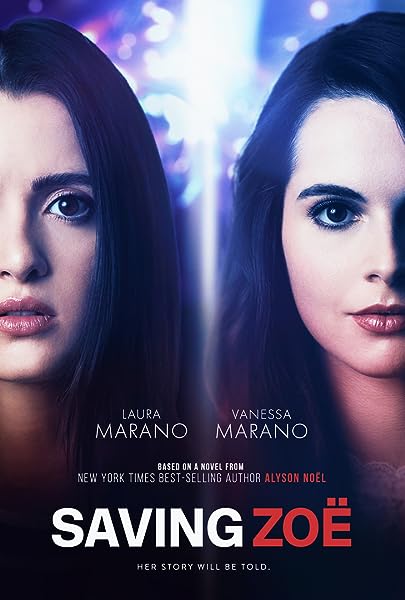 by Alyson Noël (Author)
4.8 out of 5 stars 46 ratings
See all formats and editions
Sorry, there was a problem loading this page. Try again.
Read more Read less
Previous page
Next page

“Noël does a terrific job of slowly unspooling secrets and motivations with writing that is both charismatic and spunky.” ―LA Times

“Fantastic characters and an amazing plot. Noël is a master with words. . .” ―Romantic Times (Top Pick!)

“Atmospheric and enjoyable . . . Noël's many fans will be eager to find out what happens next.” ―Publishers Weekly

“Two boys, one light and one dark, factor heavily into the intriguing, twisting story line, which is sure to draw Noël's numerous fans.” ―Booklist

Alyson Noël is the #1 New York Times bestselling, award-winning author of Faking 19, Art Geeks and Prom Queens, Laguna Cove, Fly Me to the Moon, Kiss & Blog, Saving Zoë, Cruel Summer, and the Immortals series including Evermore, Blue Moon, Shadowland, Dark Flame, and Night Star, as well as the Immortals spin-off series beginning with Radiance. With over 2 million copies in print in the US alone, her books have been published in 35 countries and have won awards including the National Reader's Choice Award, NYLA Book of Winter Award, NYPL Stuff for the Teenage, TeenReads Best Books of 2007, and Reviewer's Choice 2007 Top Ten, and have been chosen for the CBS Early Show's "Give the Gift of Reading" segment, and selected for Seventeen Magazine's "Hot List" and Beach Book Club Pick. She lives in Laguna Beach, California.
Tell the Publisher!
I'd like to read this book on Kindle

jenn0805
5.0 out of 5 stars Alyson Noel doesn't let you down with any of the books in this series! I loved it and the way she ended the series is awesome!
Reviewed in the United States on January 11, 2014
Verified Purchase
This is a fast paced original story that was a ton of fun to read and very hard to put down, lots of adventure with the right amount of romance and mystery :) can't wait to read what she comes out with next!
Read more
Helpful
Report abuse

Peggy Santarpia
5.0 out of 5 stars Hope, Love and Faith
Reviewed in the United States on December 2, 2013
Verified Purchase
Loved the last book of this series and everything was tied up in the end.
This is a wonderful love story that shows you why you should give up or lose hope.
Read more
Helpful
Report abuse

Karen DuBose
5.0 out of 5 stars 2 thumbs up
Reviewed in the United States on January 12, 2014
Verified Purchase
I love her books and this series is just as good as her others. I like how she can go from supernatural to the next with ease
Read more
Helpful
Report abuse

hayley macleod
5.0 out of 5 stars Absolutely fantastic.
Reviewed in the United States on December 7, 2013
Verified Purchase
I didn't think Alyson Noel could top mystic, but she has! Fantastic, exhilarating and totally unexpected. I loved the soul seekers books and I am really sad they are finished. If you haven't read all these books yet I would thuralley recommend reading them. All I can say is thank you alyson noël for being such a skilled writter as you are.
Read more
Helpful
Report abuse

Judie P. Huff
5.0 out of 5 stars I love these books
Reviewed in the United States on December 11, 2013
Verified Purchase
I love these books. I like all of Alyson Noel books. I am not a teen,in fact I am in the 70 yr.group.
Read more
Helpful
Report abuse

Paige
4.0 out of 5 stars A great finale to a surprisingly enjoyable series!
Reviewed in the United States on December 3, 2013
See more of my reviews on The YA Kitten! My copy was a hardcover I received from the publisher for review.

Very rarely does a series so completely change my mind as the Soul Seekers series had. Fated showed so much promise and yet failed to deliver on it, but Echo took some of those broken promises and mended them with Mystic doing more of the same. Horizon not only delivers the most promise of all four books but acts as a solid conclusion to a series full of diverse characters and a magic/mythos few others dare to try their hands at but that Noel uses well.

It's difficult to get a handle on these characters and their mindsets at first thanks to the unusually long six-month timeskip between the end of Mystic and the beginning of Horizon, but once Dace makes his move toward the side of the Richters for his own reasons, the heat is on and the book never slows down. Not even unnecessary chapters told from the POVs of Lita and Xotichl, whose voices often blend together with Daire's and Dace's because there isn't enough differentiation between them, are enough to stop the book from charging on toward the grand battle for Enchantment and the three worlds.

Something funny about this series is the fact Daire and her friends regularly bumble right into the enemy's hands, but they always win out in the end. There is usually some sacrifice, yes, but they come out surprisingly well for it and manage to just barely avoid defeat so they can keep fighting and keep good's light burning on. Just as it has happened in the last few books, it happens again here and Cade of all people is the one to help them achieve their victory this time. Let's just say Dace wasn't the only one affected by the piece of darkness he took from Cade.

The climactic fight takes up almost half the book, if you can believe it. And it works! That lengthy battle is exactly why the novel moves at such a breakneck pace. Once everyone slides their pieces into place and they go to the Rabbit Hole for the grand re-opening, all hell breaks loose as monsters come out to play and all three worlds are affected. So much of importance happens in all these pages that it's difficult to list them all! Then all that fighting and death turns into a happy ending for just about everyone who has earned it once the battle is over.

At first, the ending seems too sweet and HEA-ish. Good suffers few losses that mostly turn out to be Disney Deaths and they're going around claiming evil has been eradicated, which doesn't quite ring true with this series or with the entire structure of the good vs. evil battle the novel set u. Then one character walks in to remind us evil is far from gone and will never be gone because dark without light or light without dark is impossible. That law is why Daire exists, so it not applying to evil would be too disingenuous. This is the end of Daire's story, but this is far from the end of her work--and that is just how it should be on both counts. If you're willing to get through a bad first book to get to some really entertaining stuff, the Soul Seekers series will deliver on its promises.
Read more
Helpful
Report abuse
See all reviews

TJ M.
4.0 out of 5 stars Brilliant
Reviewed in the United Kingdom on July 5, 2017
Verified Purchase
I love these books there's plenty of romance and lots of twists . its perfect for me , as an adult dyslexic it can be hard to find books I can read easily enough for pleasure but that I still find stimulating and mature enough to not be bored this is a perfect balance for me mature enough content but easy reading. A thoroughly good read
Read more
Report abuse

M. Leonard
5.0 out of 5 stars Really good book series!
Reviewed in the United Kingdom on June 14, 2014
Verified Purchase
I love Alyson Noel as an author this series of books hasn't disappointed me. Fast paced full of action and a good read. Had me enthralled throughout as all of her books do!
Read more
One person found this helpful
Report abuse

Marie Smith
5.0 out of 5 stars Good Read
Reviewed in the United Kingdom on January 24, 2014
Verified Purchase
Purchased all 4 books (in the series) as presents for my daughter, who really enjoyed reading them. Delivery very quick, will use again.
Read more
Report abuse