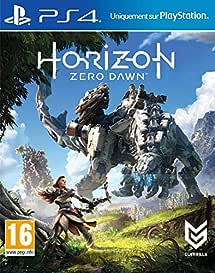 Embark on a compelling, emotional journey and unravel mysteries of tribal societies, ancient artifacts and advanced technologies that will determine the fate of this planet, and of life itself.

Take on the role of skilled hunter Aloy as you explore a lush world inhabited by mysterious mechanized creatures in an exhilarating new Action/RPG exclusively for the PlayStation4 System.

4.7 out of 5 stars
4.7 out of 5
3,215 global ratings
How are ratings calculated?
To calculate the overall star rating and percentage breakdown by star, we don’t use a simple average. Instead, our system considers things like how recent a review is and if the reviewer bought the item on Amazon. It also analyzes reviews to verify trustworthiness.

RL
1.0 out of 5 stars Leftist garbage, very repetitive, not fun
Reviewed in the United States on January 14, 2019
Verified Purchase
I was annoyed from the start that every good person in this story is a woman, and every bad person is a man. My main character was born in a beautiful peaceful loving world where women rule our tribe, but the bad men out there from other tribes are making life bad for us. Go fix it.

Apparently there can be no bad women. This is not realistic in any way. I played for about 30 hours, so if they introduce evil women at any point, it must come after that.

An evil (or incompetent?) man led an evil corporation to make evil robots that destroyed the world. Luckily there was a brilliant, brave woman who was smarter and better than him to come in and clean up his mess. The story could have been dreamed up by any sophomore gender studies college student (and probably was). How come corporations are always the evil entities in games like this - how about leftist dictators that have killed tens of millions of people and destroyed the lives of hundreds of millions more like Stalin, Mao, Lenin, Pol Pot, etc?

That's the overarching context of the story. The gameplay itself is not that fun. Waaaay too much senseless crafting. No good NUXs. The thing about fighting machines with different weakpoints by using different weapons is novel, but actually super tedious and annoying in the middle of battle.

"Oh, which machine is this? What are its weakpoints? Let me pause and open up the notebook to study it once again. What the hell is it called - a strongmaw??? Ok. Oh I need such-and-such arrow types and such-and-such traps. Ok now I'm unpaused. Crap I have to spend 5 minutes hitting d-pad left to find the right trap to set, spin up my weapon wheel thingy via R1 to get the right arrow types, make sure i actually hit the right component with the right arrow type because it has different components that need different arrows and which was which?? I better use my focus to distinguish this (or re-pause to read about it again), etc. Oh there are 5 of this machine and 5 other types of machines? What are their weaknesses again?? Oh crap they're about to kill me, let me d-pad left away from the proper traps over to the right potions to heal or protect me before I die."

Rinse and repeat. Story sucks, is basic leftist garbage and way too complicated at the same time, and anything fun in the gameplay is not fun the 100th time you do it.

Ray
3.0 out of 5 stars Beautiful but boring: sorta like your crush in high school...
Reviewed in the United States on December 14, 2018
Verified Purchase
Whoever said "beauty is only skin deep" (Sir Thomas Overbury by the way-you're welcome) probably wasn't talking about HZD, but he may as well have been. This is one of the most gorgeous console games of all time, but also one of the dullest to actually play. And by 'play' I mean skulk around in the bushes, either giving yourself a headache due to constantly having to activate Alloy's damn X-Ray vision, or hitting walking metal dino-tanks with a...stick.

Yep, that's right boys and girls, because the best way to take out a giant, malevolent, armored killing machine, is to...wait for it, hit it with a stick! Oh I know what you're saying, hey noob, you're actually supposed to shoot the titanium T-Rexs by using...wait for it again, your bow and arrow. Yes, because the only thing more effective than whacking a cobalt crocodile with a broomstick is going all Robin Hood on its aluminum ass. I wonder if there were any archers in WW2. That's what must've taken out all those damn Panzers. Where's my rocket launcher Guerrilla Games, it's in your name you know, guerrilla warfare. How about a laser thing? When The Last of Us gave Ellie the bow and arrow late in the game, it announced the passage of time, and introduced a whole new dramatic and gameplay element. With HZD, it's just lazy. And speaking of which, the game is basically The Witcher 3, without the immersive world, interesting sidequests, memorable characters, or engaging gameplay.

I was a real fan of Killzone 2 and especially 3, there the gameplay was king. Here, they try to do much. In trying to be an open world, action rpg epic killer app for the PS4, the game succeeds only intermittently. As a tech demo, it is peerless, and a sign that developers have only scratched the surface of what this gen is capable of. As a living, breathing, believable world, I am not so sure. Grossly overrated at launch, I don't think future retrospectives will be as glowing. Here's hoping HZD2 will be the real deal.
Read more
12 people found this helpful
Helpful
Comment Report abuse

Seriously though this is truly a fantastic game. Each of the robots you encounter require a different strategy to effectively take them out. While you can get better gear and skills, the leveling system in the game doesn't make you overpowered at any point, so if you don't go into a fight with a plan you can get overwhelmed pretty quickly. The story itself is enjoyable if a little predictable.

Also if you've got a daughter that could use a video game hero Aloy is a great choice. She's a strong woman that doesn't wear "bimbo" armor, and she doesn't take any nonsense from anyone along the way.
Read more
16 people found this helpful
Helpful
Comment Report abuse
See all reviews

Shabba
5.0 out of 5 stars Beautiful
Reviewed in the United Kingdom on February 17, 2020
Verified Purchase
Absolutely stunning game. One of the best looking one on PS4 if not the best, revolutionising rendering on it. The game play is nothing new. The same evolving weaponry and leveling up character kinda game it is what we have seen in probably all other games. The music also fantastically suits the ever changing environment from friendly to sinister. Quite a long game I think so I guess I'll put over 100 hours in it.
Read more
Report abuse

Page 1 of 1 Start overPage 1 of 1
This shopping feature will continue to load items when the Enter key is pressed. In order to navigate out of this carousel please use your heading shortcut key to navigate to the next or previous heading.
Back
Next
Pages with related products. See and discover other items: video console system, collector's edition game, playstation vr games, ps4 games in video games, playstation 4 games, PS4 Games Under 20 Dollars