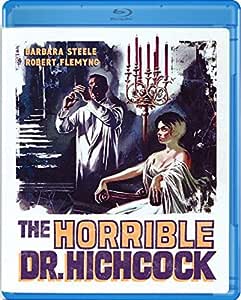 Add to Cart
$22.40
& FREE Shipping on eligible orders. Details
Sold by: Amazon.com
Have one to sell?
Sell on Amazon

Remarrying years later, the doctor s new bride Cynthia (Barbara Steele, Pit and the Pendulum) is unaware that her husband intends to use her blood to reanimate the corpse of his dearly departed Margaret."

4.0 out of 5 stars
4 out of 5
41 customer ratings
How does Amazon calculate star ratings?
Amazon calculates a product’s star ratings based on a machine learned model instead of a raw data average. The model takes into account factors including the age of a rating, whether the ratings are from verified purchasers, and factors that establish reviewer trustworthiness.

Jay Woelfel
4.0 out of 5 stars Important film finally available in watchable form.
Reviewed in the United States on March 8, 2016
Verified Purchase
The best version of this film currently available. The prints is in good shape and the widescreen anamorphic 16 by 9 is good too. Colors are vivid and this film's vivid use of color inspired Dario Argento--who sites this director as being more of an influence on him than Mario Bava. Though this isn't blu ray--I have seen the OLIVE release blu ray and this version looks nearly as good, sounds much better, and is far less cut up-- The quality in this release is so much better than previous crappy looking versions that, for now, this is the way to see this movie. I liked it so much better finally seeing this decent DVD that it was like seeing the film for the first time. This version seems to be uncut or any cuts made to it were done professionally as there aren't any jumps in the fine music score or anything too obvious. This is a relatively early horror film so you shouldn't expect lots of nudity or bloodshed. The necrophilia aspects of this are solidly implied.

This is one of those key films in Italian horror cinema. DVD also includes trailers for some other Italian films and some of these are also widescreen. Yes it is a DVDr but they give you a good product at a decent price. Now if only someone, or they, would do an equally good version of the follow up film by this same team THE GHOST.

Amazon Customer
5.0 out of 5 stars Video Dimensions official DVD release has very good image quality with true rich colors.
Reviewed in the United States on October 11, 2016
Verified Purchase
Contrary to the what the reviewer "Rae" said, the Video Dimensions release is NOT a DVD-R. It is a bona fide DVD release. It says this both on the case artwork and on the DVD itself. The DVD topside has a nice photo from the movie imprinted on it - very professionally done. Unfortunately I have not seen the Olive Films Blu-Ray so I can't compare image quality of the two releases (I won't buy the Olive version because it is the American edit which is cut to 77 minutes). But I wholeheartedly agree with other reviewers who said that for a DVD the Video Dimensions release features very good image quality with nice color balancing, certainly WAY better than previous versions and bootlegs. The run time is 86.5 minutes. They advertise it as "Uncut," which I suspect means it is the entire UK cut of the film. Phil Hardy lists the runtime of the original Italian version as being 88 minutes, so at most the Video Dimensions release is only missing 1.5 minutes of footage. Not bad! Recommended.
Read more
13 people found this helpful
Helpful
Comment Report abuse

Offenbach
3.0 out of 5 stars Two versions: same Dr. Hichcock
Reviewed in the United States on May 10, 2019
Verified Purchase
As I think other reviewers have mentioned, this is the OliveFilms version of 77 minutes. In comparing this version to the overseas edit, "The Terror of Dr. Hichcock," that I have on VHS tape - which is, I believe, rated at 84 minutes - the only major difference I noted was in the very beginning. In "The Terror of Dr. Hichcock," the movie starts with the film credits - titling the film, incidentally, "Raptus" - then proceeds to the beginning, with our "good" doctor knocking out the gravedigger before proceeding to open the coffin containing a young woman. In "The Horrible Dr. Hichcock," the movie starts right in with the graveyard scene, and only after that is completed does it show the credits, which are shorter, containing no mention of "Raptus." I detected no differences in the scenes of Dr. Hichcock fondling the corpse in the cemetery, or later his unconscious wife Margaretha, or still later the body in the morgue. "Horrible" does seem to have some quicker take-a-ways from one scene to another, which serves to mildly increase the pace. I didn't notice any other changes that could account for an alleged 7 minute difference in the two versions. The biggest difference to me was in the picture quality. Granted, this is a bit unfair because I'm comparing a DVD to a VHS tape, but the source print of the former was certainly sharper, if also darker at times. It was great to finally see all the Victorian colors in their intended glory, and see the "Horror of Dr. Hichcock" etched on the the strange, beautiful face of Barbara Steele. The biggest disappointment was in the sound: the quality between the two is about the same. Overall, I thought I would be disappointed in the DVD version because I had supposed that the seven minute difference would be reflected in key scenes being edited out. They aren't. As such, I recommend this DVD version because of the tight editing and good picture quality.
Read more
2 people found this helpful
Helpful
Comment Report abuse

MarilynLover
4.0 out of 5 stars ~ Olive Films Blu-ray Edition is the (76:48) length movie. Looks good, no theatrical trailer as expected from this company ~
Reviewed in the United States on November 28, 2017
Verified Purchase
Alright, here we are with another "Olive Films" Blu-ray edition. The movie print they used looks good for the age of the movie, etc.
I like the movie and the "Doctor" played here is one sick puppy. He can't stand the idea of his beloved Margaret being buried in the ground, so what does he do? He goes to the cemetery where she is about to be buried by the caretaker and literally gets her body back out of the coffin, fondling it before he does.
As I have stated in my other reviews, "Olive Films" has zero special features and that is sad, to say the least.
I am sure there is a theatrical trailer out there for this movie if they looked for it AND the movie runs (76:48) in length from opening to end.
So any of you thinking of buying this edition, it looks good, but it is not the extended version of 83 minutes as some reviewers have stated.
The only features the MENU has to offer are CHAPTER SEARCH and ENGLISH SUBTITLES.
Comes with an Olive Films Mini catalog inside also.

I would look around for a good deal on this one, if you really want it on HD Blu-ray. The print does look good on the Ultra 4K TV, but it isn't as sharp as some of her black and white movies on Blu-ray.

Chumango
4.0 out of 5 stars Good DVD transfer of this gothic tale
Reviewed in the United States on April 15, 2012
Verified Purchase
A nice Ricardo Fredda, gothic tale about a mad physician obsessed with his dead wife and keeping her alive. In the middle of all this, he marries our beautiful Barbara Steele, who becomes suspicious until she eventually finds out. To the fans of our gothic queen, this is probably her prettiest look ever. The cover is a bit deceptive as she does not shoot the mad guy.

Technically, a surprisingly clear DVD transfer by Video Dimensions. The aspect ratio seems to be widescreen. This feature runs for 83 minutes as advertised. Two or three scenes seem to be cut in their original length, so we may have an extended version in the future. Audio is in English and no subtitles are provided. As extras, you will get about 6 trailers of other b-horror movies, including Doctor Butcher M.D.
Read more
28 people found this helpful
Helpful
Comment Report abuse
See all reviews from the United States

Levent Uzunoglu
3.0 out of 5 stars CUT VERSION.
Reviewed in the United Kingdom on March 27, 2017
Verified Purchase
The film is ok,unfortunately,it is cut/censored by about 12 minutes.
Read more
7 people found this helpful
Helpful
Sending feedback...
Thank you for your feedback.
Sorry, we failed to record your vote. Please try again
Report abuse

Colin Craig
5.0 out of 5 stars Shocking and sublime
Reviewed in the United Kingdom on June 25, 2017
Verified Purchase
This is the first time I have viewed this film with an English sound track. It loses nothing in the translation.

The description on the DVD outlines the story, which is remarkably frank for the time (or even now), but nothing will prepare you for the oppressive atmosphere the film creates. This is 'proper' horror cinema. The acting is played straight which adds to the doomladen effect. I don't wish to give anything away, so will simply note that one scene is genuinely horrifying in this very disturbing movie.
Read more
Helpful
Sending feedback...
Thank you for your feedback.
Sorry, we failed to record your vote. Please try again
Report abuse

Jean-paul N. Mertens
5.0 out of 5 stars I give this one five stars.
Reviewed in Canada on August 31, 2019
Verified Purchase
I enjoyed this film from the beginning to end. I am a great Barbara Steel fan. She really fills the mold of a horror classic actress. I highly recommend this gem of a DVD.
Read more
One person found this helpful
Helpful
Sending feedback...
Thank you for your feedback.
Sorry, we failed to record your vote. Please try again
Report abuse