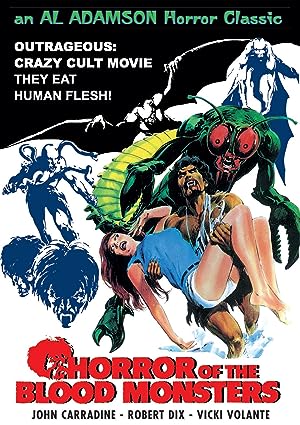 Horror of the Blood Monsters

(30)3.11 h 25 min1970ALL
One of cult movie director Al Adamson's most popular films, known for its use of weird color effects by "Spectrum-X," stars horror icon John Carradine as scientist Dr. Rynning, who leads a space journey to a distant planet of blood-sucking vampires intent on contaminating Earth. While exploring the planet, the crew becomes entrapped by warring tribes of primitive vampire-like men and, in order to escape bloody death, must battle snake-men, bat-demons, and the other hideous denizens of this evil world!

EinsatzReviewed in the United States on February 19, 2015
5.0 out of 5 stars"Bob. Be honest. What are our chances?"
Verified purchase
This is a multicolored weird-fest about vampires here and abroad (outer space). There's a hilarious introduction detailing the many assaults on Earthlings by a cult of vampires. They establish a pattern of violence with a few brief scenes of vampires (who are very-very long in the tooth) attacking people in the dead of night. This ends abruptly, dumping us at control central where a launch is about to take place. That incomparable character actor John Carradine is leading a crew into the nether regions of space and beyond. Once under way they quickly loose contact and then they hit something or something hits them and wouldn't you know it, they have to land their model spacecraft on an unknown planet of many hues for some much needed repairs. I believe they blamed it on a solar disturbance but it looked like pretty rough animation to me. (The funniest part of this sequence is the worry over their oxygen supply as one of the crew calmly smokes.) But what luck, the planet may look weird but it's almost earthlike!!! Sure, it tends to look a little green at times, yellow too, red now and then, before it goes blue. As they're exploring, they quickly find prehistoric creatures and some unconvincing vampire cavemen. Meanwhile, back on Earth, the two launch controllers are having electronic sex. Twice. Have I mentioned the flying bat people yet?
I don't know who their editor was but it looked as if he cut the film with an axe. My goodness me, what a fabulously awful sci-fi flick. It's beyond ridiculous. And the fight sequences!!!! Sadly, one of the crew doesn't make it off the planet. Did I mention that the vampire cavemen had some mighty big spears?

Bless their hearts for even trying. A great effort for a fifth grade art class. Good job.

Robert I. HedgesReviewed in the United States on February 23, 2004
5.0 out of 5 starsRecipe: Place Two Movies In Blender. Press Mix Button.
Verified purchase
Al Adamson is one of the all time greats in the ridiculously bad horror movie genre. "Horror of the Blood Monsters" is basically a movie from the Philippines called "Tagani", with a whole additional plot wrapped around it featuring a scenery-chewing performance by John Carradine in a space ship.
In the beginning of the film you will be led to believe that the movie is about vampirism, but it is actually more of a journey into space so realistic you'll swear you are watching the NASA channel. OK, seriously, the scientific expedition which may remind you of the much earlier "Rocketship X-M", is so outrageously hokey that you will not be able to stop rolling around on the floor laughing. The expedition is led by John Carradine and two other guys named Willy and Bob. They have some sort of accident which forces them to land on this planet (which looks suspiciously like a globe of the Earth) filled with every sci-fi cliche known to man: beautiful cave women in bathing suits, cavemen with big teeth (the alleged connection to the vampire introduction), flying monkey (bat?) creatures on visible wires, lobstermen vulnerable to primitive wrestling holds, shots of two pet store size lizards wrestling as if they were dinosaurs, etc. None of that is that remarkable, but it was filmed in "Demonic Color" according to the box, which symbolizes the deadly 'chromic radiation' that endangers them all. Actually it is a filter making entire scenes look red, yellow, green, or blue. You will just love the 'special effects'.
The cast is perfect for the film and all engage in their individual pieces of rank melodrama with gusto, led of course, by the all time champion grumpy-old-man, John Carradine. This would have made an excellent MST3K. They just don't make movies like this anymore, which is a shame. This is one of Al Adamson's best (by which I actually mean worst), and I highly recommend it to bad movie buffs anywhere!
7 people found this helpful
Report abuse

kjpcReviewed in the United States on July 7, 2010
4.0 out of 5 starshow can so bad be so good
Verified purchase
oh my, where do you begin with a movie like this? The old black and white science fiction horror movies had a certain charm, the dated cars and the kids' slang as they make out in the woods while the flying saucer lands....some of them were quite good, actually, with sensible plots and characters you could empathize with and care about.....this film has none of these attributes. Not only is the nostalgic charm nonexistent, but the scenery is choppy, erratic, very annoying.....high school kids could put together a better movie....and the characters are such non-descript, pointless people, you just don't care. you have to see it to believe it....but this concoction of drunken editing is fun to watch. It makes no sense. It is so bad it has to be one of the worst films ever made. I recommend it. I can't wait to watch it again.
6 people found this helpful
Report abuse

J. LarraldeReviewed in the United States on February 14, 2018
2.0 out of 5 starsSo Bad It’s Bad
Verified purchase
Can’t say I was too thrilled with this one, but I knew what I was getting into beforehand and I like most bad movies (thanks, mst3k! Lol) that I watch. However, this one couldn’t keep my attention after the first 15 minutes. It’s just boring with no effort put in. The cover art is way more entertaining than the movie. Lol!
One person found this helpful
Report abuse

thomas mooreReviewed in the United States on April 25, 2017
5.0 out of 5 starsprepare for disappointment. But
Verified purchase
What can I say , it is what it is . If you are looking for a competitor to star wars , prepare for disappointment . But , if you are looking for something of a satire of the same , this is it . Some might say its so bad its good . If I may refer to Sam Shermans commentary tract , through a( stiff frozen corpse) in the oven under low heat , watch the movie , perhaps again with said commentary and dinner should be about done.
One person found this helpful
Report abuse