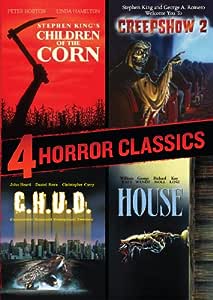 FOUR CLASSIC HORROR FILMS IN ONE SPECIAL COLLECTION! CHILDREN OF THE CORN (1985, 92 Mins.): A young couple (Linda Hamilton, Terminator 2, and Peter Horton, thirtysomething) find themselves stranded in the rural town of Gatlin, Neb., where they encounter a mysterious religious sect of children. But nowhere in town are there any adults. The horror grows to a blood-curdling climax as the two new visitors learn the horrifying secret behind the prospering corn fields. CREEPSHOW 2 (1986, 92 Mins.): The rotting Creep himself is back with three new gruesome tales of horror that will make your skin crawl: a cigar store wooden Indian comes to life to avenge the store owner's brutal murder at the hands of three punks in Ol’ Chief Woodenhead. Then four teenagers become the target of a terrifying, man-eating oil slick in The Raft. The chills continue with The Hitchhiker, the chilling tale of a woman who keeps running into, and over, the same mutilated man on a lonely road. Prepare for a terrifying roller coaster ride from the masters of horror! HOUSE (1986, 93 Mins.): Horror novelist Roger Cobb is a man on the edge, reeling from his recent divorce, haunted by the mysterious disappearance of his young son, and struggling with his new book about his traumatic experiences in Vietnam. But when he moves into the strange house left to him by his late aunt, Roger’s precarious sanity comes under siege by nightmares of his dead war buddy, visits from a nosy neighbor, and an onslaught of hideous creatures from another dimension. Horror has found a new home, and it’s fully furnished with murder, monsters and madness! C.H.U.D. (1984, 96 Mins.): Beneath the streets of New York city, there are hundreds of miles of subterranean tunnels unfit for anything human, unauthorized for anything experimental and unlikely to come to the surface...until now. Something horrible is loose in the sewers of Manhattan, and the city’s homeless population has begun to mutate into ‘Cannibalistic Humanoid Underground Dwellers.’ They are C.H.U.D. - hideous, hungry and headed for the streets!

4.6 out of 5 stars
4.6 out of 5
59 customer ratings
How does Amazon calculate star ratings?
Amazon calculates a product’s star ratings based on a machine learned model instead of a raw data average. The model takes into account factors including the age of a rating, whether the ratings are from verified purchasers, and factors that establish reviewer trustworthiness.
Top reviews

R. Boswell
5.0 out of 5 stars I Love The 80's Horror Movies!
Reviewed in the United States on September 30, 2014
Verified Purchase
I loved these movies! I especially liked Children of the Corn & C.H.U.D, both were excellent...Creepshow 2 & House were not as good, but still watchable. I saw all of these movies when they first came out in the theaters, it was a real treat to view again. The 80's were my favorite period for horror movies, some of them were cheesy but most all of them had their good qualities (and bad!) and were all enjoyable in their own way. The 80's movies rule!
Read more
3 people found this helpful
Helpful
Comment Report abuse

Amazon Customer
4.0 out of 5 stars 4 pack DVD with creepshow 2 and house
Reviewed in the United States on August 18, 2018
Verified Purchase
I bought this for Creepshow 2 and House. Children of the Corn is a bonus for those that haven't seen the movie or don't already own it. Chud is a bit of a hit or miss
Read more
One person found this helpful
Helpful
Comment Report abuse

James
5.0 out of 5 stars Great value...
Reviewed in the United States on August 20, 2017
Verified Purchase
Four good to great 1980s horror flicks for under ten bucks, can't beat that. I picked up mostly for CHUD and Creepshow 2, since its been had been a few years since I revisited. Its packaged as two movies to a disc in the set. The video quality looks good, especially for the great price.
Read more
Helpful
Comment Report abuse

joyce robles
5.0 out of 5 stars Great deal.
Reviewed in the United States on May 7, 2018
Verified Purchase
I have been looking for CHUD for sometime and getting this pack, at the time I purchased it, was cheaper then just buying the film alone. Great deal.
Read more
Helpful
Comment Report abuse

John s
5.0 out of 5 stars Great movies for a great price
Reviewed in the United States on June 8, 2019
Verified Purchase
Came in great shape and on time not late at all great price for a great product I'm happy!
Read more
Helpful
Comment Report abuse

Deno
5.0 out of 5 stars Check everything now.
Reviewed in the United States on November 25, 2019
Verified Purchase
On time works fine from what we can tell.
As with all of our online purchases we watched the movie we wanted and FF trough the others to check them within the first 30 days. We check all items when received. No giving defective gifts. Playing with grandkids toys tonight.

Page 1 of 1 Start overPage 1 of 1
This shopping feature will continue to load items when the Enter key is pressed. In order to navigate out of this carousel please use your heading shortcut key to navigate to the next or previous heading.
Back
Next
Pages with related products. See and discover other items: william katt