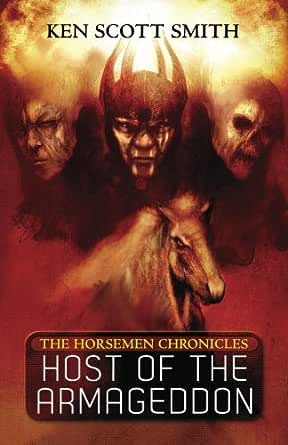 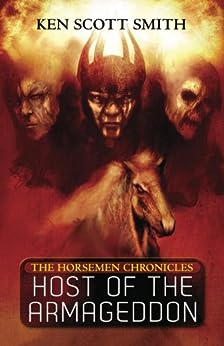 Host of the Armageddon (The Horsemen Chronicles Book 1) Kindle Edition

Stacks of comics and episodes of Star Trek: The Original Series and The Twilight Zone paved the way for Ken’s vivid imagination. And while the Avengers, Captain Kirk, and Rod Serling were not ideal role models, his creative writing juices were flowing. His love of science fiction and fantasy led to a career in the laboratory, where he conducted experiments and published results as a research scientist. After earning a master’s degree in business, he racked up thousands of frequent-flyer miles as a marketing executive and did consulting for the biopharmaceutical industry. But amidst the business proposals and annual reports sat War of the Oaks and Symphony of Ages, among others, nuggets of inspiration and the fodder for fantasy adventures. Ken lives in the Bay Area with his wife and two children. He enjoys attending sci-fi and fantasy conventions, often in costume, mingling with science fiction and fantasy fans and letting his geek flag fly. --This text refers to the paperback edition.

Russ
5.0 out of 5 stars WOW!!
Reviewed in the United States on April 2, 2015
Verified Purchase
Host of the Armageddon is outside the normal genre of books I read. I'm not a big fan of science fiction, but I picked up this book on Amazon based on a recommendation from a friend. For $3.99 it was worth the risk. I have to say, I was completely blown away. The first chapter starts off a little slow, but does a good job of setting the stage. Chapter 2 brings it into modern times and the book really takes off from there without ever letting off the gas. It's a true page turner, and I stayed up much later than I wanted on numerous nights, because I always felt like I had to read just one more chapter.

I really enjoy a book with a strong female character and Ken Scott Smith captures this with his portrayal of Faye. Like all the men she encounters, I also couldn't help but fall in love with her. There's a really nice blend of ancient biblical aspects set in modern times, and I love the portrayal of the Horsemen of the Apocalypse. They have super human powers and are immortal, yet they are limited by their need to possess a human form and they hold many human characteristics. Like watching a den of thieves, it is interesting to see the Horsemen quarrel among themselves and struggle over supreme leadership within the group.

The main characters are all well developed, but the real strength of this novel is the fast pace and the plot twists. I agree with a prior review that the book would do well on the big screen. I've purchased the second book and am doing my best to not start it until I go on vacation this month. I'd highly recommend purchasing Host of the Armageddon, especially before the publisher realizes they have way under priced the Kindle Edition of these books.
Read more
Helpful
Comment Report abuse

Jon Meyer
5.0 out of 5 stars Fast Paced, Action Packed and Different! - Highly Recommended
Reviewed in the United States on September 25, 2012
Verified Purchase
I am not one to review items I purchase on Amazon, let alone the books I have read (I am an Amazon Prime power shopper and have yet to leave a review! I know, I know, shame on me). However, upon reading Ken Smith's Host of the Armageddon I feel compelled to write a review.

In short, the book is a fast-paced adventure through the modern-day middle east infused with the fast-paced action and excitement of a Clive Cussler novel and the fantasy/mythology of movies like The Mummy. I have to say, this story would lend itself perfectly to a screen play some day....

Pros:
- Not your ordinary action/fantasy novel. It takes place all over the middle east
- Main character is a woman
- Involves a unique and interesting concept and dark force - The four horsemen
- Lots of action, detail, and intelligence in Ken's writing
- The story line is not predictable - lots of plot twists and turns
- Pages fly by... you'll catch yourself staying up late to finish just one more chapter!

Cons:
- Tends to be a bit too much detail in the first few chapters of the book at the expense of good dialogue
- One or two other nit picks I can't remember - not too many gripes

WHY YOU SHOULD BUY AND READ THIS BOOK:
- It is unlike other books of its genere
- The premise and concept is unigue, refreshing and different
- It's a fast-paced ride full of twists and turns that are not predictable
- Book two is in the works!
Read more
3 people found this helpful
Helpful
Comment Report abuse

Elaine
5.0 out of 5 stars a great read
Reviewed in the United States on July 20, 2013
Verified Purchase
I enjoyed this book tremendously. However, I did not enjoy the foul language part. A book that quotes scripture should not use foul language. Other than that it was an attention grabber. Hard to put down. Very captivating. Can't wait for the next book.
Read more
Helpful
Comment Report abuse

Felice L.
5.0 out of 5 stars Like an early Dean Koontz novel
Reviewed in the United States on March 8, 2013
Verified Purchase
For such an inexpensive price, this book delivers a lot of bang for the buck. Written in a fast-paced, energetic style, the book melds myth with today's world. It reminds me of an early Dean Koontz novel - idea driven, action-packed, with the violence that the title suggests, and maybe a bit rough around the edges.

Shows a lot of promise, and I'm looking forward to the next book in the series!
Read more
2 people found this helpful
Helpful
Comment Report abuse

Cstone
5.0 out of 5 stars Fascinating premise. Good read!
Reviewed in the United States on October 31, 2012
Verified Purchase
Host of the Armageddon was a nice read. The characters are well-described and the story is very appealing to those who enjoy sci-fi/fantasy. Kudos to the author on a job well done!
Read more
Helpful
Comment Report abuse

Kristie A. Traver
5.0 out of 5 stars PURCHASE THIS BOOK!
Reviewed in the United States on December 1, 2014
An addicting read by author Ken Scott Smith entitled The Horsemen Chronicles -- Book 1:Host of the Armageddon, published by Bedlam Press in 2012. DEFINITELY a book before it's time, so to speak! He brings a fresh, new perspective to the 4 Horsemen of the Apocalypse.... Imagine a world where, not only is there the constant war between Darkness and Light, but that every day occurrences are caused by the Horsemen themselves! Illness, school shootings, "freak" accidents - are all connected to the destruction laid by the Horsemen. That is, until one of them is vanquished, and the soul is looking for a new host! The novel focuses on the main character, Faye Monroe, a 27year-old Tel Aviv Times photojournalist whose life has been intertwined with the future of the Horsemen since she was too young to remember. That is, until seeing the face of a mysterious man who triggers memories long forgotten.... This sets her on her path to fulfill her destiny.

I don't want to give too much away, but it is a fast-paced ride through an age-old battle, and captured my attention from beginning to end (which is not an easy feat)! Ken Scott Smith keeps you on the edge of your seat, wondering where the story is heading. The characters are endearing, and believable, not to mention addicting!

We also have a second installment in the Chronicles, The Horsemen Chronicles®
Book II: Path of the Reliquary. Also published by Bedlam Press, in 2014. This brings back the main character, Faye, and (once again) the plot twists and turns as she continues her struggle to save humanity from the Horsemen! This is a smooth continuation of the story that keeps you guessing even more than the first book!

So head's up for all you Sci-fi/Fantasy fans out there in Radioland, you truly would enjoy checking out both books in the Chronicles!
Read more
Helpful
Comment Report abuse
See all reviews