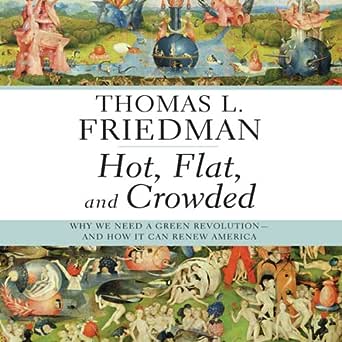 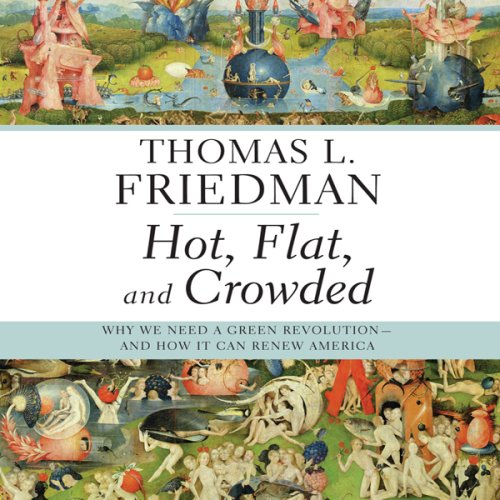 Hot, Flat, and Crowded: Why We Need a Green Revolution - and How It Can Renew America

Hot, Flat, and Crowded: Why We Need a Green Revolution - and How It Can Renew America
Thomas L. Friedman (Author), Oliver Wyman (Narrator), Macmillan Audio (Publisher)
Get this audiobook free.
$14.95/mo after 30 days. Cancel anytime

4.3 out of 5 stars
4.3 out of 5
360 global ratings
How are ratings calculated?
To calculate the overall star rating and percentage breakdown by star, we don’t use a simple average. Instead, our system considers things like how recent a review is and if the reviewer bought the item on Amazon. It also analyzes reviews to verify trustworthiness.
Top reviews

Andrew Desmond
VINE VOICE
4.0 out of 5 stars Greening Will Require Hard Headedness
Reviewed in the United States on April 20, 2011
Verified Purchase
By and large, the thesis of Thomas Friedman's new book, "Hot, Flat and Crowded" is correct. That is, the world is getting hotter, the world is getting "flatter" as globalisation erodes many of the differences between national economies and, of course, the world is becoming more crowded. We could argue the degree to which each of these phenomena is a problem but it is hard to argue that they are not occurring.

Having set the scene, Friedman then launches into a solution which involves a greening of the world. And this should occur not just in the USA and other industrialised countries but must reach into China and the newly developing world. Again, hard to argue here. However, I feel that the means that he proposes this greening is somewhat wishy washy. Greening will require significant market reforms. The world will need a carbon tax at least; more likely, there will be a need to develop a full carbon trading system. But herein lies the problem. The US has already rejected "cap and trade". Not a great start. Here in Australia where this reviewer resides, there is a fierce debate at present as to the need for any intervention at all. The government seems to be losing popularity by the day as it pushes a market based agenda. This is a shame. Hard choices need to be made.

In spite of my reservations, I enjoyed Friedman's book. He is a fine journalist at the top of his craft. His influence is significant and he has a loyal fan base. I only wish that he could be more hard headed. We are facing a serious challenge at the global level. This will require severe medicine. Friedman could have produced a better book by recognising this fact with greater determination.

George Fulmore
5.0 out of 5 stars "Sober Optimist" expounds on the future of the Planet
Reviewed in the United States on July 6, 2009
Verified Purchase
I read and reviewed Friedman's earlier book "The World is Flat," which I enjoyed very much. I like "Hot, Flat and Crowded" even better.

America got off track under Reaganism, which taught us that government is generally wrong, while private enterprise is more likely right. But what we found out was that what was good for General Motors (short-term) was not always good for the United States. "George W. Bush came into office bound and determined not to ask the American people to do anything hard when it came to energy," says Friedman. And, quoting a poet: "The trouble with our times is that the future is not what it used to be." And, from Friedman: "Our young people are so much more idealistic than we deserve them to be."

He warns us that we had "better understand this new era we're heading into." As for "crowded," he says that in 1800, the most populated city was London at one million. Today, there are more than 300 cities of one million or more. And, the world's current total population is about 6.5 billion, with a projection of about nine billion by 2050. As for "flat," the potential bad news is that more and more countries feel entitled to live the "American Dream," which may lead to an impossible demand for dwindling energy supplies. And, as for "hot," he tells us that global warming in for real, but that we humans continue to increase the amounts of carbon dioxide we are sending into the atmosphere.

When flat successfully meets crowded, another part of the world moves toward for the "American Dream." "We invented that system. We exported it. Others are entitled to it every bit as much as we are," he says, adding "To tell people they cannot grow is to tell them they have to remain poor forever." As an example, China is on course to have 130 million cars by 2050. And, in India, there are already gated suburban communities with golf courses, big homes and all the other amenities.

Currently, of course, Americans are by far the biggest energy hogs, consuming 9-to-30 times more energy than average folks in China or India now consume. And we are doing relatively little to curb our addiction to oil. We send hundreds of billions of dollars per year to Arab states for the stuff. Going green, per Freidman, "is now a national security imperative." And, per Friedman, Al Gore owes us an apology for his effort to alert the world about climate change and global warming. He underestimated the importance of his message.

Today, says Friedman, we have three varieties of those who deny global warming: First, those who draw a paycheck from companies with a vested interest in the status-quo; second, a small group of scientists who really believe that global warming is not true; and, third, those who see the issue mainly in political terms, hating government intervention and controls more than any possibility of global warming being for real.

So, where are we today? China is building another polluting coal-fired power plant every week. Forests are disappearing as we speak. Safe drinking water is a scarcity in many parts of the world. Twenty-five percent of the world's population has little access to electricity. And approximately 2.5 billion of the world's 6.5 billion people earn less than $2 per day.

Per Friedman, "Our environmental savings account is empty....It is pay now, or there will be no later....In a flat world, everyone can see what everyone else is doing, and the harm it is causing."

But there is hope. "The green economy is posed to be the mother of all markets," he says. "And the world is waiting for America to lead in this energy-climate issue." From the Japanese comes the Prius, which Friedman says" is not a better car. It's a better system." He adds, "We need many more people, companies, and universities trying many more things." We need "breakthrough innovation." But he says "real energy innovation is hard....We are not going to regulate our way out....we can only innovate our way out....We need 10,000 innovators, all collaborating with, and building upon, one another to produce all sorts of breakthroughs in abundant, clean, reliable, and cheap electrons and energy efficiency....Bottom line: America needs an energy technology bubble just like the information technology bubble." But Friedman knows that China is also a major player, saying "As China goes, so goes Mother Earth."

Ending the book, Friedman calls himself a "sober optimist," saying that we are all "Pilgrims again." "But if we rise to the challenge....we, and the world, will not only survive, but thrive, in an age that is hot, flat and crowded."

sneaky-sneaky
5.0 out of 5 stars A Crisis is a Terrible Thing to Waste
Reviewed in the United States on November 3, 2008
Verified Purchase
Thomas Friedman is the world's foremost writer on the subject of globalization, and that study has taken him in a new direction: Code Green. The impact of globalization has been worldwide growth and the emergence of new middle classes numbering in the hundreds of millions in "Chindia". Friedman has named these "Americums", foreign emulation of the U.S. lifestyle that includes large houses and conspicuous consumption. Unfortunately the global biosphere cannot continue to absorb these rates of consumption, and the planet is heating up while finite resources like coal, oil, timber, fresh water, and fresh air begin to run out. Friedman approaches all of these things as a challenge to the United States, a time in history to "outgreen" the competition and become the world leader in clean technologies.

Early chapters cover the relationship between the price of oil and relative freedoms inside countries like Iran and Russia, and Friedman makes some remarkable points such as "$70-a-barrel oil followed by $10-a-barrel oil killed the Soviet Union." The author's petropolitical analysis is worthy of a Nobel in economics, and he then moves on to discuss ways the U.S. can move forward on a new Green path, and how our current, painless "green party" comes up well short of being a Green Revolution.

Biologist E.O. Wilson has been writing about biodiversity for decades, but Friedman's new synthesis will bring these perspectives to a much wider audience. Mention of a "Sixth Extinction" currently being felt around the planet brings to mind Richard Leakey's 1995 book by the same name. Friedman includes quotes from Jared Diamond ("Collapse" "The Third Chimpanzee") and a host of other experts to bolster his case, and he then revisits China to measure their Green progress. Freidman's point is that if we don't get on it soon, China will outgreen the U.S. with its authoritarian advantage. Beijing has eliminated the two-stroke motor scooter and replaced it with millions of electric scooters and bicycles, and each night citizens carry their batteries inside to charge. Plastic supermarket bags have been banned, yes in one day, potentially 1.3 billion people stopped using plastic bags at the supermarket checkout.
"Hot, Flat, and Crowded" is Mr. Friedman's most important work to date, the summation of all of his previous thinking that has led to a grand insight about an American renewal fueled by Green. "Code Green" should be a cabinet-level department in the new administration and extraordinary powers handed out to meet an extraordinary financial and climatological crisis, and opportunity.
Read more
One person found this helpful
Helpful
Comment Report abuse
See all reviews

W. Carlson
3.0 out of 5 stars Good Book
Reviewed in Canada on February 10, 2011
Verified Purchase
The "used" book was in very good condition. The shipping took a bit longer than expected (3 weeks). I am satisfied with this seller.
Read more
Report abuse