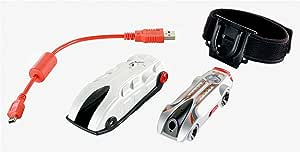 Film the world from the perspective of a racecar with the Hot Wheels Video Racer Micro Camera Car. Allowing 30-frames-per-second recording quality and holding up to 12 minutes of video, the Video Racer is the only 1/64 scale Hot Wheels car that doubles as an action camera. Download the free Video Racer editing software to upload your videos and share them with your friends!

Records up to 12 minutes of video. View larger.

Put Yourself in the Driver's Seat with Built-In Mini Cam

The Video Racer allows you to see the world through the eyes of a Hot Wheels driver. Slide the power switch toward the front of the car, press the Skull Button to switch into record mode, and start racing! The memory records up to 12 minutes of video as the Video Racer speeds along Hot Wheels tracks with instant playback on its LCD screen.

The Video Racer includes four attachment clips and an Action Cam protective attachment case that allow your car to travel on a variety of new terrains. Two of the attachment clips come with corresponding adhesive strips, allowing you to affix your car to places such as a bike helmet so you can film as you ride. The other two clips come with an adjustable strap so you can wear the Video Racer attached to your arm or wrist to film your stunts, no matter what sport you play!

The Video Racer editing software runs only on a Windows Operating System. Our Mac-using testers were happy to find, though, that they were still able to play their videos on the computer even if they weren't able to edit them.

Hot Wheels Video Racer Micro Camera Car: Get the Video Racer Video Camera Car with a built-in Mini Cam putting you in the drivers’ seat. See the world through Hot Wheels by racing on actual 1:64 scale Hot Wheels track while recording. The Video Racer car even has a built-in LCD screen for instant playback. The possibilities are endless. The Video Racer Micro Camera Car is the only 1:64 scale Hot wheels car and that doubles as an action camera. Included clips and straps, it can also be attached to bikes, helmets, skateboards, almost anything. The Video Racer Micro Camera allows 30 frames per second recording capability and can record up to 12 minutes of video. Also the built in LCD screen on the undercarriage allows for instant feedback to see if the right shot was captured or not. Create, Edit and Share Your Videos. CREATE: Film all your stunts by sending your Video Racer car down Hot Wheels track or by mounting the Video Racer car on other surfaces such as bikes, skateboards, etc. EDIT: Get creative. Add music and graphics to your video for the ultimate Hot Wheels experience. Exclusive software will allow you to edit and create your own movies. It is pre-loaded with graphics, sounds effects and even music.  Create an instant movie from all your clips with a single click. SHARE: Connect with friends or upload online so everyone can see your world through Hot Wheels.

4.0 out of 5 stars
4 out of 5
85 global ratings
How are ratings calculated?
To calculate the overall star rating and percentage breakdown by star, we don’t use a simple average. Instead, our system considers things like how recent a review is and if the reviewer bought the item on Amazon. It also analyzes reviews to verify trustworthiness.

Tool Fan
4.0 out of 5 stars This Car is AWESOME.... BUT...
Reviewed in the United States on February 2, 2019
Verified Purchase
The fact that you can record track video is really cool, on top of transferring the video to my pc and then stream to the TV which the car also records sounds also. This is REALLY cool, as my son really loves this thing. The only thing I don't like is that the car design is a tad too long where it cannot make turns and always falls off the tracks, therefore, most suited for straight runways only.

Otherwise this is really cool!

Rick
1.0 out of 5 stars It would be nice if it could...
Reviewed in the United States on June 3, 2019
Verified Purchase
It's longer than most Hot Wheels and won't navigate the curves. It makes it on a few however it gets stuck on most of them. Mostly just a disappointing purchase.
Read more

Allie
4.0 out of 5 stars Pretty good, fun for kids
Reviewed in the United States on December 15, 2013
Verified Purchase
I purchased this for my 7 year old son on sale, and he has really enjoyed it. My husband and he have had hours of fun using all the Hot Wheels track we have to create videos of their daredevil loops and jumps. The editing software is basically useless, so either plan on not editing your videos, or you can use whatever comes with Windows or Mac to do basic editing. The camera isn't sophisticated enough to the loops and jumps properly. If you do buy it, you may want to make sure you use it in a lot of light, so your video is clear. I am hoping that the next generation of this product is more high tech, because the concept is pretty awesome. We give this 3 stars as adults, and 4 stars as a kid.
Read more
One person found this helpful
Helpful
Comment Report abuse

Kindle Customer
5.0 out of 5 stars Great for the price...
Reviewed in the United States on January 12, 2014
Verified Purchase
My 5 year old son thinks this is the greatest invention ever. Spent hours with it (45 minute battery time and then an hour while watching the videos and it charged) but, for some reason, he thought it would be a fabulous idea to put it in the dog's water bowl to see what happened. Of course, it stopped working and he cried a lot. We put it in some rice and, less than 24 hours later, it works again. Kind of glitchy but the screen works and it still takes video. For the $15 we paid for this one, I'm amazed. Not that I would suggest trying this yourself but it worked for us...
Read more
4 people found this helpful
Helpful
Comment Report abuse

Sheepdog
5.0 out of 5 stars One of the best "toys" for multiple ages, and favorites in our house.
Reviewed in the United States on July 12, 2016
Verified Purchase
My sons love these car cameras, and always seem to find new ways of attaching or using them. They have been used as "spy cameras", on race tracks, attached to bicycle helmets, remote controlled vehicles, etc... The small size and ease of use has shown their applications to be almost limitless.
The construction of the cars is great, and I've seen them take lots of abuse. The video quality (although not high definition) is very clear; and they record in real-time (no jerky video). The video files are easily transferred to any computer with a simple USB cable, and can be played back or saved without any additional software.
The cars come with multiple attachments for secure mounting as an action camera.

Like you, I base my purchase decisions on the experiences of others. If you liked my review, or felt that it was helpful to you, then please let me know by clicking “yes” below. I would also be happy to answer any questions that you may have about this product. Thanks!

My reviews are real, and typically based on weeks of actual product usage. My opinions are not copied from other reviews, and are from my own personal experiences.

cme_phx
5.0 out of 5 stars Nephew likes the "go-pro" style mode as well as the dynamic car point of view
Reviewed in the United States on November 5, 2013
Verified Purchase
Got very positive feedback from Nephew on the camera / car itself - and I got great Lightning Deal on it.

His only complaint is that the Video Editing software that they provide is kind of worthless.

So just use a stand alone video editor and you should be good to go.

He also likes the "go-pro"-style wearable mode as well as the dynamic car point of view.

sailingsoon
5.0 out of 5 stars Child Very Excited
Reviewed in the United States on April 9, 2014
Verified Purchase
Got this for a birthday gift for my 6-year old grandson and he absolutely loved it. Never saw his eyes light up so much after opening a gift from me, so I'm thinking I did very well with this choice. I'm not sure about performance because I haven't heard back on that yet, but this gift was apparently very well received. Score one for Grandma!
Read more
One person found this helpful
Helpful
Comment Report abuse
See all reviews

Page 1 of 1 Start overPage 1 of 1
This shopping feature will continue to load items when the Enter key is pressed. In order to navigate out of this carousel please use your heading shortcut key to navigate to the next or previous heading.
Back
Next
Pages with related products. See and discover other items: car slide, skateboard for 7 year old, speed racer cars, big wheel bikes, big wheels bike, camera for kids