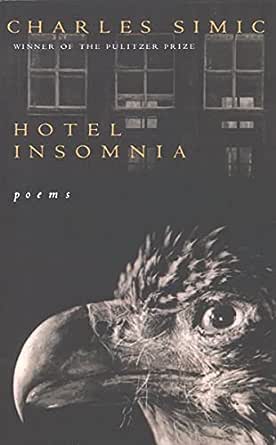 Flip to back Flip to front
Audible Sample Playing... Paused   You are listening to a sample of the Audible narration for this Kindle book.
Learn more
ISBN-13: 978-0156421829
ISBN-10: 0156421828
Why is ISBN important?
ISBN
This bar-code number lets you verify that you're getting exactly the right version or edition of a book. The 13-digit and 10-digit formats both work.

“Poems . . . like folk tales told by a child with an impishly surrealistic streak” from the Pulitzer Prize-winning author of The World Doesn’t End (Library Journal).

In this volume, “Simic writes so simply that his words fall like drops of water, but they ripple outward to evoke an ominous and numinous world” (The Washington Post Book World). He fills the wee hours of his poetry with angels and pigs, riddles and cemeteries. With empty offices and dolls that smile. With the sound of bare feet upstairs and a single kiss before the shadows converge.

His is a rich, haunted world of East European memory and American present—a world of his own creation, one always full of luminous surprise.

“The poems . . . come from a vision of the world that, once experienced, prevents us from ever dozing again, that prevents us, for that matter, from feeling confidently awake.” —Los Angeles Times

“One of the most original poets writing today, Simic has a gift for startling juxtapositions . . . Homely images, in Simic’s hands, take on an eerie combination of the marvelous and the absurd . . . There are few poets writing today whose sense of wonder is so palpable.” —Library Journal

“He has infused American poetry with the freshest and most original style and imagery since e.e. cummings.” —St. Louis Post-Dispatch

“His poems are crowded with uncanny presence, which he challenges with flirtatious directness.” —The New Yorker
Read more

"Memory makes you hungry," writes Simic, whose poems are like folk tales told by a child with an impishly surrealistic streak. Memories of shadowy streets and rooms are haunted by an insomnia that suggests an enchanted dreamtime of watchfulness and revelation, where "everything is a magic ritual,/ a secret cinema." One of the most original poets writing today, Simic has a gift for startling juxtapositions: "Sleeplessness, you're like a pawnshop/Open late/ On a street of failing businesses." Homely images, in Simic's hands, take on an eerie combination of the marvelous and the absurd, "Father studied theology through the mail/ and this was exam time./Mother knitted. I sat quietly with a book/full of pictures. Night fell./ My hands grew cold touching the faces/ of dead kings and queens." There are few poets writing today whose sense of wonder is so palpable: "happiness, you are the bright red lining/of the dark winter coat/ grief wears inside out." Recommended for all collections.
-Christine Stenstrom, Shea and Gould Law Lib., New York
Copyright 1992 Reed Business Information, Inc. --This text refers to an alternate kindle_edition edition.

In this new volume, Pulitzer Prize-winning Charles Simic fills the wee hours of his poetry with angels and pigs, riddles and cemeteries. With empty offices and dolls that smile. With the sound of bare feet upstairs and a single kiss before the shadows converge. --This text refers to an alternate kindle_edition edition.
Read more

If I ever meet Charles Simic, I am likely to ask that one question every author really hates: "Where do you get your ideas?"

It's not that the overarching, grand design of Simic's work is incomprehensible or anything. In fact, in Hotel Insomnia, if anything, it's more noticeable than ever; for once, the book's title really does tie into almost everything in the book. Insomnia is a major theme in these poems, and it runs throughout like a bad infomercial on late-night TV in the background, bleary-eyed, beer in hand, in its boxer shorts, and yet strangely appealing.

No, it's not that. It's in the details, those damnable little snippets of poetry that make Charles Simic's poems little gems of wide-eyed brilliance:

"There's a painting over the cash register:

Of a stiff Quaker couple dressed in black.

They hold a cat under each arm.

One is a tiger, the other is Siamese.

The eyes are closed because it's very late,

And because cats see better with their eyes closed."

This is a guy who knows something about you. No matter who you are. And in every book he releases, he will reveal a little of it, until you're paranoid, hiding in a darkened room, peeking out of the blinds, unable to sleep, just waiting for Charles Simic to come knocking on your door, because you're convinced he's coming for you.