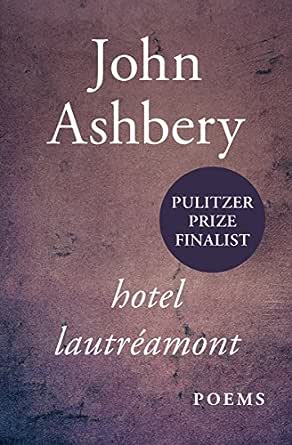 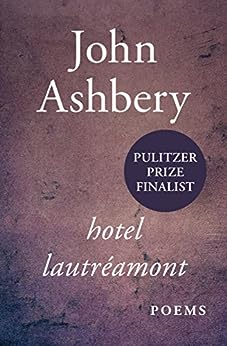 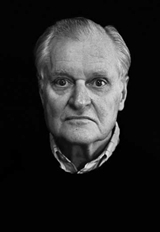 “No poet is more surreal, more disjunctive and musical, more subtly allusive (note the nod to Stevens in ‘It Must Be Sophisticated’) than John Ashbery. In Hotel Lautréamont he is also tremendously funny. You don’t have to understand these poems to love them; you need only that suspension of disbelief that constitutes an audience’s pleasure before the magician’s flourishes and wonders.” —Michael Dirda, The Washington Post Book World

“The career of a great writer must be one of constant self-renewal, and [Hotel Lautréamont] provides evidence of [Ashbery’s] continuing poetic development. The epic intent of his previous volume, Flow Chart, has been replaced here by the more characteristic mood of his lyrics and elegies; but these are shorter poems which display an increased command of language and of form. Stemming in part from Mallarmé and in part from Whitman, Ashbery’s work creates a tension in which the fine networks of linguistic reverie are balanced by the strong sense of an American tradition.” —Peter Ackroyd, The Times Literary Supplement

“Like Emerson’s essay ‘Experience,’ these poems lament that the magnitude of what we feel is so much less than the magnitude of our losses. . . . And for all the talk by academic critics of difficulty in his work, Mr. Ashbery is extremely forgiving, a poet, like Wordsworth, of superb passages who doesn’t insist that one dig out the gold in every line. His virtuosity is amiable, never affecting to dangle readers over the abyss.” —Tom Sleigh, The New York Times

“Ashbery’s phrases always feel newly minted; his poems emphasize verbal surprise and delight, not the ways that linguistic patterns restrict us. This sense of freedom is produced by Ashbery’s diction (no American poet has had a larger, more diverse vocabulary, not Whitman, not Pound) as well as his formal choices. . . . Yet his work is permeated by a sense of urgency. He writes to outpace his last thought, refusing to rest in it, proceeding at a rate that is not hurried but dogged, in it for the long haul.” —Langdon Hammer, The New York Times Book Review

“Hotel Lautréamont traces an exile—an ambulatory self-exile in both senses of the term: of the voluntarily chosen, deeply wanted, and escorted, and of the self that walks out on the self until it runs out of land. . . . Ashbery’s exile is positive, the fulfillment of a promise, the reconciliation with a stranger who never faces you, but keeps looking onward, drawing you out. In his configuration, exile is the refusal to be rendered homeless by constituting that home everywhere.” —Cole Swensen, Conjunctions

John Ashbery was born in 1927 in Rochester, New York, and grew up on a farm near Lake Ontario. He has authored more than thirty books of poetry, fiction, drama, and criticism, his work has been translated into more than twenty-five languages, and he has won numerous American literary awards for his poetry, including a MacArthur Fellowship, two Guggenheim Fellowships, and a National Humanities Medal. His book Self-Portrait in a Convex Mirror (1975) won the Pulitzer Prize, the National Book Critics Circle Award, and the National Book Award. For many years, Ashbery taught graduate and undergraduate poetry courses at Brooklyn College and Bard College, and his most recent book of poems is Quick Question, published in 2012. He lives in New York.

Blandishments, chitchat, jokes, parodies, personae and all kinds of slang circulate freely through Ashbery's ( April Galleons ) latest collection. As always, his work will frustrate readers who must know just what it's about. Curious and spectacular details no sooner come up than they vanish; distractions and even boredom have their places; and Ashbery's central preoccupations--passing time, the ambiguities of identity--are as ordinary as they are enduring. The title of the volume alludes to the self-styled Comte de Lautreamont, a 19th-century French author much admired by the Surrealists. By putting the count's name to a commercial establishment for travelers--or providing him with a family seat--Ashbery leads us to consider his relation, as an American, to the traditions of French poetry. He is a past master at slipping across established boundaries of discourse, and the limit of his work is perhaps that it is so entirely urbane. Tempered by irony, his poems are mitigated by sentiment, as if their author is resigned to the fact that the conventions they send up are about as satisfactory as anything gets. Still, the poems continually surprise us with the question of what to make of them. Are they psychological evocations, linguistic abstractions, a commentary on the way we live now, confused echoes of a redeemed tongue, or simply arbitrary in their inspiration? Ashbery's art allows for all these readings--and then some.
Copyright 1992 Reed Business Information, Inc. --This text refers to an alternate kindle_edition edition.

In Ashbery's great work, the mysterious surfaces and atmospheres of his poetry are charged with a unique power, as evasive yet as luminous as an aurora borealis, rendering his difficulties well worth the undertaking for serious readers. Unfortunately, in his first book since last year's Flow Chart ( LJ 5/1/91), Ashbery seems caught in a tedium vitae that flattens out his best effects with inconsequences, the elegiac occulted by the depressive. In this collection, too long by at least half, Ashbery alternates between launching his style in a more jarringly surrealist direction and just meandering along, "living the life/ reserved for those who have never thought things out clearly," telling us "To mope/ is human; I mope, therefore I am." There are some lovely poems here, but they are crowded out by many lesser renditions written in the manner to which their author is perhaps too accustomed. For completists.
- Frank J. Lepkowski, Oakland Univ., Rochester, Mich.
Copyright 1992 Reed Business Information, Inc. --This text refers to an alternate kindle_edition edition.

But it is shrouded, veiled: we must have made some ghastly error.

You mop your forehead with a rose, recommending its thorns.

Must we thrust ever onward, into perversity?

Only night knows for sure; the secret is safe with her.

You mop your forehead with a rose, recommending its thorns.

Research has shown that ballads were produced by all of society;

Only night knows for sure. The secret is safe with her:

the people, then, knew what they wanted and how to get it.

-from "Hotel Lautramont" --This text refers to an out of print or unavailable edition of this title.

A book reader
5.0 out of 5 stars Surrealism that shatters and renews your vision
Reviewed in the United States on July 10, 2011
Ashbery is, it may be argued, the most imaginative, creative, wonderfully empathetic, and worldly poets writing. He brings Keats' concepts of Negative Capability to bear on our experience with each other, our feelings and self consciousness, and the sneaky unconscious, that wears its mask in the darkest of places. Although many of these poems deal with themes full of darkness and deep weight, like the ocean fathoms, they are composed of moments of lightness, love, and sheer whimsy. The reader is always slightly out of place at the start or end of a poem, but it allows a kind of subtle fog to spread through the mind like faraway birds: "Where are you? Where you are is the one thing I love, / yet it always escapes me, like the leaves in their lilacs, / too busy for just one answer, one rejoinder." His visions are cemented with mortar and Elmer's glue from the dreams and lost loves that we notice in the subway of our sleep but which we must sacrifice for bread and tea. His poems rustle the dreams of our musing cities and make the metropolis of experience fall like orange trees. I can't come close to describing it. Ashbery is brilliant.
This book will shatter and repair your imagination like fog made of glass.

Driver9
5.0 out of 5 stars Ashbery Deserves Better
Reviewed in the United States on February 12, 2005
This intriguing, surreal book of poems does not deserve the nasty treatment dished out by the (until now) sole reviewer of this book. I was appalled not just by the mean-spirited nature of the review but also by how strikingly different my impression of Hotel Lautreamont is. It is as though we read two different books. Whatever grudge the earlier reviewer is obviously harboring toward Mr. Ashbery, please do not let this pedantic vocabulary fetishist deter you from a truly rewarding experience.

PS: The uninformed slur on General Grant is worthy of a duel!