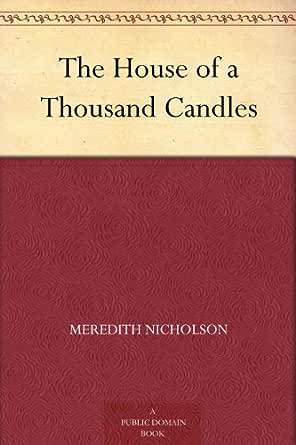 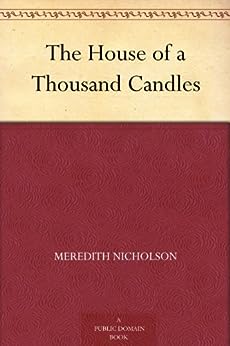 The House of a Thousand Candles Kindle Edition

Meredith Nicholson (1866 – 1947) was a best-selling author from Indiana, United States, a politician, and a diplomat. Largely self-taught, Nicholson began a newspaper career in 1884 at the Indianapolis Sentinel. He moved to the Indianapolis News the following year, where he remained until 1897. He wrote Short Flights in 1891, and continued to publish extensively, both poetry and prose until 1928. --This text refers to an alternate kindle_edition edition.

3.9 out of 5 stars
3.9 out of 5
29 global ratings
How are ratings calculated?
To calculate the overall star rating and percentage breakdown by star, we don’t use a simple average. Instead, our system considers things like how recent a review is and if the reviewer bought the item on Amazon. It also analyzes reviews to verify trustworthiness.
Top reviews

Beckett ShionaTop Contributor: Pets
3.0 out of 5 stars Interesting Despite the Unlikeable Protagonist!
Reviewed in the United States on March 13, 2016
Verified Purchase
I usually enjoy classic mystery, despite the somewhat stilted language and dated attitudes. And I did enjoy this story, set in a fictional Indiana county, despite the fact that the protagonist -- supposedly a 27-year-old man -- was so immature and bad-tempered that he was often downright unlikeable. He was also so incredibly dense that it's a wonder he could get up in the morning and tie his own shoes. (Thank heaven he was only supposedly living in Indiana, and not a Hoosier. That would be a real slur on my fellow citizens.) There were a few howlers throughout the story (tiger hunting in Africa?!) that were unintentionally hilarious, although the existence of orders of Anglican nuns is not, as some of the reviewers on this page tend to think, all that unusual, especially in the previous century. The Kindle version contained some sudden repeats of a sentence throughout, centered, and seeming to make no sense until I realized they were likely captions left over from an earlier illustrated edition. They were very disconcerting, though, and should probably be removed if an updated edition is issued. A nice little twist at the ending made the book worth wading through, although I have to admit a good deal of skimming here and there when the tale bogged down in its own self-importance.
Read more
5 people found this helpful
Helpful
Comment Report abuse

Madeleine R. Myers
VINE VOICE
5.0 out of 5 stars A surprising little gem of a novel!
Reviewed in the United States on June 28, 2018
Verified Purchase
I picked up this book on a whim, unfamiliar with the author, not expecting to find an engaging little mystery with characters both appealing and intriguing, with well-sustained suspense that kept the pages turning. The author gave enough hints that some of the plot twists were predictable, but he saved the best and most surprising for the dramatic climactic final conflict and resolution. I will definitely be reading more of Nicholson's work soon.
Read more
2 people found this helpful
Helpful
Comment Report abuse

larry p
3.0 out of 5 stars Not Exactly Timeless, but OK
Reviewed in the United States on December 4, 2013
Verified Purchase
My spouse recently found an old newspaper from 1905 behind a mirror on an old piece of furniture we had bought in Cambridge when we were newly weds, back in the dark ages. Interestingly, the paper was from Baltimore, the city of my birth. How it got into a mirror on a bureau in Cambridge, MA is a mystery.

Anyway, one of its pages listed some books one might buy as Christmas presents. The list had little summaries. I decided to check a few of them out. I could find several of the authors listed, but not the books listed with them, with one exception. I did find The House of a Thousand Candles by Meredith Nicholson. Actually, that's not quite true. I found a couple of the others, but only in pay form. I won't pay for books on kindle unless I actually own them, i.e. can lend them or give them away with impunity.

Whatever, this book is a sort of gothic novel, I suppose. A young man inherits a strange old, unfinished mansion in the Indiana woods, but only on the proviso that he lives in the house for a full year, that he doesn't have a bunch of live-in guests, and that he doesn't leave, other than for short trips into town (an easy 2-mile walk--yes people used to walk to get places and 2 miles wasn't all that unusual.) to the post office and such like.

As soon as he gets to the house, someone tries shooting him through the window. He begins to hear weird sounds, e.g. foot steps in the walls. He hears snatches of conversation that tells him people are out to get him. People think there's buried treasure of some sort in the house, but no one can find it. There's a girls school, run by nuns, protestant ones no less, just on the other side of the wall, and at least one of the school's inhabitants is bewitching. And so forth.

This is not deathless literature, and is obviously dated. Some of the attitudes expressed in the book are a bit creepy to a more modern sensibility (e.g. attitudes toward women and "rubes", i.e. midwesterners--oh wait some folks still think we're ignorant rubes [I have midwestern roots and lived in both Kansas and Ohio for extended periods of time]). But it's an interesting enough yarn and perfectly fine escapist literature, even if the main character is a bit of an ass. I've read much worse.

John Nettnin
5.0 out of 5 stars A surprising and spellbinding story
Reviewed in the United States on September 24, 2018
Verified Purchase
I couldn’t put this book down. It was compelling. It’s a must read. The characters were believable and described so well. Read it, you won’t be disappointed!
Read more
One person found this helpful
Helpful
Comment Report abuse

s.m.s.
5.0 out of 5 stars Hoosier gem
Reviewed in the United States on December 11, 2015
Verified Purchase
While it is not the most noteworthy or amazingly written book I've ever read, it is very endearing. I was raised in Indiana, and it is not often that a period piece, contemporary in its time, can be found for we, hoosiers. The disposition of the Hoosier author and his limited view of the world can really be felt. He writes about the far off lands as they were believed to be at that time, and how hopes them to be. He describes his mid-western world enough to be charming, and anyone from Indiana - then and now- could honestly relate. If you would like to read a romanticized period piece set in Indiana just after it transitioned from being part of the "Indian Territory", please read this delightful novel. It won't take you long, but you'll enjoy it.
Read more
2 people found this helpful
Helpful
Comment Report abuse

Kindle Customer
2.0 out of 5 stars Mediocre Pulp Fiction
Reviewed in the United States on May 24, 2013
Verified Purchase
This book was an okay way to pass a long afternoon. But the plot was not great, the characters were not particularly memorable, and the writing was just average.
Read more
Helpful
Comment Report abuse

Fflur
2.0 out of 5 stars Slow and boring
Reviewed in the United Kingdom on August 25, 2018
Verified Purchase
Very dated with a weak plot. So slow and plodding that I COULD NOT CONTINUE.
Read more
Report abuse